The Inclusion of the Microalga Scenedesmus sp. in Diets for Rainbow Trout, Onchorhynchus mykiss, Juveniles

Fish oil is a source of “healthy” polyunsaturated fatty acids that decrease the risk of cardiovascular and other chronic diseases in humans. One possible way to increase consumption of these fatty acids is to incorporate them into pork via pig-feed. We enriched the pigs’ diet with 8% fish oil and found a several-times higher content of the above-mentioned fatty acids in the pig meat in comparison with controls. The meat of the fish oil-fed pigs was also more tender. We also used the same pigs as a model for testing the effects of the high level of dietary fish oil on selected markers of their state of health and detected an increased level of plasma lipids (risk factor for cardiovascular diseases) and a possible overreaction of the immune system. In conclusion, we can recommend consumption of polyunsaturated fatty acids-enriched “functional” pork, but direct human consumption of fish oil should be limited and in accordance with the recommendation of a moderate intake.

There were two objectives of the present study using dietary fish oil (FO) in pigs: to use pigs as a model for studying the effects of high FO doses on selected physiological markers; and to evaluate the physical traits and nutritive value of pork enriched with long-chain polyunsaturated fatty acids n-3. Two groups of six female pigs were fed for 30 days with either a standard feed mixture (control, C) or the same mixture supplemented with 8% FO (F). Physical characteristics of the muscle, fatty acid deposition in tissues and selected hematologic and plasma markers were tested. The daily weight gain of the F-pigs was lower in comparison with controls (p < 0.05). Dietary fish oil decreased Warner-Bratzler shear force of the longissimus muscle (p < 0.01). The eicosapentaenoic and docosahexaenoic acid content was higher (p < 0.05) in all tested F-tissues. Dietary fish oil had no effect on plasma cholesterol (p < 0.05), but it increased plasma triacylglycerol levels by 260% (p < 0.05), and increased counts of leukocytes, neutrophils, and eosinophils in the blood plasma (p < 0.05). In conclusion, high dietary FO improved the texture and nutritive value of meat, but negatively affected plasma biochemical parameters. View Full-Text
Keywords: docosahexaenoic acid; plasma triacylglycerols; neutrophils; transaminases; Warner-Bratzler shear force docosahexaenoic acid; plasma triacylglycerols; neutrophils; transaminases; Warner-Bratzler shear force
►▼ Show Figures 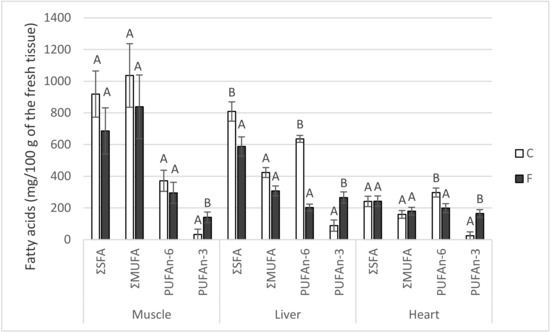