Building Bridges between Theory and Practice: How Citizen Science Can Bring Equine Researchers and Practitioners Together

Selection for high egg production in laying hens has led to an increased calcium requirement and consequently to an intensified calcium mobilization from the bones. However, excessive demineralization can lead to osteoporosis, which is manifested by a high incidence of bone-damaged hens. In this study, we characterized the adaptation response of laying hens to a repeated dietary calcium restriction (1.09% instead of 4.26% calcium) by means of egg production, eggshell quality, body weight and bone stability. The animal model included four layer lines differing in performance level (high vs. moderately performing lines) and phylogenetic origin (white-egg vs. brown-egg layers). We assumed that the high performing lines would respond by maintaining egg production level at the expense of eggshell quality and bone health. Egg production and eggshell quality declined considerably and bone demineralization occurred in all lines. Contrary to our hypothesis, there was evidence that phylogeny rather than performance level influenced the hens′ response. The brown-egg lines appeared to be more tolerant to the calcium depletion, while the white-egg lines were more sensitive. Our findings demonstrate the influence of genetics on the adaptive capacity of chickens and underline the importance of preserving genetic variability to cope with potential future environmental challenges.

In modern laying hybrids, calcium (Ca) homeostasis is immensely challenged by daily eggshell calcification. However, excessive mobilization of Ca from bones may lead to osteoporosis, which then manifests in a high incidence of poor bone quality. The aim of this study was to characterize the hens’ adaptation response to an alternating dietary Ca restriction. The animal model consisted of four purebred layer lines, differing in laying performance (high vs. moderately performing lines) and phylogenetic origin (white- vs. brown-egg lines). According to the resource allocation theory, hens selected for high egg production were assumed to show a different response pattern to cope with this nutritive challenge compared to moderately performing lines. Data collected included egg number, egg quality traits, body weight and bone characteristics. The Ca depletion led to a temporary drop in egg production and shell quality and a loss of bone stability due to Ca mobilization. The white-egg lines response was more pronounced, whereas the brown-egg lines were less sensitive towards reduced Ca supply. Our study shows that the hens’ responsiveness to coping with a nutritive Ca depletion is not ultimately linked to genetic selection for increased egg production but rather to phylogenetic origin. View Full-Text
Keywords: bone strength; egg production; eggshell quality; calcium depletion; laying hens; phylogeny; recovery bone strength; egg production; eggshell quality; calcium depletion; laying hens; phylogeny; recovery
►▼ Show Figures 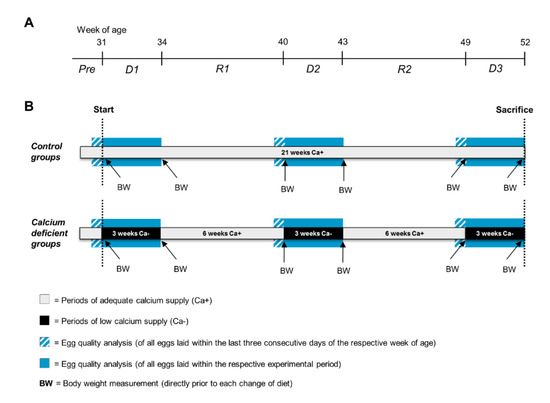