Response to Wolf et al.: Furthering Debate over the Suitability of Trap-Neuter-Return for Stray Cat Management

The Impact of Return-to-Field and Targeted Trap-Neuter-Return on Feline Intake and Euthanasia at a Municipal Animal Shelter in Jefferson County, Kentucky

Nearly three-quarters of a million cats and dogs were euthanized at animal shelters in the United States in 2018. This total represents a decline of more than 90% in such deaths at USA shelters since the early 1970s. The majority of animals euthanized in shelters today are free-roaming feral and stray cats. Two new approaches to the management of free-roaming cats—return-to-field (RTF) and targeted trap-neuter-return (TNR)—have grown in use over the past decade and have recently been associated with significant reductions in shelter euthanasia and intake. RTF programs are similar to TNR programs in that they entail the sterilization, vaccination, and return of cats; however, RTF programs are shelter based rather than community based. RTF programs provide live outcomes for community cats otherwise at high risk of euthanasia after shelter admission. The purpose of the present study was to examine changes in feline euthanasia and intake, as well as additional shelter metrics, at a municipal animal shelter in Jefferson County, KY, USA, after an RTF program was added to an ongoing community-based TNR program. The euthanasia of cats at Louisville Metro Animal Services (LMAS) declined by 94.1% and feline admissions dropped by 42.8% after a combined total of 24,697 cats were trapped, sterilized, vaccinated and returned over an eight-year period. The results of the present study are consistent with previous research and illustrate the amenability of RTF and TNR programs to customization based upon the needs and resources of a given community. 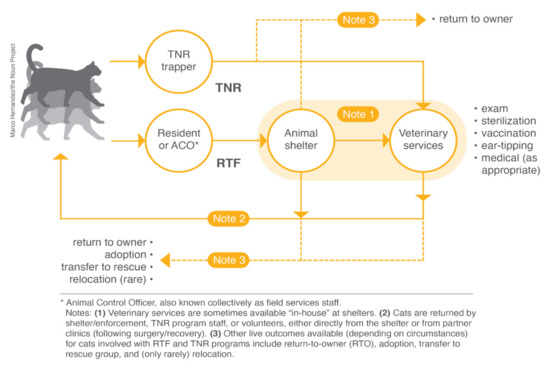