The U.S. pet population is increasing, but access to veterinary care continues to be a concern. One method of alleviating barriers that prevent access to care is the presence of pet health insurance for a pet. Dog owners were surveyed to see the impact of pet health insurance on dog owners’ visits and expenditures at the veterinarian. Using several models, it was found that pet health insurance had a significant and positive impact on the amount spent at the veterinarian. Other dog and dog owner characteristics were found significant in impacting expenditures and visits at the veterinarian. Findings from this study can help address the accessibility issue facing Americans across the country in obtaining affordable pet care. This research is the first which seeks to identify the driving factors behind dog owners’ choices regarding health care for their dogs.
Keywords:
pet health insurance; pet ownership; access to care; OLS; negative binomial regression; multinomial logistic regression

Pet owners have elevated their pets to an unprecedented level of companionship, treating the pet as a family member, instead of being viewed as property [1,2,3,4,5,6,7]. In the United States there are an estimated 63.4 million households that own at least one dog, and 42.7 million households that own at least one cat [8]. In a pet owner survey by Packaged Facts, 95% of dog owners and 94% of cat owners agreed (strongly or somewhat) that they considered their dogs or cats to be a part of the family [9]. This is even more so among millennials. In a survey by Weave of 532 millennials, almost 90% of this cohort would put their animal’s life before theirs, and over 90% of millennials care about their pets’ health equally to their own health [10]. With this high reverence for pets, and the willingness to care for a pet’s wellbeing, the need for pet healthcare is evident. For humans, the U.S. health-care industry has medical insurance to help cover visits and treatments for human healthcare. It is also the same for the pet care industry, but currently a lot less regulated [11]. Pet health insurance, like human health insurance, helps pay for the costs of treatments that are difficult to foresee in the future [11]. Policy holders pay a small, known monthly premium to avoid significant financial burdens in the future. However, the presence of an insurance product can sometimes change a consumer’s behavior, such as increasing the number of times one visits the doctor or admitting themselves into a hospital [12]. It is also seen that pet owners with pet health insurance have a higher tendency to spend more towards the end of a pet’s life (similar to humans with health insurance) [11]. Veterinarians and the veterinary care team can take on an important role in showing the benefits of pet health insurance for the owner as an option for payment, but also benefiting the veterinarian and practice as well.
In this article we employ several models looking at different characteristics of dog and dog owners to see what impact the characteristics have on a dog owner’s decision to visit and spend more at the veterinarian, as well as decide between euthanasia or choosing for more expensive treatment options. In particular, the presence of pet health insurance is of interest because it can help pet owners afford veterinary expenses that they may not otherwise be able to afford at the onset of a pet crisis, and the veterinarian is able to give the best care the pet needs without economic limitations from the owner. This research is the first which seeks to identify the driving factors behind dog owners’ choices regarding health care for their dogs.

While dog ownership has gained popularity, with over 38% of households owning dogs, the number of visits to the veterinarian, for both dogs and cats, have seen a decline over the years. For example, in 2011, dog-owning households visited the veterinary clinic or hospital about 130.4 million times, an increase of 9% from 2006; by 2016, total visits had fallen to 123.3 million [3]. While there has been a decline in the number of visits, the average veterinary expenditure per visit has risen from $138 to $161 and has outpaced U.S. inflation; this is due to increased labor costs, rising costs of medical equipment and supplies, and more, all contributing to more expensive veterinary care [3]. The 2016 NAPHIA study revealed that pet health insurance increased pet expenditures at the veterinarian, as well as increased the number of visits. Specifically, 29% of dog owners and 81% of cat owners spent more per year on veterinary care [16].

While research has looked at factors associated with increased expenditures and visits at a veterinarian, top reasons for a pet owner not bringing their pet to the veterinarian is because the animal was not sick or injured, and because the owner did not have money to pay for it. Interestingly, 5% of pet owners also stated that cost of care was more than they thought it was worth, versus 23% saying they lacked the money to pay for care [3]. In other words, the issue was less about a lack of perceived value and more about inability to afford veterinary care. A 2019 study by the United Veterinary Services Association revealed that 48% of pet owners are not fully satisfied with the veterinary clinic they go to because of cost/price issues; however, this study also showed that over 95% of cat and dog owners were satisfied with the quality of medical care (excluding cost factors) they received for their pets [17]. Owners not having money to pay for a veterinary service is an issue. Based on the roughly 30% of pet owners that do not see a veterinarian at least once a year, and the average expenditure per pet, this translates into $7 billion of veterinary care not being delivered to animals. This is a miss for the economic sustainability of the veterinary practice but also for the livelihood of pets [20]. In these studies, seeking out veterinary services was not a matter of perceived value, but the lack of affordability to pay for those services. One way to alleviate the access to care issue is the presence of pet health insurance.
Affordability of veterinary care was a challenge for both owners and veterinarians in a focus group study by Coe, Adams, and Bonnett [19]. There was an expectation by pet owners who could and who could not afford expensive veterinary services that veterinarians should offer some type of payment plan to alleviate the upfront cost. From the veterinarian’s point-of-view, working around the client’s budget restrictions is tricky, as they may not be able to offer all the care the pet needs [19]. In another study by Kipperman, Kass, and Rishniw, economic limitations from clients prevented veterinarians from providing the best care for their client’s pets, resulting in euthanizing pets that could otherwise be saved [21]. Not only did economic limitations prevent veterinarians from providing the best care for pets, but veterinarians cited euthanasia as a reason for a large level of burnout within themselves. In addition, only about a quarter of veterinarians surveyed discussed pet health insurance as an available option for cost of care before the pets became sick, noting that not having enough time to talk to their clients about pet health insurance was a reason clients were unaware. In addition, in this study, most respondents agreed that clients knowing about pet health insurance would improve patient care, and in addition, reduce burnout (by improving the satisfaction level of veterinarians) [21].

From this research we saw that pet health insurance increased the amount spent at the visit, although frequency of visits was not significantly impacted by having pet health insurance. Pet owners may be spending more at the veterinarian and getting more of the services they need in one visit, because pet health insurance has allowed them to purchase with ease of mind. The challenge of affordability is not going away. Having conversations with the pet owner on the many tools (insurance, wellness plans, etc.) to support veterinary care is key. Veterinarians have a substantial impact on an owner’s decisions with regard to their pet’s care. Forty-nine percent of dog or cat owners would be likely or extremely likely to purchase insurance if veterinarians recommended pet health insurance as a method of payment, and owners would be most willing to purchase a pet health insurance policy directly from their veterinarian, with 40% of respondents indicating that this would be their preferred provider [22]. Communicating the importance of preventive and wellness care to pet owners is critical to closing the care gap. Educating clients on alternative methods of payment can increase the level of care pet patients receive, improving their overall health, quality of life, and life expectancy.
This research is the steppingstone for future work on pet health insurance. Future work should include analyzing to what extent pet health insurance impacts consumer behavior, the importance of plan attributes in a pet health insurance plan (the positive or negative impact that different deductibles, reimbursement rates, and conditions have within a plan), and what role a wellness plan has within a pet health insurance policy and its impact on visits, expenditures, and overall pet health. Additional work could include focusing on a veterinarians’ willingness to provide or promote a bundled wellness/insurance product, and their concerns surrounding the products in terms of issues that may prevent them from offering it, and/or costs involved for them.

This research was funded by the American Veterinary Medical Association. 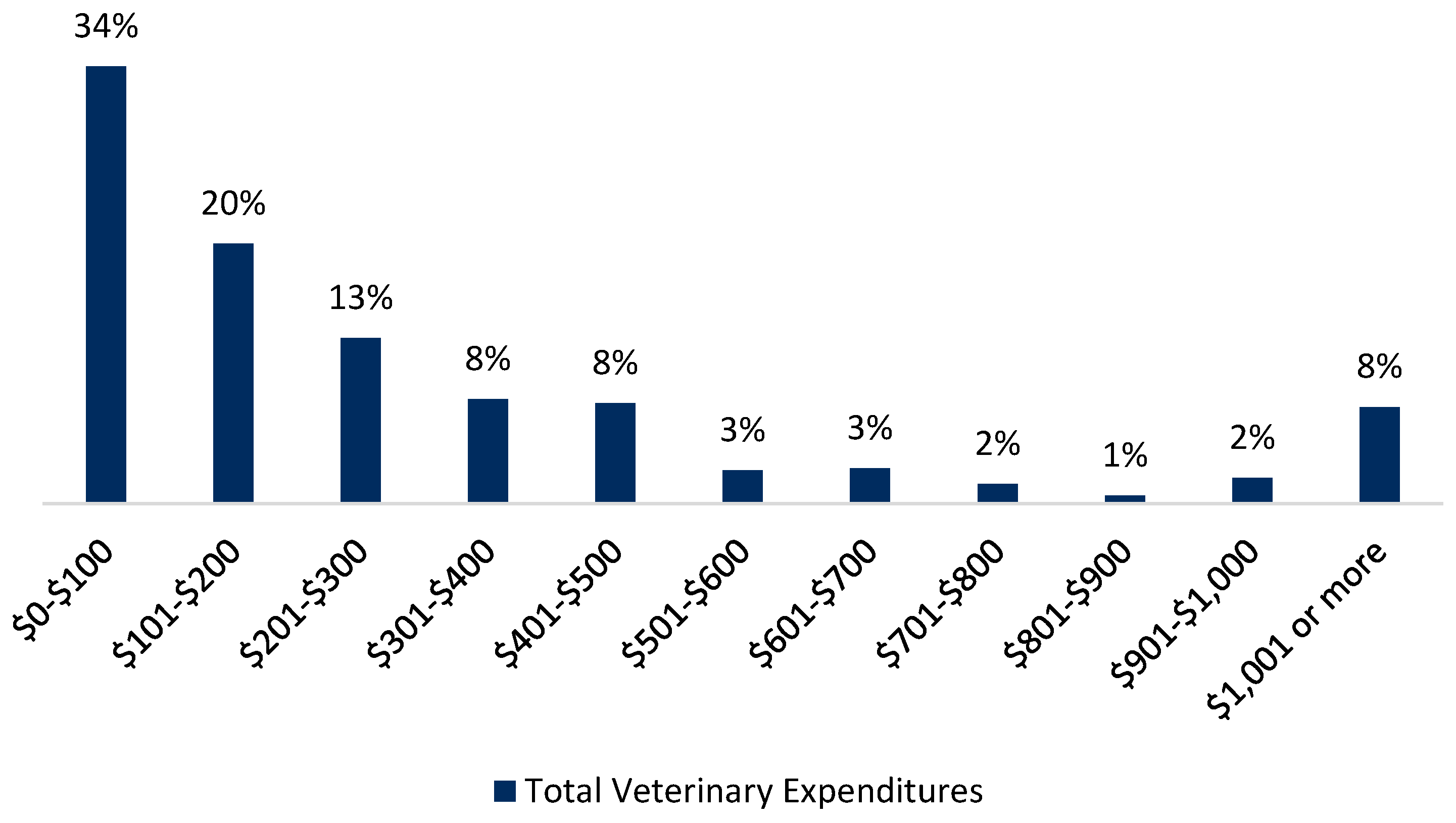 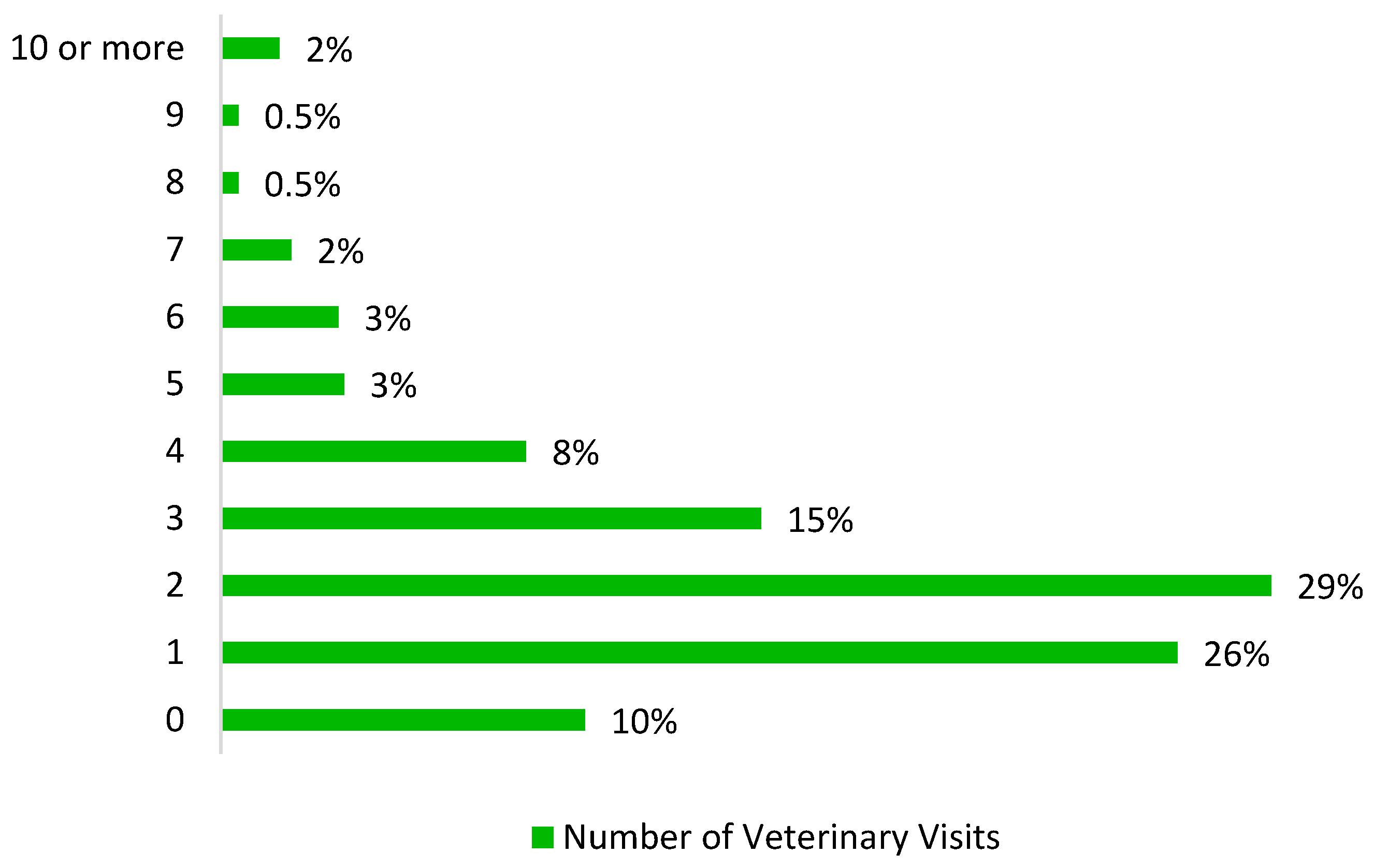