GIBBSTHUR: Software for Estimating Variance Components and Predicting Breeding Values for Ranking Traits Based on a Thurstonian Model
Previous Article in Special Issue

Horses and donkeys are often lumped together but as separate species; they differ from each other in many ways. We examined the head characteristics of deceased horses and donkeys and measured various structures of both the skull and the brain. We calculated various ratios of skull measurements from horses and donkeys to be able to compare them to each other. We noted that donkey skulls have a larger forehead than horses. The olfactory bulb was smaller in donkeys and was rotated more forward than in horses. Most strikingly, we noted that the hair whorl on the forehead of horses almost always corresponded with the location of the olfactory bulbs, but in donkeys, the hair whorl was located much further down the nose. While it is unclear why these differences exist, it may relate to some of the striking differences in behaviour and physiology that have also been noted between donkeys and horses.

Horses and donkeys belong to the genus Equus, but important differences exist between the species, many of which affect their management and welfare. This study compared skull morphology between horses and donkeys. Horse (n = 14) and donkey (n = 16) heads were obtained post-mortem, sectioned sagittally close to the midline, and photographed for subsequent measurement of various skull structures. Skull, cranial, nasal, and profile indices were calculated for topographical comparisons between the species. The olfactory bulb area (OBA), OB pitch (the angle between the hard palate and the OB axis), and whorl location (WL) were also measured. A General Linear Model determined the main effect of species with Sidak’s multiple comparisons of species’ differences among the various measurements. There was no species difference in cranial or nasal indices (p > 0.13), but donkeys had a larger cranial profile than horses (p < 0.04). Donkeys had a smaller OBA (p < 0.05) and a steeper OB pitch (p < 0.02) than horses. The WL corresponded to the level of the OB in horses but was extremely rostral in donkeys (p < 0.0001). These results show clear differentiation in skull morphology between horses and donkeys. This may be useful in validating other physiological and behavioural differences between horses and donkeys.
Keywords: olfactory bulb; skull morphology; breed differences; hair whorl olfactory bulb; skull morphology; breed differences; hair whorl

Since equids were domesticated, over 5000 years ago, humans have given them diverse roles ranging from work and transportation to sport and leisure. The selection of breeding animals has focused on specific traits such as colour, conformation, behaviour, and personality. Over time, such selection pressures have given rise to a wide variety of breeds with highly diverse physical characteristics from bulky draft horses to fine-boned Arabians, to miniature horses, to donkeys and mules.
Equine intraspecific diversity is evident in size, shape, colouration, conformation and, behavioural suitability for a particular purpose. Manifestations of selection pressures in various breeds have been documented in reports that focus on colour [1], genetics [2], anatomy [3], physiology [4], reproduction [5], trainability [6], personality [7], and behaviour [8]. Even within a breed, conformational differences are evident depending on the geographical region of origin [9,10].
Breed types can be broadly categorised according to their typical conformational characteristics based on genetic heritage. Cold-blooded horses refer to those from draft lineage, generally exhibiting a so-called coarse head, short neck, broad chest, and muscular body [9,11] compared to hot-blooded horses who descend mainly from Thoroughbred and Arabian lines. Thoroughbreds demonstrate longer withers, and Arabians have more sloping shoulders than draft horses [12]. Hot-blooded horses (e.g., Arabians) have a more concave head profile, while warm- to cold-blooded horses (e.g., Standardbreds) have relatively more convex profiles and longer skulls [13]. Warmbloods, originating from agricultural stock, changed their breeding goals over time to a lighter sport horse type, presenting a conformational mix between hot- and cold-bloods [14].
Breed types also show specific variations in behaviour and temperament. The Standardbred, as an example of a cold-blooded-type horse, is less reactive and quicker to habituate to aversive stimuli than more refined breeds, such as Thoroughbreds [7]. Cold-blooded horses are easier to handle [15] while Thoroughbreds are said to be more nervous [16], and take longer to learn a training task than other breeds [17]. Breeders of the Austrian Noriker draft horse have a firm belief in the effect of coat colour on temperament [9], for example, black Norikers are considered more lively.
Horses and donkeys belong to the same family of Equidae. However, within the genus Equus, there are clear variances in anatomical structure and behaviour of the various species. While donkeys and Standardbred racehorses both typically exhibit convex nasal profiles, the physiology and behaviour of these two equids is markedly different. Donkeys, evolving from arid climates, are more affected by intemperate weather than horses, but are less reactive to biting insects [18]. Donkeys can thrive on lower quality forage than horses, but this also puts them at risk for metabolic diseases when donkey owners feed them like horses [19,20,21]. While horses show more obvious behavioural responses to pain than donkeys [22,23], both donkeys and mules show more metabolic changes indicative of stress than horses when subjected to transportation and mixing at auction houses [24].
It has been suggested that behavioural differences among dog breeds may be predicted by skull size and shape [25,26,27]. Thus, phenotypic and behavioural dissimilarities among different horse breeds may also be reflected through skull morphology. The objective of this preliminary research is to determine differences in skull morphology between the Standardbred (as a cold-blooded representative) and donkeys, as a starting point for further investigation into the brain organisation that may underlie behavioural differences.

No approval for the use of animals in research was obtained as the research dealt only with material from deceased subjects. All horses and donkeys used in this research were euthanized for reasons unrelated to the research project. Heads of mature Standardbred-type horses (n = 14) and mature donkeys (n = 16) were obtained post-mortem. Donkeys ranged in size from standard to so-called mammoth. Ages of the horses were estimated from an assessment of their dentition while ages of the donkeys were known. The estimated age of the horses ranged from 3–16 years (mean 7.5 ± 4.5 years). The age of the donkeys ranged from 3–38 years (mean 21 ± 10 years). The skulls were separated from the body by cutting through the proximal end of the first cervical vertebrae using a band-saw. Each skull was sectioned sagittally as close to the midline as possible, and each section was weighed. No other preparation was performed on the skulls. Coloured pins were inserted to mark topographical landmarks (occipital crest, olfactory bulb, orbital notch, incisive bone), and a ruler was placed along the hard palate to reference a horizontal dimension and provide a known length for measurement calibration. Photographs of the sectioned skulls were taken (Canon Powershot SD940 IS 12.1MP; Ottawa, ON, Canada) for retrospective measurement of various structures using the open-source software Image J (v1.46r; Madison, WI, USA).

3.3. Comparison of Measurements between Donkeys and Horses

This pilot study compared the skull morphology of horses and donkeys, revealing that donkeys have a more distinct forehead, and yet have smaller olfactory bulbs rotated more rostrally compared to horses. Further, the facial whorl in donkeys is not associated with the location of the olfactory bulbs as it is in horses. These results may be linked to other documented differences between horses and donkeys, particularly behavioural differences. Future research exploring possible links between skull morphology and behaviour may result in better prediction of behaviours based on more than merely breed or species. Thus, horses and donkeys of a given morphotype could be better matched to a job or discipline suitable to their temperament, improving their welfare, increasing the safety of humans working with them, and reducing behavioural wastage due to miscommunication with humans.

The authors extend gratitude to the Anatomy staff at the Sydney School of Veterinary Science for assistance in procuring the horse skulls. Anna Harrison, a former welfare veterinarian at The Donkey Sanctuary, is warmly thanked for facilitating our work with donkeys. 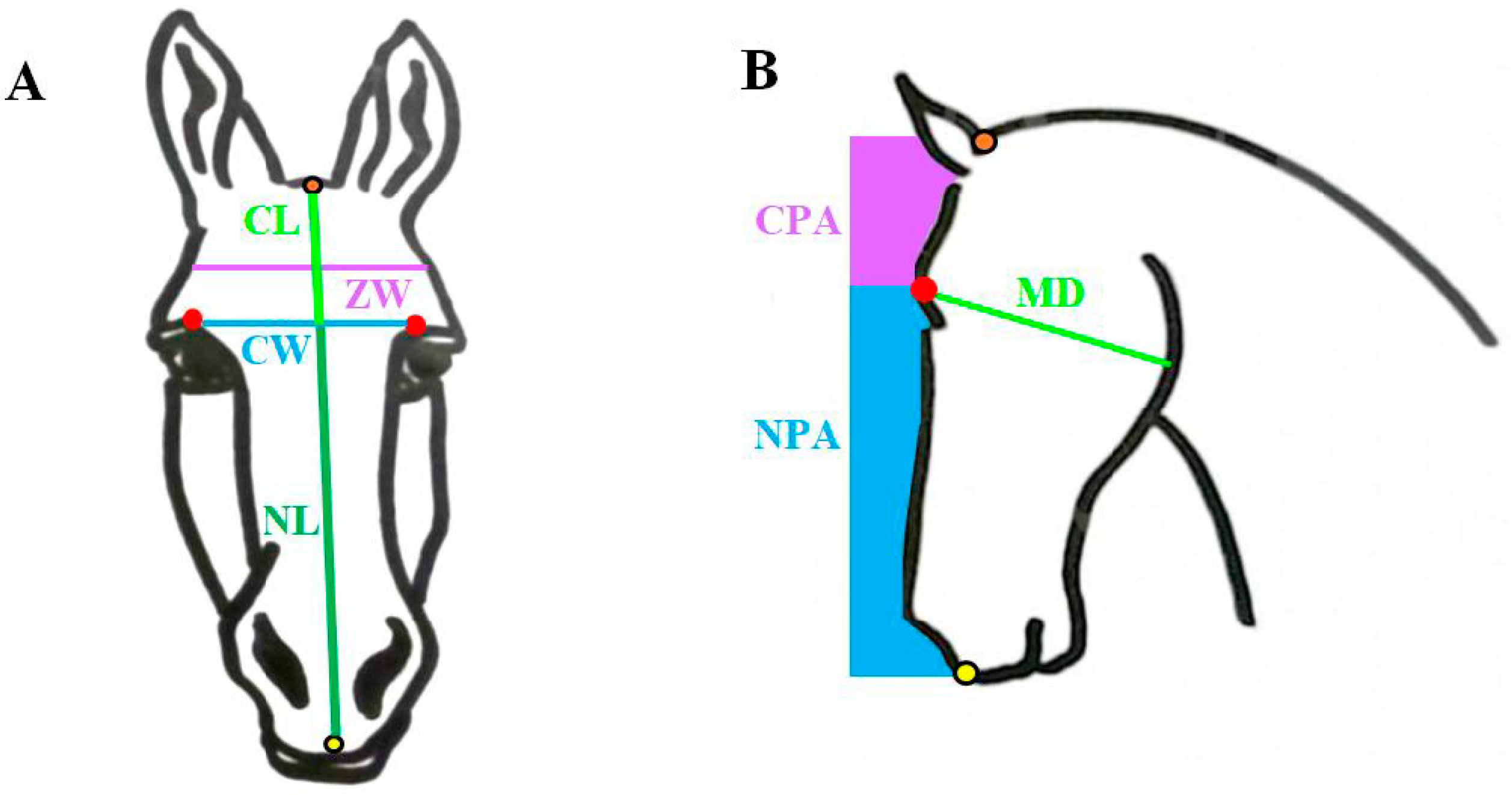 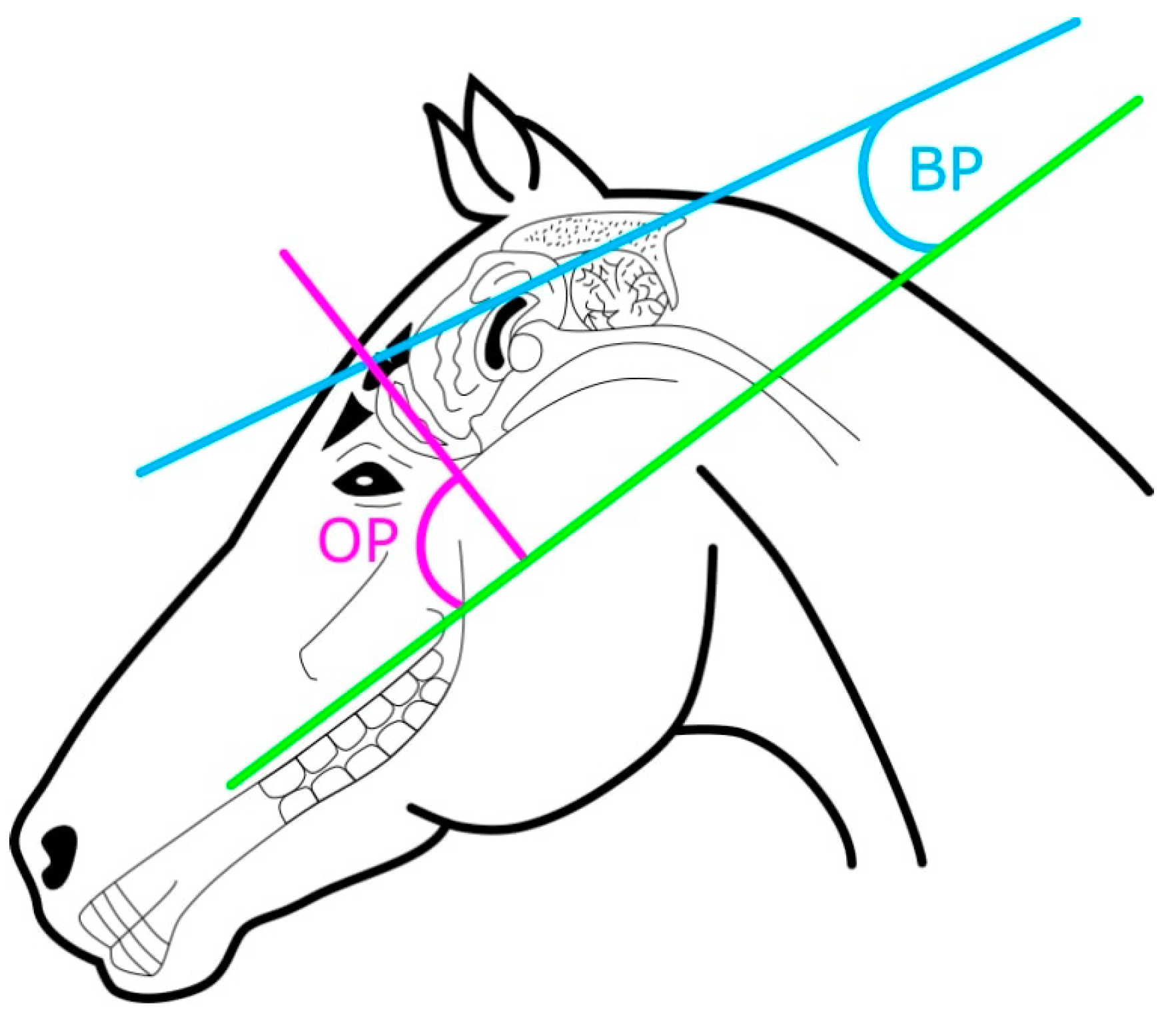