GIBBSTHUR: Software for Estimating Variance Components and Predicting Breeding Values for Ranking Traits Based on a Thurstonian Model
Previous Article in Special Issue

Horses and donkeys are often lumped together but as separate species; they differ from each other in many ways. We examined the head characteristics of deceased horses and donkeys and measured various structures of both the skull and the brain. We calculated various ratios of skull measurements from horses and donkeys to be able to compare them to each other. We noted that donkey skulls have a larger forehead than horses. The olfactory bulb was smaller in donkeys and was rotated more forward than in horses. Most strikingly, we noted that the hair whorl on the forehead of horses almost always corresponded with the location of the olfactory bulbs, but in donkeys, the hair whorl was located much further down the nose. While it is unclear why these differences exist, it may relate to some of the striking differences in behaviour and physiology that have also been noted between donkeys and horses.

Horses and donkeys belong to the genus Equus, but important differences exist between the species, many of which affect their management and welfare. This study compared skull morphology between horses and donkeys. Horse (n = 14) and donkey (n = 16) heads were obtained post-mortem, sectioned sagittally close to the midline, and photographed for subsequent measurement of various skull structures. Skull, cranial, nasal, and profile indices were calculated for topographical comparisons between the species. The olfactory bulb area (OBA), OB pitch (the angle between the hard palate and the OB axis), and whorl location (WL) were also measured. A General Linear Model determined the main effect of species with Sidak’s multiple comparisons of species’ differences among the various measurements. There was no species difference in cranial or nasal indices (p > 0.13), but donkeys had a larger cranial profile than horses (p < 0.04). Donkeys had a smaller OBA (p < 0.05) and a steeper OB pitch (p < 0.02) than horses. The WL corresponded to the level of the OB in horses but was extremely rostral in donkeys (p < 0.0001). These results show clear differentiation in skull morphology between horses and donkeys. This may be useful in validating other physiological and behavioural differences between horses and donkeys. View Full-Text
Keywords: olfactory bulb; skull morphology; breed differences; hair whorl olfactory bulb; skull morphology; breed differences; hair whorl
►▼ Show Figures 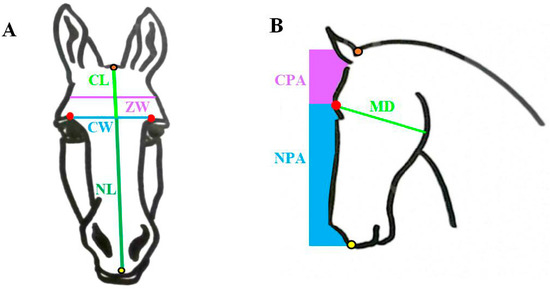