Influence of Housing Systems on Physical, Emotional, and Cognitive Functions with Aging in DBA/2CrSlc Mice

Free ranging domestic cats are common in urban and suburban habitats and may cause a threat of disease transmission to other pets, wildlife and humans. We investigated the occurrence of endoparasites in cats in Kraków city, Southern Poland, based on examination of road-killed individuals. More than half of the cats were infected with at least one of seven identified parasites. Cats from suburban areas were more likely to be infected than cats from the city core. Our study supports the results from other studies, showing that cats may serve as a significant source of zoonotic transmission.

Growing urbanization leads to an increased risk of parasite spread in densely inhabited areas. Free-ranging cats can be locally numerous and come into frequent contact with both wildlife and humans. Cats are thus expected to contribute to parasitic disease transmission. In our study, we investigated the prevalence of endoparasites in free ranging cats in urban areas of Kraków city, based on necropsy of road-killed cats in relation to sex and diet of cat, season and habitat type. We found that 62% of 81 cats were infected with endoparasites with Toxocara cati being the most prevalent. In total, we identified seven parasite species. The number of parasite species was higher in suburban habitats and aside from Eucoleus aerophilus the prevalence of all parasites was higher in cats from suburban areas than in the individuals living in the city urban core. The prey of examined cats included mostly rodents, followed by soricomorphs and birds, which can all serve as paratenic hosts. Based on our results, we suggest that cats in urban areas should be considered as a serious potential zoonotic threat. Implementation of proper veterinary control and wider education on the topic is recommended. View Full-Text
Keywords: domestic cat; Felis catus; disease transmission; Toxocara cati; endoparasites; urban ecosystems; PCA; prevalence domestic cat; Felis catus; disease transmission; Toxocara cati; endoparasites; urban ecosystems; PCA; prevalence
►▼ Show Figures 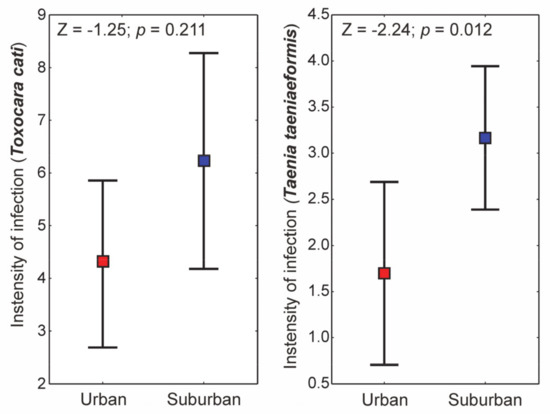