The Effect of Shelter on Oxidative Stress and Aggressive Behavior in Crested Newt Larvae (Triturus spp.)

Greater Flamingos are commonly kept under flight restraint in zoos. Some are pinioned, others only feather clipped and some remain physically intact but live in aviaries that are often not large enough to fly. In this study, we compared these three groups by measuring corticosterone (a hormone associated with stress) in their feathers in order to find out which of the restraining methods is most compatible with animal welfare. Additionally, we carried out behavioral observations on all groups to detect potential stressors other than the status of flight itself. We expected to find differences in CORTf between deflighted and airworthy flamingos. However, no significant differences in feather corticosterone were measured between the three groups and the hypothesis was rejected. The most important factor for the level of corticosterone was found to be the zoological institution itself, reflecting the housing conditions. We hypothesize that the method by which a Greater Flamingo is hindered from flying does not have measurable effect on the corticosterone concentration in its feathers. Although these findings suggest that all methods are equally impacting animal welfare, we highlight the need for further improved studies based on this model.

Deflighting zoo birds is a practice that receives increasing criticism due to its presumed incompatibility with animal welfare. To our knowledge, this is the first approach to address this problem in a scientific way. To do this, we compared feather corticosterone (CORTf) from Greater Flamingos (Phoenicopterus roseus, n = 151) of different flight status (i.e., pinioned, feather clipped, airworthy) from twelve different zoological institutions. To complement the hormone measurements, behavioral observations (scan samplings) were conducted prior to feather sampling within the presumed time frame of feather growth. We hypothesized that CORTf of the deflighted flamingos would differ from CORTf of their airworthy conspecifics. No significant difference in CORTf was found between the three groups, and our hypothesis was rejected. However, the impact of the institution itself (i.e., the housing conditions) proved to be the most dominant variable (variance between the institutions = 53.82%). Due to high variability, the behavioral observations were evaluated descriptively but did not give rise to doubt the findings in CORTf. Therefore, we assume that the method of flight restraint of Greater Flamingos does not have a measurable effect on CORTf. We consider this model for evaluating animal welfare of zoo birds a useful tool and provide ideas for further adjustments for consecutive studies. View Full-Text
Keywords: feather corticosterone; animal welfare; Greater Flamingo; deflighting; pinioning; bird feather corticosterone; animal welfare; Greater Flamingo; deflighting; pinioning; bird
►▼ Show Figures 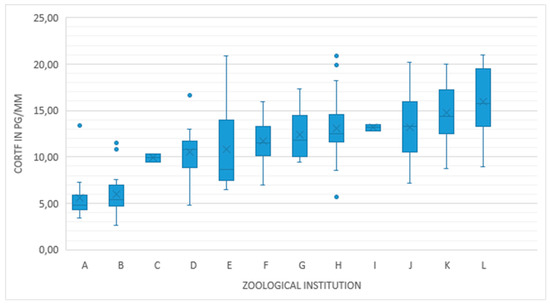