Udder Measurements and Their Relationship with Milk Yield in Pelibuey Ewes

The objective of the present study was to evaluate the effect of the grade of crossbreeding (Lacaune x Manchega) and environmental factors on milk production in a commercial flock in Spain. A total of 5769 milk production records of sheep with different degrees of purity of the Lacaune breed crossed with Manchega were used as follows: 100% Lacaune (n = 2960), 7/8 Lacaune (n = 502), 13/16 Lacaune (n = 306), 3/4 (n = 1288), 5/8 Lacaune (n = 441) and 1/2 Lacaune: Manchega (n = 272). Additional available information included the number of parity (1 to 8), litter size (single or multiple), and the season of the year of lambing (spring, summer, autumn and winter). A mixed model was used to evaluate the level of crossbreeding and environmental factors on milk production. The 100% Lacaune sheep presented the highest milk production with respect to the F1 Lacaune x Manchega sheep (p < 0.01), showing that as the degree of gene absorption increases with the Manchega breed, it presents lower milk yield. The 100%, 13/16, and 3/4 Lacaune genotypes had the highest milk yields with respect to the 1/2 Lacaune/Manchega breed (p < 0.001). The Lacaune registered on average 181.1 L in a period adjusted to 160 days of lactation (1.13 L/ day). Likewise, the parity number, litter size, and season of lambing effects showed significant differences (p < 0.01). It was concluded that 13/16 and 3/4 Lacaune/Manchega ewes presented the highest milk yields with respect to the other crosses. View Full-Text
Keywords: Lacaune; Manchega; milk yield; heterosis Lacaune; Manchega; milk yield; heterosis
►▼ Show Figures 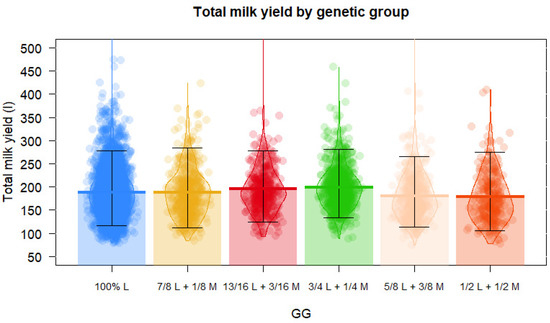