Glutamine Metabolism and Its Role in Immunity, a Comprehensive Review
Previous Article in Journal

Genetic Characterization of Piroplasms in Donkeys and Horses from Nigeria

Ration formulation is a mixture of individual feed ingredients, and the metabolizable energy (ME) and net energy (NE) of the ration are assumed to be the sum of the individual ingredients. This assumes that the ME and NE values of the individual ingredients do not change when mixed with other feed products. However, some studies have documented associative effects among feed ingredients [1,2,3], defined as interactions between the ration components that alter the nutritional value of the individual ingredients [4]. Associative effects may be positive, negative, or absent [5], and though widely discussed in theory, they are seldom considered in feed formulation.
Ruminant animals are fed diets of highly fibrous roughage, grains, brans, and hulls. Associative effects may be an important factor in ruminant rations, as interactions among these ingredients could modify the microbial fermentation processes in the rumen [6,7]. Several studies have investigated the associative effects of barley straw and alfalfa (Medicago sativa) [8], grasses and legumes [9], red clover (Trifolium pratense) and kikuyu grass silage [10], and corn stalks and alfalfa (Medicago sativa) [11].
Rice is a major crop in Asia and, consequently, rice straw is a common roughage for ruminant animals in most Asian countries. In 2014, approximately 538.88 million tons of rice straw, accounting for more than 90% of total world production, was produced in Asia [12]. Prior studies have investigated the associative effects of rice straw with alfalfa hay and corn silage [13], and those of chemically treated rice straw with grass hay or mulberry leaves [6]. To date, however, no studies have tested the associative effects of rice straw with timothy hay and corn grain, which are commonly co-fed ruminants such as beef cattle. In particular, timothy hay is well known for its good quality and contributes a major proportion of imported forage in Korea [14]. Compared to rice straw, timothy hay contains easily digestible carbohydrates, so that it has higher digestibility of fiber and dry matter [15]. Timothy hay, however, is two to three times more expensive than rice straw, and thus it is mainly used as a forage source for calves and lactating dairy cows and as a supplement for rice straw for growing cattle in Korea [16].
In vitro fermentation methods are widely used to study associative effects, as the digestibility and rumen fermentation of feed can be measured in a relatively simple manner, and numerous samples can be evaluated at one time [17]. Among different in vitro methods, the in vitro gas production technique is commonly used to assess the differences between single and mixed feed substrates for different variables [6,7,13,18,19]. An automated in vitro gas production system (AGPS) was first developed by Pell and Schofield [20]—the AGPS continuously measures the gas produced during in vitro ruminal fermentation with electronic pressure transducers, which are sensitive enough to detect small changes due to associative effects. The AGPS developed by Pell and Schofield is inexpensive, easily adopted, and simple to maintain.
The objective of this study was to evaluate the associative effects of rice straw, timothy hay, and corn grain on the ruminal fermentation characteristics using an automated in vitro gas production system.

For this study, we developed and used a computerized in vitro gas production system, similar to Pell and Schofield [20]. The system consisted of an incubator (DS-110S, Daewon science, Bucheon-si, Korea), two 10 multi-plate stirrers (MS-52M, Jeio-Tech, Seoul, Korea), pressure sensors attached to the incubation bottles (four arrays of five 125 mL serum bottles, for a total 20 bottles), and a 20-channel data logger. The dimensions of the incubator were 600 × 580 × 650 (W × D × H, unit: mm), the internal temperature was maintained at 39 °C, and a pressure sensor (WIKA A-10; Wika, Lawrenceville, GA, USA) measured pressure increases up to 15 psi (pound-force per square inch; i.e., 1 standard atmosphere, atm). The data logger converted the analog signals from the pressure sensors into digital signals and stored them, and the data were transferred to a computer (via a USB drive) for processing using Microsoft Excel Macros.
In the in vitro fermentation study, the gas produced during anaerobic fermentation accumulated in the bottles. A leakage test and sensor calibration were performed prior to each run of the system, and the contents of the fermentation bottles were stirred continuously with a magnetic bar (90 rpm). The internal pressure of the bottles was measured by pressure sensors, and the data logger automatically recorded the values every 20 min.

Two cannulated, non-lactating Holstein cows were used as donor animals. Both were fed the same diet ad libitum twice daily (08:00 and 18:00): 600 g/kg corn silage (232 g/kg DM on as-fed basis; 121 g/kg CP, 527g/kg neutral detergent fiber (NDF) analyzed with a heat-stable amylase and expressed inclusive of residual ash (aNDF), 338 g/kg ADF, 27 g/kg EE, and 78 g/kg ash on DM basis) and 400 g/kg commercial concentrate (878 g/kg DM on as-fed basis; 171 g/kg CP, 339 g/kg aNDF, 192 g/kg ADF, 35 g/kg EE, and 59 g/kg ash on DM basis). The rumen fluid from the two donors was mixed and transferred to a Duran bottle on ice, measured for pH with a general pH meter (EcoMet P25, Istek, Inc., Seoul, Korea), and transported to the laboratory. The rumen contents were strained through eight layers of cheesecloth and glass wool and then combined with four times the volume of the in vitro solution described by Goering and Van Soest [21] under strictly anaerobic conditions. Twenty milliliters of the rumen fluid and buffer mixture was transferred to 125 mL serum bottles (Wheaton, Millville, NJ, USA) containing 0.2 g of the feed samples under continuous O2-free CO2 flow to maintain anaerobic conditions. The 125 mL serum bottles were sealed with septum stoppers and aluminum caps and connected to a three-way stopcock and 20 G needle set. The serum bottles were then connected to the sensor and incubated for 48 h at 39 °C. The contents of the fermentation bottles were stirred continuously with a magnetic bar at 90 rpm. In each fermentation batch, the incubation samples were performed in triplicate, and two blanks contained the buffered rumen fluid without the feed substrate.

After 48 h of incubation, the pH was measured and then volatile fatty acid (VFA) analysis was performed following the protocol proposed by Erwin et al. [22], using a gas chromatograph (HP 6890, Hewlett-Packard CO., Palo Alto, CA, USA) equipped with a flame ionization detector and capillary column (Nukol fused silica capillary column 30 m × 0.25 mm × 0.25 μm, Supelco, Inc., Bellefonte, PA, USA). The temperatures of the oven, injector, and detector were 90–180, 185, and 210 °C, respectively. Nitrogen was used as the carrier gas at a flow rate of 40 mL/min. NH3-N was analyzed as in Chaney and Marbach [23], where the NH3-N concentration was determined by measuring the absorbance at 630 nm with a spectrophotometer (UV-1800, Shimadzu Inc., Kyoto, Japan). The remaining undigested samples and fluid were used to measure aNDF to determine the NDF digestibility and true dry matter digestibility (TDMD) using a modified version of the methods proposed by Goering and Van Soest [21].

3.1. Rumen Fermentation Characteristics and the Kinetics of Gas Production

L.S. conducted the experiment and prepared the original draft, M.L. performed the statistical analyses and system development, S.J. reviewed the draft, S.S. designed the experiment, and reviewed and edited the draft. All authors have read and agreed to the published version of the manuscript.

This research was supported by the “Cooperative Research Program for Agriculture Science and Technology Development (Project No. PJ01422003)”, Rural Development Administration, Republic of Korea. 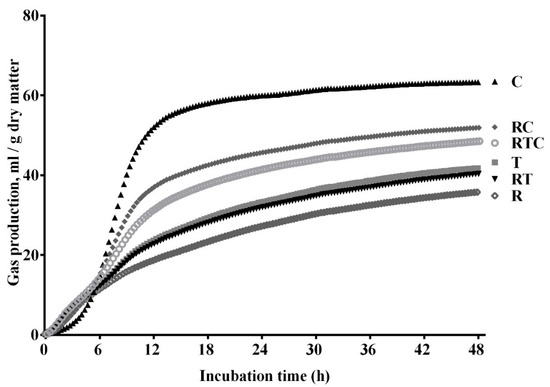 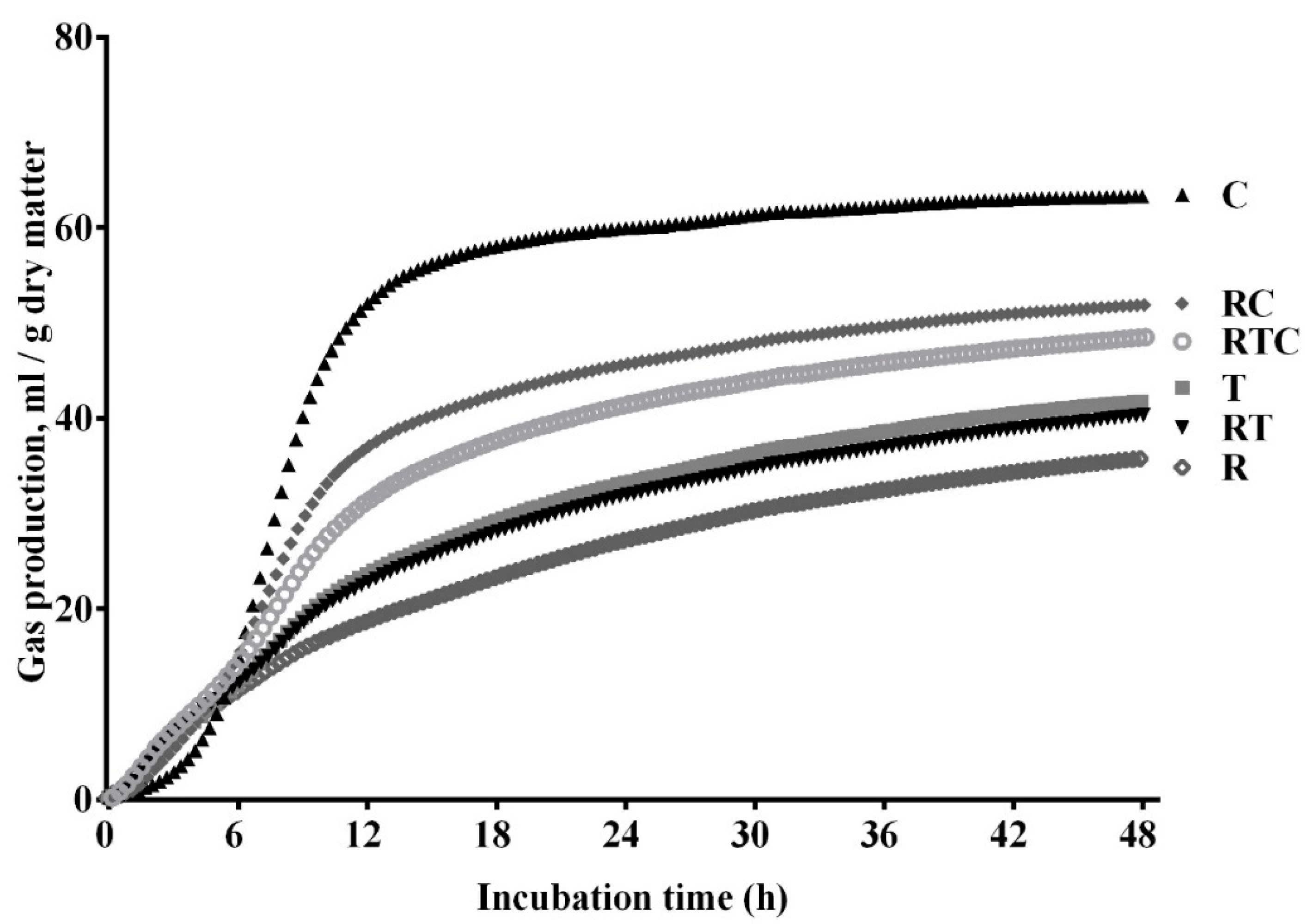