Extension and Advisory Organizations on the Road to the Digitalization of Animal Farming: An Organizational Learning Perspective
Previous Article in Journal

Validation of an Alternative Feather Sampling Method to Measure Corticosterone

Research projects on birds’ welfare or their stress physiology are often complemented by measurements of corticosterone level in feathers. Until now, the common standard for this method is to collect the feathers by plucking, a procedure which on living birds is presumed to be painful and to cause stress. Therefore, in most European countries an animal experiment application is required. The aim of this study was to validate an alternative, possibly less stressful sampling method: cutting the feathers close to the skin. The examined species were geese and ducks from a conventional poultry husbandry. There was no relevant difference between the two methods assessed according to statistical analysis. In conclusion, it is reasonable to assume that feather cutting could be established as an alternative sampling method for measuring corticosterone. Nevertheless, we recommend further research on other species to confirm these results.

The most common feather sampling method for feather corticosterone measurement is by plucking the feathers from the bird’s skin. This procedure performed on living, restrained birds is qualified as an animal experiment according to German/European legislation, which has to be applied for from the competent authorities. The Directive 2010/63/EU requires the full implementation of the 3-R Principle of Russel and Burch in animal experiments, which means not only to replace the use of animals, but also to reduce the number of animals used and to refine procedures whenever possible. In response to this issue, the aim of this study was to validate an alternative, less invasive sampling method by cutting feathers close to the skin in comparison to the gold standard of plucking them. For this proof-of-principle study, a conventional poultry husbandry with trial groups of geese (Anser anser domesticus) and ducks (Anas sterilis) was selected. All birds were kept under the same living conditions to standardize the influencing factors regarding husbandry, and thus, their stress levels. Feather samples were collected between the shoulders from 46 geese and 51 ducks, both by cutting as well as by plucking, directly after slaughter for meat production. Feather corticosterone levels were measured with Enzyme-Linked Immunosorbent Assay (ELISA). Results were compared using Bland–Altman plots and concordance correlation coefficients (CCC). It could be seen that concordance between corticosterone levels in cut and plucked feathers was rather poor: 0.38 for Anser, and 0.57 for Anas. However, comparing the mean corticosterone values in pg/mm of each species with their respective standard deviations, the differences between the methods were negligible. As the results showed that the differences between the individuals were markedly greater than the differences between the methods, the determination of corticosterone levels in cut feathers is valid compared to using plucked feathers. The validation tests of ELISA showed only acceptable repeatability and reliability. Hence, the results should be verified in further studies. In conclusion, it is recommended for future research to use cut instead of plucked feathers for corticosterone measurement. View Full-Text
Keywords: feather corticosterone; comparative study; plucked feathers; cut feathers; Domestic Goose; Mulard Duck; animal welfare feather corticosterone; comparative study; plucked feathers; cut feathers; Domestic Goose; Mulard Duck; animal welfare
►▼ Show Figures 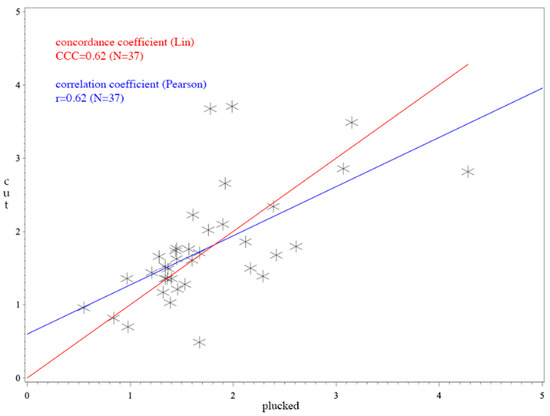