Evaluating Impacts of a One Health Approach to Companion Animal Health and Management in a Remote Aboriginal Community in the Northern Territory, Australia

The aim of this study was to investigate the importance of the relationships among hosts, microbiota, and diet composition in dry dairy cows. Therefore, the composition of the rumen microbiome in cows from three dairy farms was investigated to identify core bacteria contributing to various physiological roles during rumen fermentation in dry dairy cows. Our results revealed that the ruminal fluid in dry dairy cows from different regional farms had core rumen microbiota that could be clearly distinguished from that of cows of the other farms.

All experimental procedures were conducted according to guidelines from the Institutional Animal Care and Use Committee of National Taiwan University (IACUC number: NTU105-EL-00022). The owners’ consent was verbally confirmed as part of routine veterinary operation.

All experimental procedures were conducted according to guidelines from the Institutional Animal Care and Use Committee of National Taiwan University (IACUC number: NTU105-EL-00022). In total, 15 Holstein cows in the second week of their dry periods from three farms were sampled in Taipei (experimental farm of the National Taiwan University, Farm A, N = 5), Changhua (private farm, Farm B, N = 5), and Tainan (Lin Fengying’s daily farm, Farm C, N = 5). The animals were fed with a mixed forage–concentrate diet with different diet compositions among the farms (Farm A: 10.71% crude protein (CP) and 60.90% crude fiber (CF); Farm B: 9.92% CP and 66.79% CF; Farm C: 13.20% CP and 43.08% CF). The forage-to-concentrate ratios (F:C) in diet dry matter (DM) basis of Farms A, B and C were 85.7:14:3, 88.8:11.2, and 67.5:32.5, respectively (Table 1). Average milk production during the previous lactating period for the cows of Farms A, B, and C were 24.1 ± 8.3, 22.5 ± 7.6, and 20.1 ± 8.5 kg, respectively. The cows’ entire mid-rumen fluid contents (approximately 200 mL) were collected using a stainless-steel stomach tube by a veterinarian, and their entire rumen fluid volume was filtered with gauze to remove solids. After this study, all experimental animals were released and then maintained by the original farms.

Rumen samples were immediately frozen in a −80 °C freezer and then freeze-dried. DNA was extracted from 100 mg of homogenized rumen sample through bead beating followed by phenol–chloroform extraction [5]. The resulting solution was precipitated with ice-cold isopropanol (Sigma-Aldrich, St. Louis, MO, USA) to obtain the DNA pellet. The pellet was washed with 70% ethanol twice and suspended in 200 μL of ddH2O. The DNA was quantified using a Nanodrop 2000 spectrophotometer (Thermo Scientific, Waltham, MA, USA) and stored in a −20 °C freezer until analyzed. For next-generation sequencing (NGS), the 16S ribosomal RNA (rRNA) gene regions were amplified for further analysis. The primer set used in this study was 16S, 515F, and 806R for amplification of the V4 16S rRNA gene region. The PCR reaction was conducted in a PCR machine (Biometra T3000 thermocycler, Analytik Jena, Göttingen, Germany); the PCR conditions are shown in Supplementary Materials Table S1.

Amplicon sequencing was performed using the paired-end Illumina HiSeq platform to generate 250 bp paired-end raw reads, and the entire set of paired-end reads was assembled using FLASH v.1.2.7 [15]. Demultiplexing was conducted from barcode identification. For quality control, low-quality reads (Q < 20) were discarded in the QIIME 1.9.1 pipeline [16]. If three consecutive bases were Q < 20, the read was truncated and retained in the dataset only if it was at least 75% of the original length; this was done using the split_libraries_fastq.py script in QIIME [17]. Sequences were chimera-checked using UCHIME to obtain effective tags and were filtered from the dataset before operational taxonomic unit (OTU) clustering at 97% sequence identity using the UPARSE function in the USEARCH v.7 pipeline [18,19,20,21]. For each representative sequence, RDP Classifier v.2.2 [22] was employed to annotate taxonomy classification based on the information retrieved from the SILVA database v.132 [23,24]. This was performed with a minimum confidence (80%) threshold to record assignments. Sequences with one-time occurrence (singletons) or that were present in only one sample were filtered out. To analyze sequence similarities among OTUs, multiple sequence alignment was conducted with PyNAST v.1.2 [25] against the core-set dataset of the SILVA database. A phylogenetic tree was constructed with sequences representative of the OTUs using FastTree [26,27].
To normalize varying sequence depths across samples, OTU abundance information was rarefied to the minimum sequence depth using the QIIME script (single_rarefaction.py). Subsequent analysis of alpha and beta diversity was performed using normalized data. Alpha diversity indicated species complexity within individual samples from seven criteria outputs from the QIIME pipeline, including observed OTUs, Chao1, ACE (abundance-based coverage estimators), Shannon, Simpson, phylogenetic diversity whole tree, and Good’s coverage [28]. Observed OTUs signified the number of species represented in a microbial community. Community richness was assessed using Chao1 and ACE indices, and the relative abundance and evenness accounting for diversity were evaluated with Shannon and Simpson indices. A rarefaction curve was constructed from random selection of sequencing data from each sample to represent the number of observed species [29].
A distance matrix of unweighted UniFrac and Bray–Curtis dissimilarity among previously obtained samples was transformed into a new set of orthogonal axes, where the most influential variable was represented by the first principal coordinate and the second most influential variable by the second principal coordinate, and so on. An unweighted pair-group method with arithmetic mean hierarchical clustering was performed to interpret arithmetic distances with an average linkage algorithm. For statistical analysis, a Mann–Whitney U test was used to determine the significance of alpha diversity using R software. For beta diversity, principle components analysis (PCA) was performed to evaluate differences between sample groups. Spearman correlation analysis was applied to measure co-occurring correlation of the top 15 genera (the most abundant genera). Statistically significant biomarkers were identified through linear discriminant analysis (LDA) effect size (LEfSe), which is an approach based on an algorithm that performs nonparametric Kruskal–Wallis and Wilcoxon rank-sum tests to identify bacterial taxa with significantly different abundance between each group [30]. LEfSe applies LDA to bacterial taxa identified as significantly different and assesses the effect size of each differentially abundant taxon. In this study, taxa with LDA scores (log 10) > 4 were considered significantly different. For functional analysis, the functional abundance of 16S rRNA sequencing data was analyzed to predict functional genes with PICRUSt v.1.1.1 [31].

3.1. Proportion of Rumen Bacterial Communities in Dry Cows Was Diverse Across Regional Farms

First, we examined the rumen microbiota of the dry cows from the various farms using NGS. The results indicated that 24,390 valid sequences of bacterial 16S rRNA genes were obtained for analysis. As presented in Figure 1A, 1406 OTUs in all samples were shared among the farms, with 893, 386, and 137 unique OTUs for Farms A, B, and C, respectively. The observed OTUs of Farms A, B, and C numbered 1589.2 ± 193.9, 1512.2 ± 255.6, and 1373.3 ± 198.9, respectively, with no significant difference between the farms (Figure 1B). For α-diversity in each group, the Chao1 (richness) and Shannon indices (diversity) of Farms A, B, and C were not significantly different (Figure 1C,D).
Bacterial taxa were detected in the rumen of all tested cows, with 53 genera belonging to 15 phyla (Figure 2A). These phyla accounted for more than 95% of all bacterial sequences. Fourteen phyla, including Actinobacteria, Bacteroidetes, Cyanobacteria, Elusimicrobia, Euryarchaeota, Fibrobacteres, Firmicutes, Proteobacteria, Spirochaetes, SR1, Synergistetes, Tenericutes, TM7, and Verrucomicrobia, were distributed across all three groups (Farms A, B, and C). The top three dominant bacterial phyla were Firmicutes, Bacteroidetes, and Proteobacteria among the farms, but the proportions of bacterial phyla differed greatly (Figure 2A). Similar patterns were observed in class and family levels (Figure 2B,C). The top 10 dominant bacterial classes and families were the same across groups but with varying proportions. For the genus level, 281 taxa were identified. Prevotella occupied 49.9%, 10.8%, and 6.8% of total OTU relative abundance in Farms A, B, and C, respectively, and was the most dominant genus across farms (Figure 2D). Except for Prevotella, the abundance of other genera in Farm A was lower than 5%.

We performed PCA on the genus level to evaluate variations in rumen microbial composition among the farms. A PCA plot revealed that PC1 and PC2 accounted for 83.9% and 12.1% of rumen microbiota compositional variation, respectively, and differed among farms (Figure 3A). Vector analysis indicated that Prevotella was the major bacteria with higher contributions to PC1 variability. Methanobrevibacter, Pseudobutyrivibrio, Ruminococcus, and Streptococcus were major contributors to PC2 variability. Additional analysis with Bray–Curtis dissimilarity and UniFrac revealed results consistent with those of PCA. The regional farms had diverse microbial communities that could be clearly identified between farms (Figure 3B,C).

We identified bacterial taxa that were predominant as biomarkers among the groups through LEfSe. A total of 32 influential taxonomic clades (LDA score > 4) were recognized with six genera biomarkers (Figure S1A,B). The most affected bacterial genus was Prevotella in Farm A. In Farm B, the specific biomarker was Psudobutylvibrio. Four genera, namely Bacteroides, Methanobrevibacter, Ruminococcus, and Streptococcus, were identified as biomarkers in Farm C.

3.4. Diet Composition Affected the Network of Co-Occurring Predominant Bacteria at the Genus Level in Rumen

In conclusion, unlike other studies that have focused on the lactating period, the present work emphasized the necessity and importance of the relationships among the host, microbiota, and diet composition by analyzing the functions of rumen microbiota in dry dairy cows. The differences among microbial communities across farms were greater than those within farms, mainly because of diet composition. The abundance of certain genera, such as Prevotella and Ruminococcus, and SCFA-producing microorganisms in dry dairy cows may be related to milk yields from previous lactating periods. Functional analysis of the roles of bacterial communities within the rumen among the farms provided an understanding of the potential for diversified niches and vital functions in the rumen of dry dairy cows. Future studies on other microorganisms, including protozoa, fungi, and archaea, are needed for comprehensive understanding of their roles in dry dairy cows.

6.2. Availability of Data and Materials

The datasets used and/or analyzed in the current study are available from the corresponding author on reasonable request.

The following are available online at https://www.mdpi.com/2076-2615/10/10/1791/s1, Figure S1: Linear discriminant analysis (LDA) effect size of the OTUs with significant differences in abundance in rumen samples from regional farms. (A) Taxonomic cladogram of 16S rRNA sequences. (B) LDA scores of biomarkers in the rumen samples from different regions The OTUs with LDA scores (log 10) higher than 4 were considered biomarkers for each group. Relative abundance of (C) Bacteroidaceae, Coriobacteriaceae, Lachnospiraceae, Methanobacteriaceae, Paraprevotellaceae, Prevotellaceae, Ruminococcaceae, Streptococcaceae, and Veillonellaceae, Table S1: PCR conditions.

This study was financially supported by a grant (MOST 105-2313-B-002-041-MY3) from the Ministry of Science and Technology in Taiwan. The funder had no role in the experimental design, data collection and analysis, and manuscript preparation for this study.

The authors declare no known conflict of interest associated with this publication and no significant financial support that could have influenced the outcome of this work. 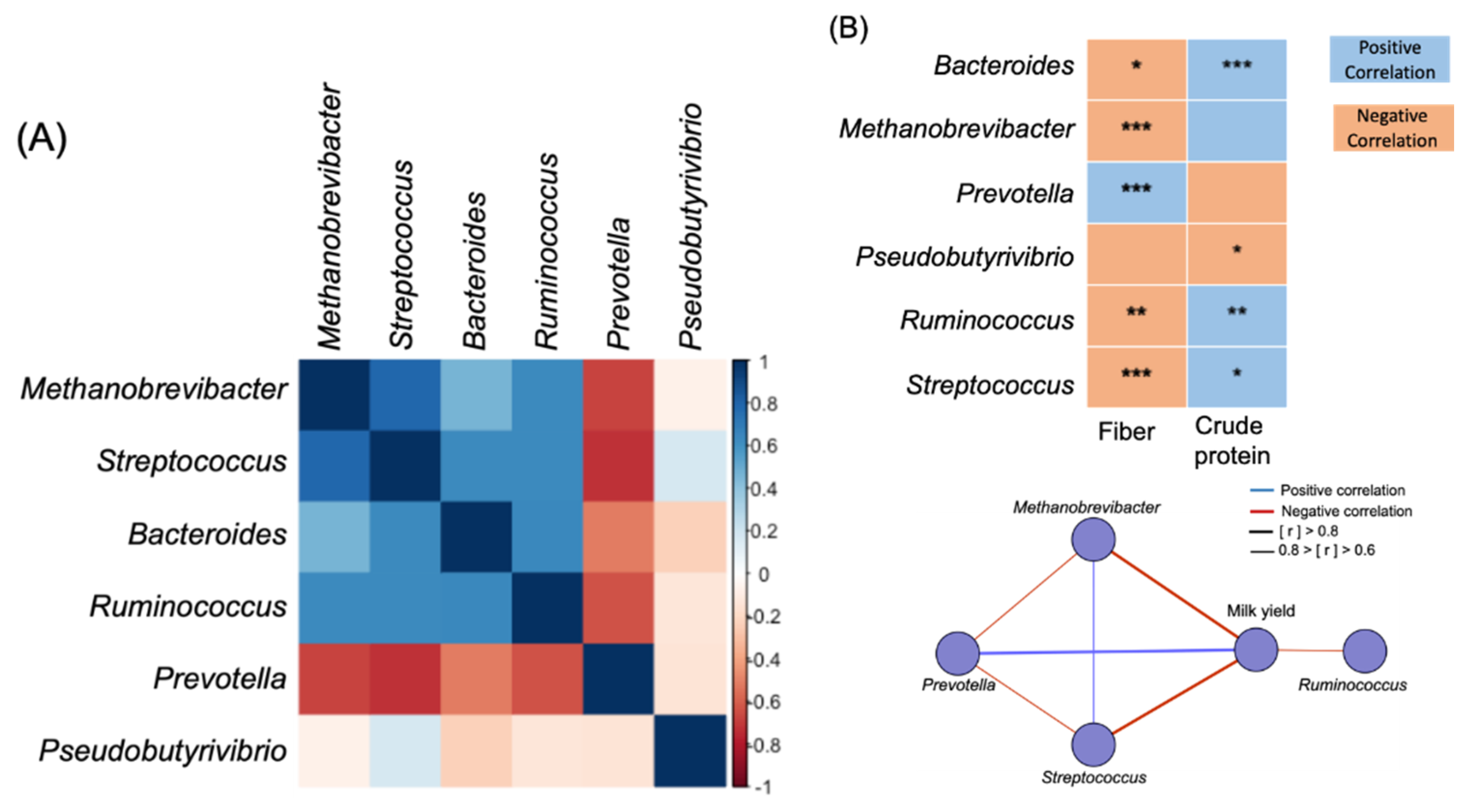