Tadpoles undergo many changes in physiology and immunology until metamorphosis into adult frogs. Major histocompatibility complex (MHC) molecules are an important part of vertebrate adaptive immunity, and our study measured the expression of two MHC genes (MHC class I and II) in skin during six tadpole stages of the Montane Brown frog (Rana ornativentris). First, using a qPCR method, we found that both MHC class I and II expression significantly increased between stage 24/25 (‘early’) and stage 28 (‘mid’) tadpole skin. Then, we conducted next-generation sequencing for ‘early’, ‘mid’ and ‘late’ stage tadpole skin mRNA of both R. ornativentris and a model species, Xenopus tropicalis, and confirmed that MHC expression increased from the ‘mid’ stage. We also performed further analyses of transcriptome data and found that several immune-related gene ontology terms were upregulated from the ‘mid’ tadpole stage. Our findings probably support that both MHC class I and II have a functional role during tadpole development. 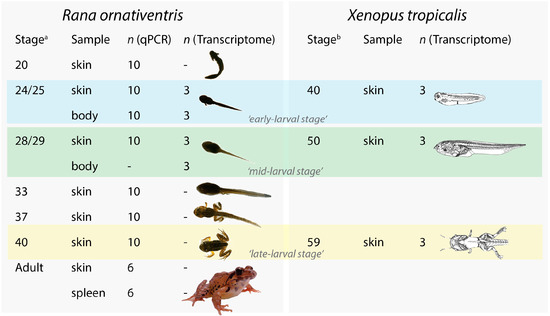