Ahmed A. Allam 5 and

The current study was performed to study the efficacy of live Salmonella Enteritidis (SE) vaccine alone and with simultaneous administration of probiotic or prebiotic on broiler chickens. The using of probiotic or prebiotic products administered via drinking water enhanced the growth performance of broiler chickens experimentally challenged with SE at the 28th day of age. The use of probiotic or prebiotic simultaneously with the live Salmonella vaccine can diminish the negative effect of live vaccines in terms of the growth performance, mortality rate, fecal shedding and organ re-isolation of SE. It is therefore a good strategy to relieve the negative effect of the harmful bacterium and improve the growth performance of broilers.

Salmonellosis is one of the most important bacterial diseases in poultry, causing heavy economic losses, increased mortality and reduced production. The aim of this study was the comparative efficacy of a commercial probiotic and/or prebiotic with a live attenuated Salmonella Enteritidis (SE) vaccine on the protection of broiler chickens from SE challenge. The efficacy of probiotic or prebiotic products, as well as a live Salmonella Enteritidis (SE) vaccine at the 7th day of age, administered via drinking water, were evaluated for clinical protection and effects on growth performance of broiler chickens experimentally challenged with SE at the 28th day of age. The use of probiotic or prebiotic simultaneously with the live Salmonella vaccine can diminish the negative effect of live vaccine growth performance, reducing mortality rate, fecal shedding, and re-isolation of SE from liver, spleen, heart and cecum. The use of probiotic or prebiotic simultaneously with the application of the live Salmonella vaccine is a good practice to diminish the negative effect of the harmful bacteria and improve the growth performance of broilers. Thus, further studies may be carried out with layers and breeders.
Keywords:
Salmonellosis; Enteritidis; probiotic; prebiotic; broilers

Salmonella infection is one of the most critical bacterial diseases affecting poultry, resulting in a high mortality rate and production losses. Moreover, it is one of the most common foodborne bacterial diseases for humans worldwide, especially Salmonella enteritidis and Salmonella typhimurium [1], including more than 2600 serovars belonging to S. enterica which are Gram-negative and facultative anaerobes belonging to the family Enterobacteriaceae [2]. Cha et al. [3] reported that Salmonella infection is widely distributed in poultry in developing countries. It can be isolated more frequently from chicken litter or fecal samples and its incidence rate can range from 0 to 100% [4]. Hence, its effective prevention and control is a necessary measure.
There are various common control measures to reduce or prevent Salmonella organisms’ colonization of the poultry intestinal systems, including feed additives, probiotic or organic acid supplementation of drinking water and the use of vaccines [5]. Inactivated and/or live attenuated vaccines are used to prevent poultry infection with Salmonella organisms through promoting acquired immunity [6]. Salmonella vaccination has been proven to have some advantages that include reduction of transmission rate, either horizontal or vertical, of Salmonella among broiler breeder and/or broiler chicks [7], lowering the prevalence rate of contaminated table eggs with this pathogen [8] and improving survival rate [9]. Nevertheless, Berghaus et al. [10] reported that this measure cannot decrease the environmental contamination of a breeder farm with Salmonella.
Competitive exclusion (CE) through the use of probiotics is another technique for preventing Salmonella infections in newly hatched chicks [11]. Its mechanism of action depends on the rapid substitution of intestinal microflora by a culture of specific living microorganisms, primarily Lactobacillus spp. [12] to produce immediate resistance against field pathogen colonization. Moreover, the administration of the Lactobacillus spp. culture can modulate cytokine gene expression induced by Salmonella, and thus reduce its pathogenicity in chickens [13]. Conversely, a non-viable component of food, termed prebiotic, provides binding sites of pathogenic bacteria to be flushed out the gut [14]. Glucomannan, is an example for this type of preventive measure, which is an extracted polysaccharide from Saccharomyces cerevisiae cell wall. Not only does it prevent adhesion of pathogenic bacteria such as Salmonella and Escherichia coli to the enterocyte membranes and stimulate an immune response, it also modulates the intestinal microflora inducing a positive effect for bird performance [15,16].
Moreover, the use of probiotics and prebiotics, as well as their combinations, has proven to have beneficial health effects in poultry production [17,18,19]. The aim of this study was the comparative efficacy of a commercial probiotic or prebiotic and their combination with a live attenuated Salmonella Enteritidis (SE) vaccine on the protection of broiler chickens experimentally challenged with SE.

This study was conducted according to the suggestions and guidelines of the advisory group on the ethics of animal experiments at Alexandria University, Egypt.

A live lyophilized attenuated vaccine, Salmonella enteritidis, strain Sm24/Rif 12/Ssq, (Elanco Co., Cuxhaven, Germany) is a mutant strain derived from metabolic alterations (Metabolic Drift Mutants) (EFSA, 2004) and cited by Bérto [20]. It was administered via drinking water to the chicks, at the 7th day of age, as one dose, containing at least 108 CFU, according to manufacturer instructions.

An isolate of SE from newly hatched chicks was serotyped and identified by ERIC PCR in the study by Sedeik et al. [21]. It was centrifuged at 3000 rpm for 10 min and the sediment was diluted with sterile phosphate buffer saline and adjusted to contain 109 CFU/mL using a McFerland matching tube to be used for challenging. According to the method of Timms [22], the challenge inoculum was prepared at 28 days of age, each bird in the challenged groups was infected orally with 0.5 mL suspension containing 109 CFU/mL SE [23].

Birds in the challenged groups were observed daily for two weeks post-challenge until the end of the study (6 weeks of age) for clinical signs or death. Dead birds were subjected to necropsy for recording the lesions of SE [25].

2.5.2. The Shedding Rate of SE on Cloacal Swabs

Cloacal swabs were taken from chicks individually in each group at arrival and just before experimental infection (at 28 days of age) and examined bacteriologically to ensure that the birds were free from SE. At days 3, 7 and 14 post-challenge, cloacal swabs were collected from all birds in each group individually on a 10 mL tube of tetrathionate broth and incubated overnight at 37 °C. A loopful from the broth was streaked on Salmonella shigella (SS) agar for Salmonella isolation. Suspected colonies were identified morphologically and biochemically, as described by Cherry et al. [26].

Nine birds from each group (3/replicate) were randomly selected weekly post-challenge, sacrificed, and then the spleen, heart, cecum and liver were collected for SE re-isolation. The homogenized tissue samples were incubated overnight in 1% peptone broth then 1 mL suspension was added to 9 mL tetrathionate broth and incubated at 37 °C for 24 h. A total of 200 µL suspension was sub-cultured on SS agar and incubated for 24 h at 37 °C. Morphological and biochemical identification of suspected colonies was performed.

Chickens were weighed individually in each replicate and then the birds in each group were subjected to weekly determination of the production parameters that included body weight gain, feed consumption and feed conversion ratio (FCR).

Statistical analysis of obtained results was carried out according to the Petrie and Watson [27] model and the experimental unit. The values of p ≤ 0.05 were considered significant. The statistical analysis was performed using SPSS program (version: 22).

It was concluded that the use of the live SE vaccine has a higher protective effect against SE challenge than probiotic or prebiotic, especially for growth performance and livability rate. But, simultaneous administration of probiotic or prebiotic with live SE vaccine in broiler chickens has a synergistic effect, not only for growth performance and livability rate, but also decreases fecal shedding and re-isolation of SE from different organs, thus reducing environmental contamination with the bacterium.

N.A.E.-S., M.E.S. and A.M.A. designed the study, collected literature, performed the experiment, analyzed the data, and wrote the draft paper. S.I.O. and A.A.A. revised collected data, statistical analysis and the draft manuscript. M.E.A.E.-H. and M.A.E.N. reviewed the manuscript and completed the final paper. All authors have read and agreed to the published version of the manuscript.

This research was funded by the Deanship of Scientific Research at Princess Nourah bint Abdulrahman University through the Fast-Track Research Funding Program. 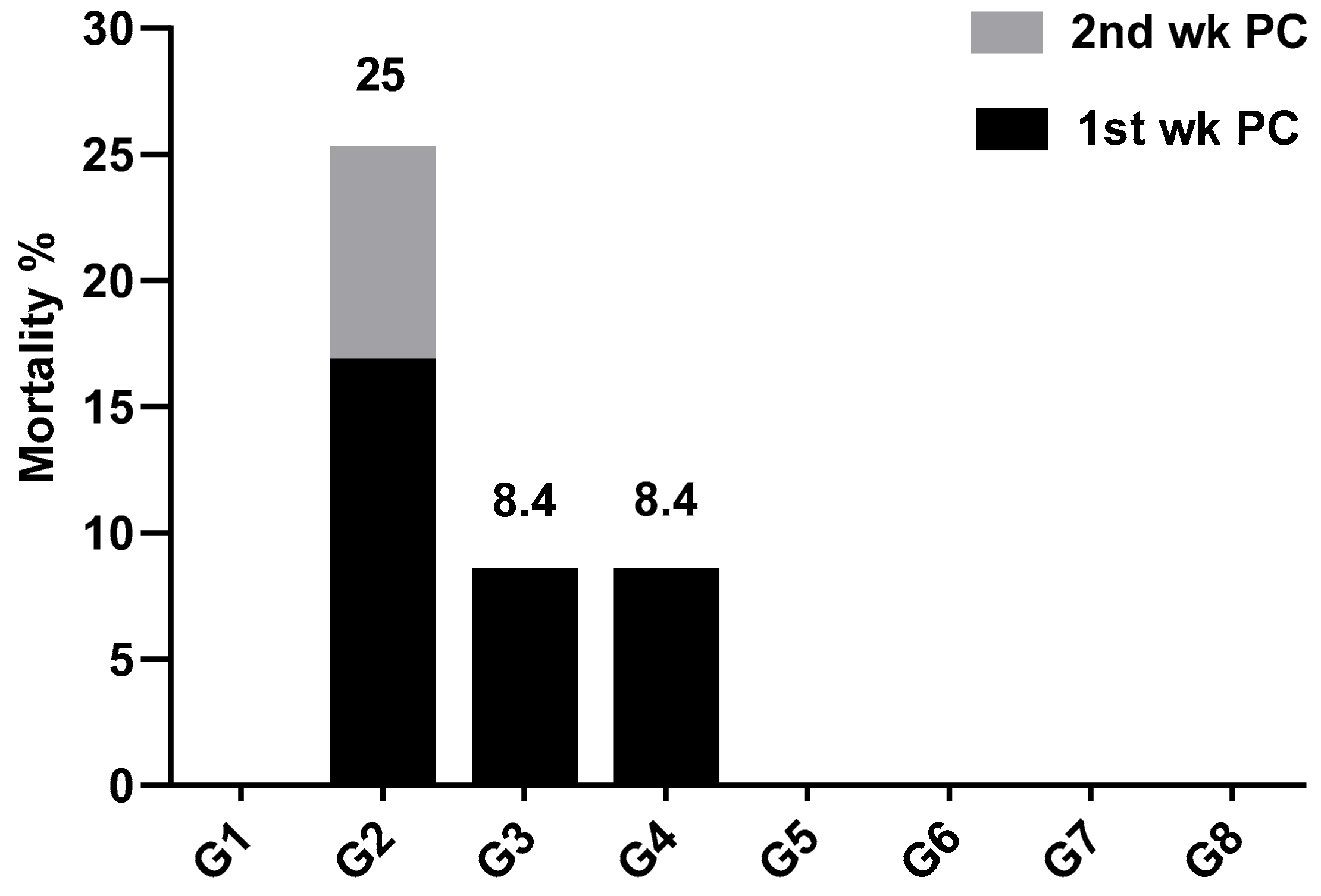 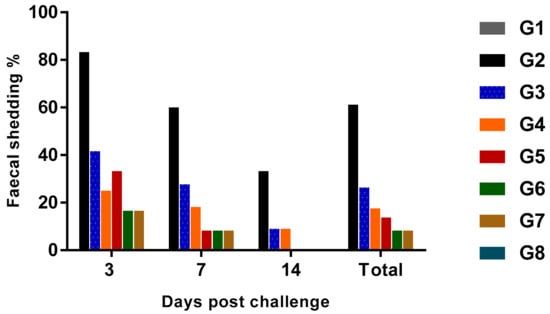 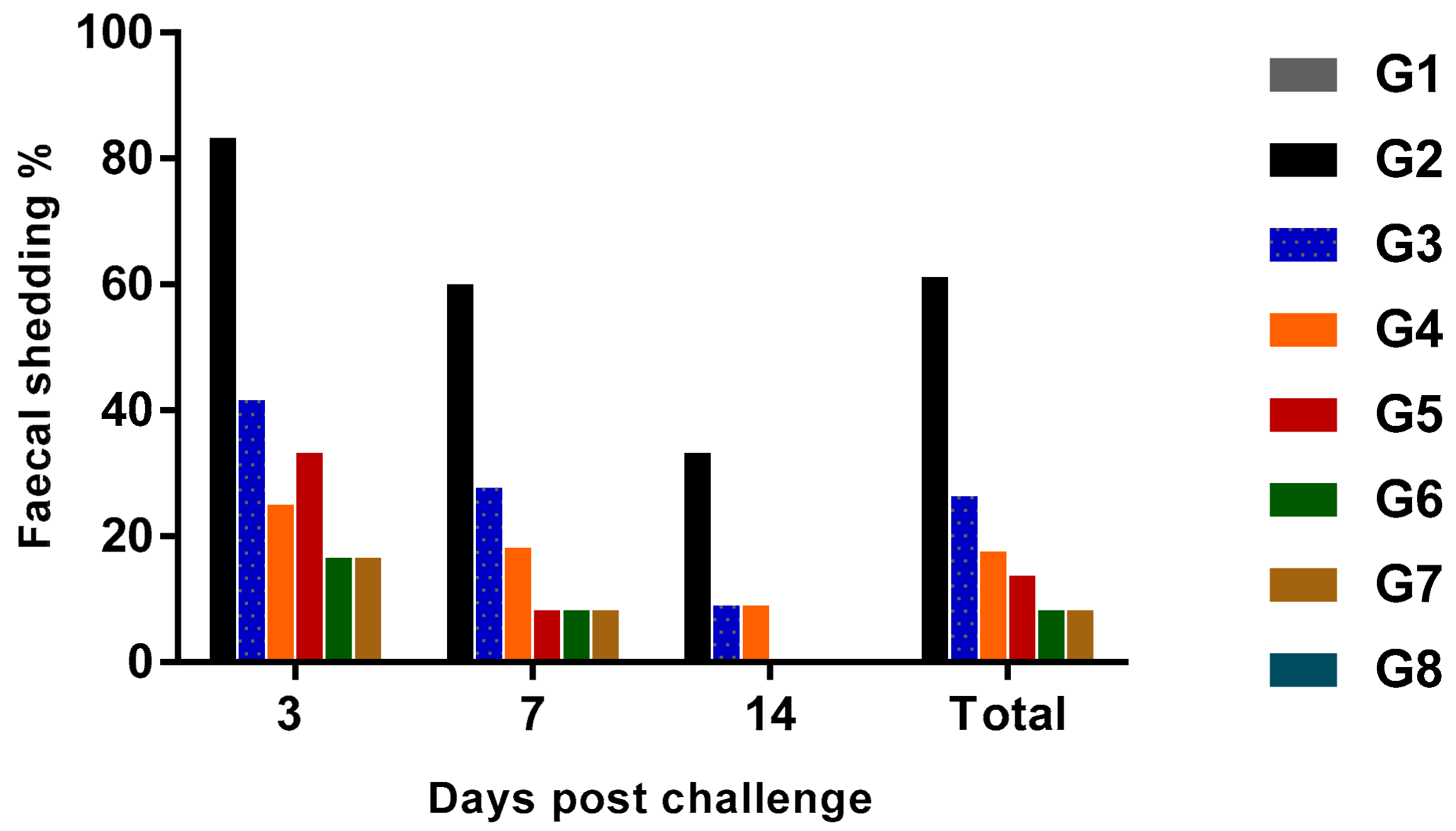 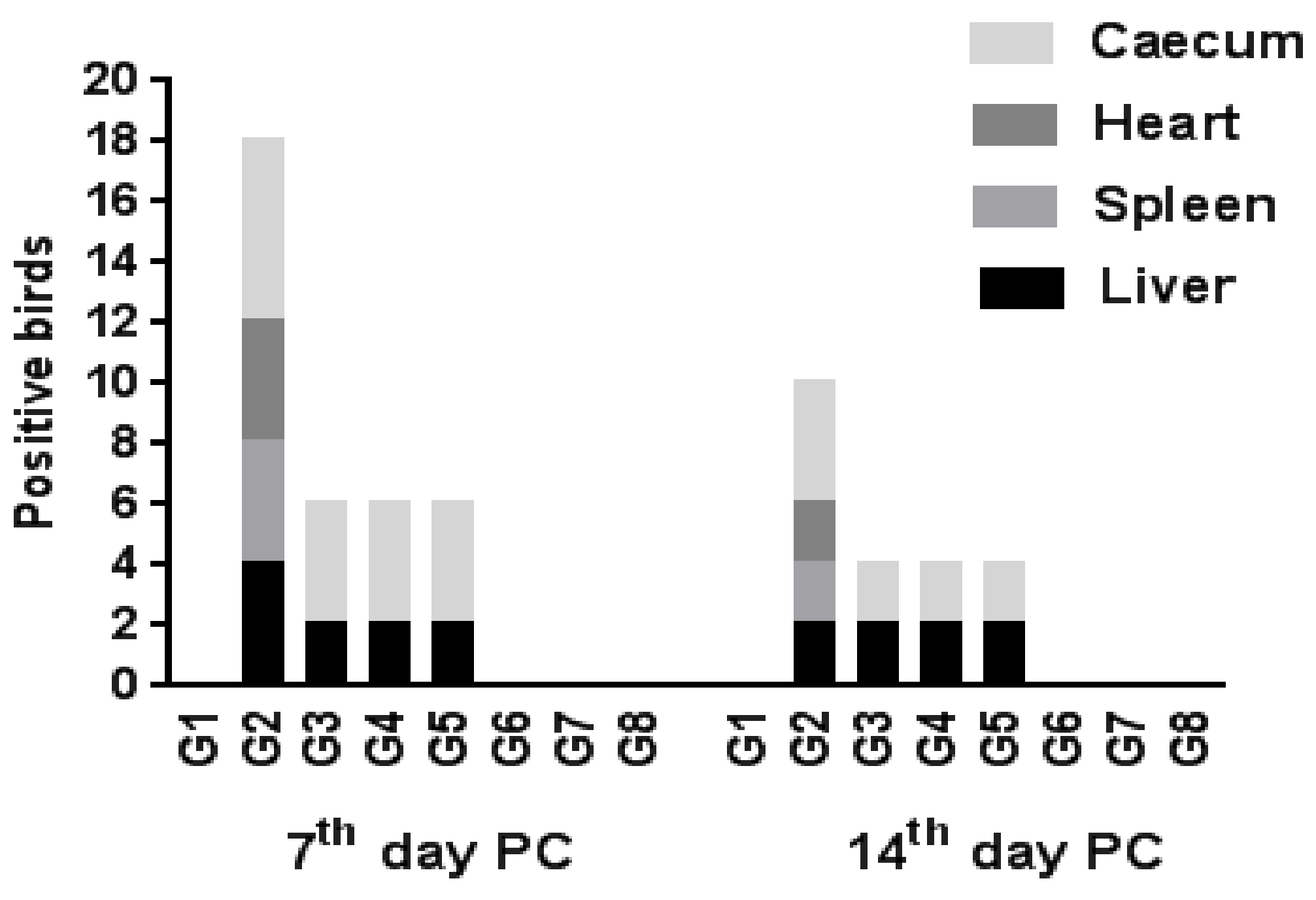