Intrauterine growth retardation (IUGR) is usually defined as fetal growth below the 10th percentile for gestational age and results in impaired growth and development of the fetus and/or its organs during gestation. IUGR not only has a permanent effect on postnatal growth and long-term health, but also results in high fetal mortality and morbidity. Recent results have demonstrated that IUGR can cause jejunum damage in piglets. The jejunum is not only the main organ for the digestion and absorption of nutrients, but also an immune organ in the body. However, few effective methods to alleviate jejunum damage and oxidative stress in IUGR pigs have been found. In recent years, studies have found that curcumin (CUR) may be an effective and safe feed additive for regulating oxidative stress in the body. Our results indicated that dietary added 200 mg/kg curcumin to the basal diet can increase the antioxidant capacity of the IUGR growing pigs, jejunum and alleviate the damage in jejunum of the IUGR growing pigs. Therefore, the use of curcumin as a feed additive has certain economic value.

Intrauterine growth restriction (IUGR), characterized by impaired development of the fetus during pregnancy, is a major threat in animal production because of the harmful effect on postnatal growth performance and health status [1]. A piglet was defined as suffering intrauterine growth restriction when its birth weight was two standard deviations below the mean birth weight of the total population, or the neonatal birth weight of less than 10% with gestational age of normal weight [2,3]. There is increasing evidence showing that IUGR may also have long-term consequences on the offspring resulting in high neonatal morbidity and mortality [4]. The jejunum is not only the main place for the digestion and absorption of nutrients, but also the immune organ in the body [5]. Recent results have demonstrated that IUGR can cause jejunum damage in piglets at 21 and 50 days [6,7,8]. As for the IUGR programming consequences, IUGR might affect the jejunum function of growing pigs, such as immunization, intestinal barrier, proliferation, and apoptosis, but few relevant reports have been reported so far.
IUGR can cause oxidative stress [9]. Previous research has shown that IUGR pigs exhibited decreases in activities of total antioxidant capacity and total superoxide dismutase and increased levels of malondialdehyde (MDA) and protein carbonyl (PC) [10]. The effect of IUGR on jejunum function is closely related to oxidative function. For example, previous research proved that imbalance of antioxidant homeostasis is an important factor contributing to intestinal mucosal injury induced by IUGR [8]. However, few effective methods to alleviate jejunum damage and oxidative stress in IUGR pigs have been found.
In recent years, studies have found that curcumin may be an effective and safe feed additive for regulating oxidative stress in the body. Curcumin is the main ingredient of the spice turmeric (Curcuma longa), and has been administered as traditional medicine in Asia, mainly in China, India, and Iran [11]. The yellow-pigmented fraction of turmeric contains curcuminoids, which are chemically related to its principal ingredient, curcumin. The major curcuminoids present in turmeric are demethoxycurcumin bisdemethoxycurcumin and the recently identified cyclocurcumin [12]. Studies indicate that functional groups associated with curcumin chemical structure including bis-α, β-unsaturated, and β-diketone, two methoxy groups, two phenolic hydroxy groups, and two double-conjugated bonds might play an essential role in antiproliferative and anti-inflammatory activities assigned to curcumin [13].
Curcumin also downregulates cyclin D1, cyclin E, and murine double minute 2 (MDM2); and upregulates tumor protein p53 (p53) [14]. Curcumin has been known for decades as an antioxidative and anti-inflammatory substance [11]. What is more, curcumin has been proven to be a bifunctional antioxidant that exerts antioxidant activity both directly and indirectly by scavenging reactive oxygen species (ROS) and inducing an antioxidant response [15]. Previous studies concluded that curcumin can improve oxidant stability of muscle in broilers [16]. Some research suggested that curcumin is effective in the oxidant–antioxidant imbalance [17]. We have studied the antioxidant function of the jejunum and determined the index of partial immunization, apoptotic and intestinal tight junction protein. We speculate that curcumin may regulate the jejunum function of IUGR growing pigs through the Nrf2/Keap1 signaling pathway. Our trials are designed to provide a reliable reference for the prevention and treatment of intestinal function injury in animals.

All the procedures were carried out in accordance with the Chinese Guidelines for Animal Welfare and Experimental Protocol, and were approved by the Institutional Animal Care and Use Committee of Nanjing Agricultural University, China (NJAU-CAST-2015-098).

At the time of parturition (114 days gestation), a total of 24 IUGR and 12 normal-birth weight (NBW) female crossbred (Duroc × Landrace × Large White) piglets chosen from 12 sows were used in this study. Two IUGR and one NBW piglets were selected from each litter. At weaning (26 days), all piglets were randomly assigned into 3 groups (each group with 12 piglets). The NBW group and the IUGR group were fed the basal diet, and the IUGR + CUR group was fed the basal diet supplemented with 200 mg/kg curcumin (Guangdong Kehu Biotechnology Research and Development Center; Guangzhou, China, purity ≥ 98%). The effective content of curcumin (200 mg/kg) was selected according to previous study [18].
The pigs were fed under the same conditions of temperature, humidity, and ventilation, and pigs had water and food ad libitum. We cleaned the pig house every day and cleaned the drinking water pipes regularly, and ventilated in time. The immunization procedure was carried out as usual.
At the end of feeding trial (115 days old), 6 pigs (fasting for 12 h) were selected from each group, euthanized by electrical stunning, and exsanguinated. The jejunal mucosa samples were frozen in liquid nitrogen and stored at −80 °C for further determination.

2.3. Assay of Antioxidant Index in the Jejunal Mucosa

The jejunal mucosa samples were homogenized in ice-cold 0.90% sodium chloride buffer (w:v, 1:9). The supernatant was obtained by centrifugation at 5000× g for 10 min at 4 °C, which was used for the further determination. MDA (kit number: A003-1-1), total superoxide dismutase (T-SOD, kit number: A001-1-1), glutathione peroxide enzyme (GPx, kit number: A005-1-1) and total antioxidant capacity (T-AOC, kit number: A015-1-1, FRAP) were determined with corresponding commercial kits purchased from Nanjing Jiancheng Bioengineering Institute (Nanjing, China). The activities of T-SOD, T-AOC, and GPx were expressed as units (U) per milligram of protein. The concentration of MDA was expressed as nanomoles per milligram of protein.

The protein of the jejunal mucosa was extracted with a strong cell lysate containing Phenylmethanesulfonyl fluoride (PMSF; Beyotime Institute of Biotechnology, Nantong, China), and the protein concentration in the supernatant was determined by a BCA kit (Beyotime Institute of Biotechnology, Nantong, China) The adjusted protein concentration was diluted to 10 μg/μL with a cell lysate containing PMSF, then 5 times sodium dodecyl sulfate (SDS) supernatant gel buffer was added, and then protein was denatured at 99 °C on a PCR machine. A suitable concentration of SDS-PAGE gel was prepared according to the molecular weight of the detected protein; 10 μL of the protein sample and the pre-stained protein marker were directly loaded into the SDS-PAGE gel-loading well; then electrophoresis was performed. After the end of the electrophoresis, the gel was cut to an appropriate size, and a similarly sized polyvinylidene fluoride (PVDF) membrane (soaked for at least 15 s in methanol) was cut; then, the membrane was transferred in transfer solution. After the membrane was transferred, it was blocked with a 5% skim milk powder solution. Then, the membranes were incubated overnight with primary antibodies: Nrf2 (1:1000; Proteintech; Rosemont, IL, USA), keap1 (1:1000; Proteintech; Rosemont, IL, USA), NQO1 (1:1000; Proteintech; Rosemont, IL, USA), α-Tubulin (1:1000; Proteintech; Rosemont, IL, USA) at 4 °C. The membranes were washed in TBST three times and were processed with secondary antibody (1:5000; Proteintech; horseradish-peroxidase-conjugated goat anti-rabbit immunoglobulin G (IgG); Rosemont, IL, USA) for 60 min at room temperature. The blots were developed using an enhanced Chemiluminescence reagents (Merck Millipore, Darmstadt, Germany) followed by autoradiography. Images were recorded using a Luminescent Image Analyzer LAS-4000 system (Fujifilm, Tokyo, Japan) and were quantified by Image-Pro Plus 6.0 (Media Cybernetics, MD, USA). α-tubulin was used as the internal standard to normalize the signals.

The results of the test were calculated by Excel 2016. Data were expressed as means with SEM (standard error of mean) and analyzed by one-way ANOVA using the SPSS 25.0 software (SPSS, Inc., Chicago, IL, USA). Multiple comparisons were performed by Duncan’s method. The data were expressed as mean ± standard error; when p < 0.05, the difference was considered significant.

3.1. Antioxidant Index in the Jejunal Mucosa

Effects of dietary curcumin on antioxidant capacity of jejunal mucosa in IUGR growing pigs are shown in Table 2. Results showed that pigs in IUGR group had higher MDA content (p < 0.05) than pigs in NBW group. Compared with the IUGR group, dietary added 200 mg/kg of curcumin significantly decreased MDA content (p < 0.05), and increased T-SOD (p < 0.05) activity in jejunal mucosa. In addition, there were no significant differences in antioxidant enzyme activities of GPx and T-AOC among the three groups (p > 0.05).

3.3. Hsp70 Expression in the Jejunal Mucosa

In conclusion, IUGR can cause oxidative stress in the jejunum of growing pigs, destroy the antioxidant defense system, increase apoptosis, and reduce jejunum immunity. The addition of 200 mg/kg curcumin to the diet may alleviate the jejunum oxidative stress of the IUGR growing pigs and improve the jejunum antioxidant function through the Nrf2/Keap1 pathway, thereby further improving the jejunum immune function of IUGR pigs, and improving jejunal tight junction, but the relevant mechanisms are need further research. The beneficial effect of curcumin requires further development, and our findings may be helpful in exploiting a new healthcare product and provide a new basis for alleviating IUGR offspring jejunum oxidative damage. 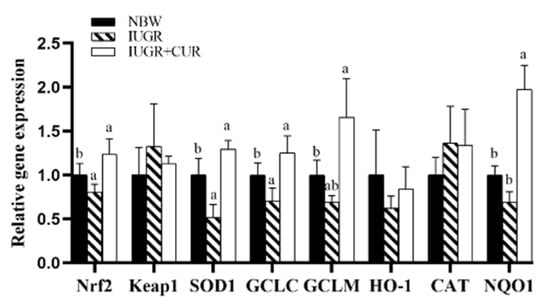 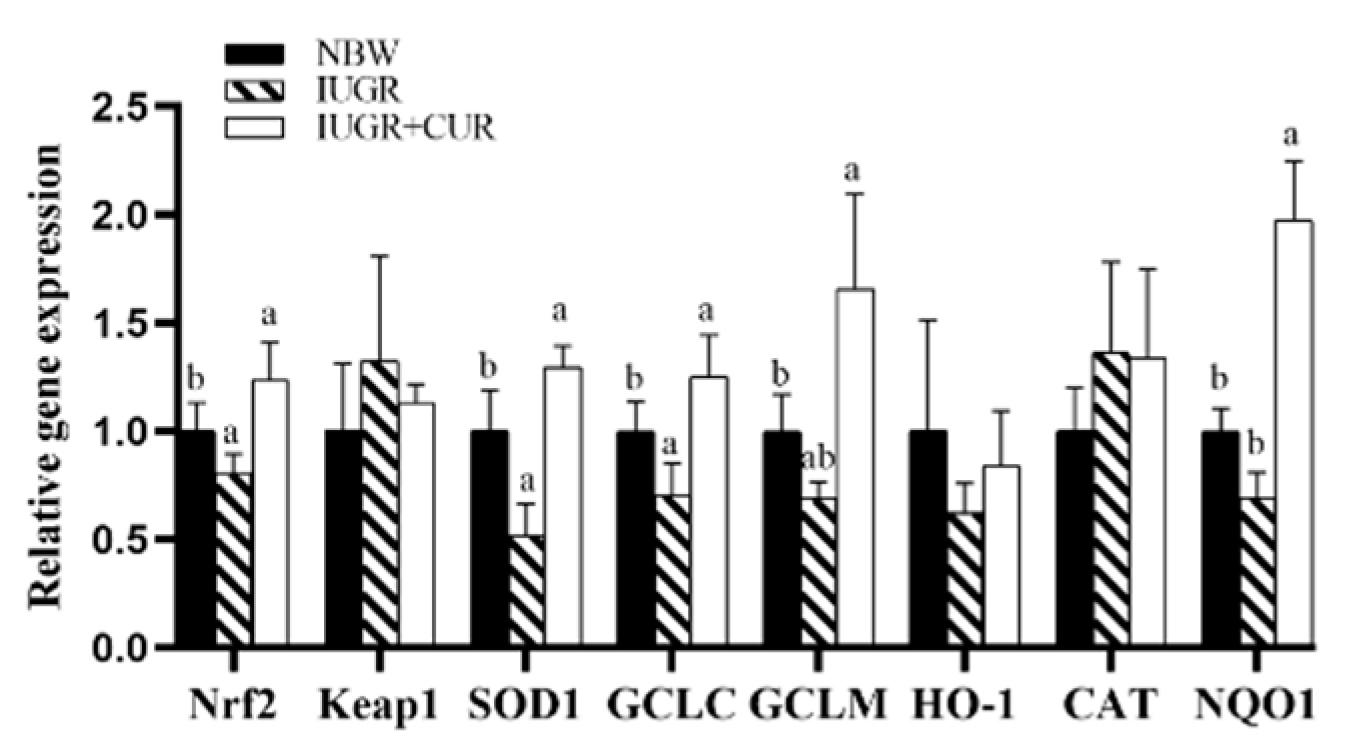 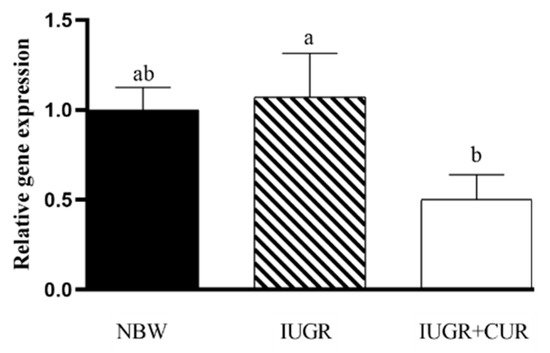 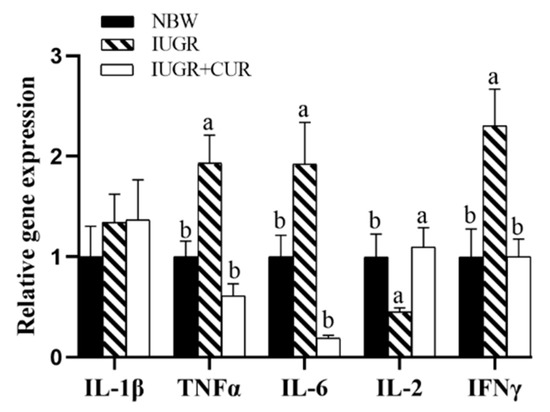 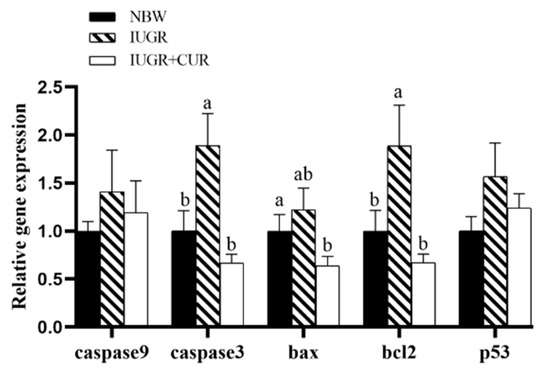 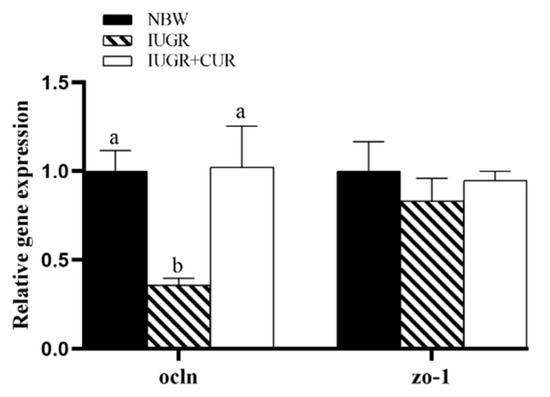 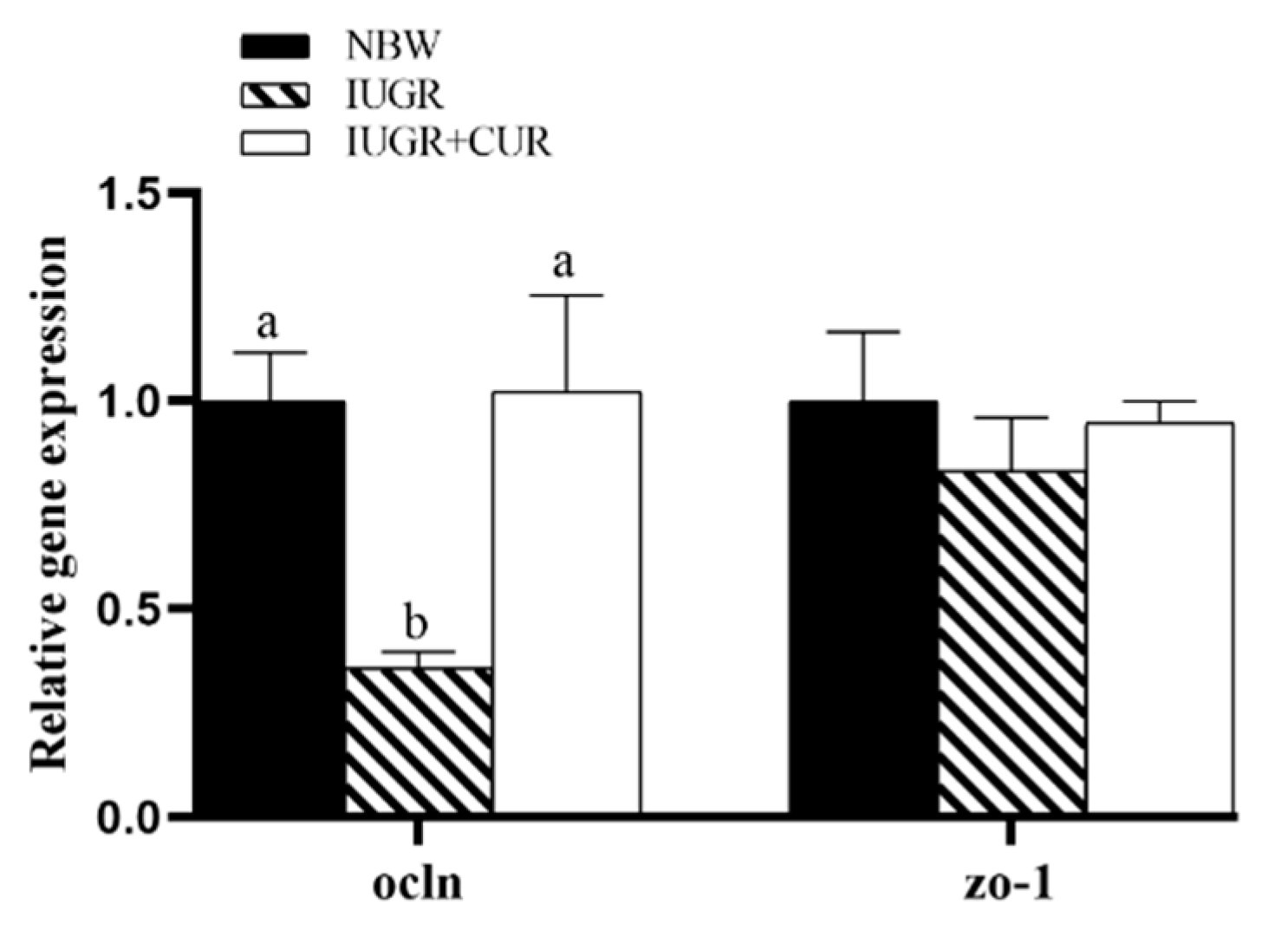 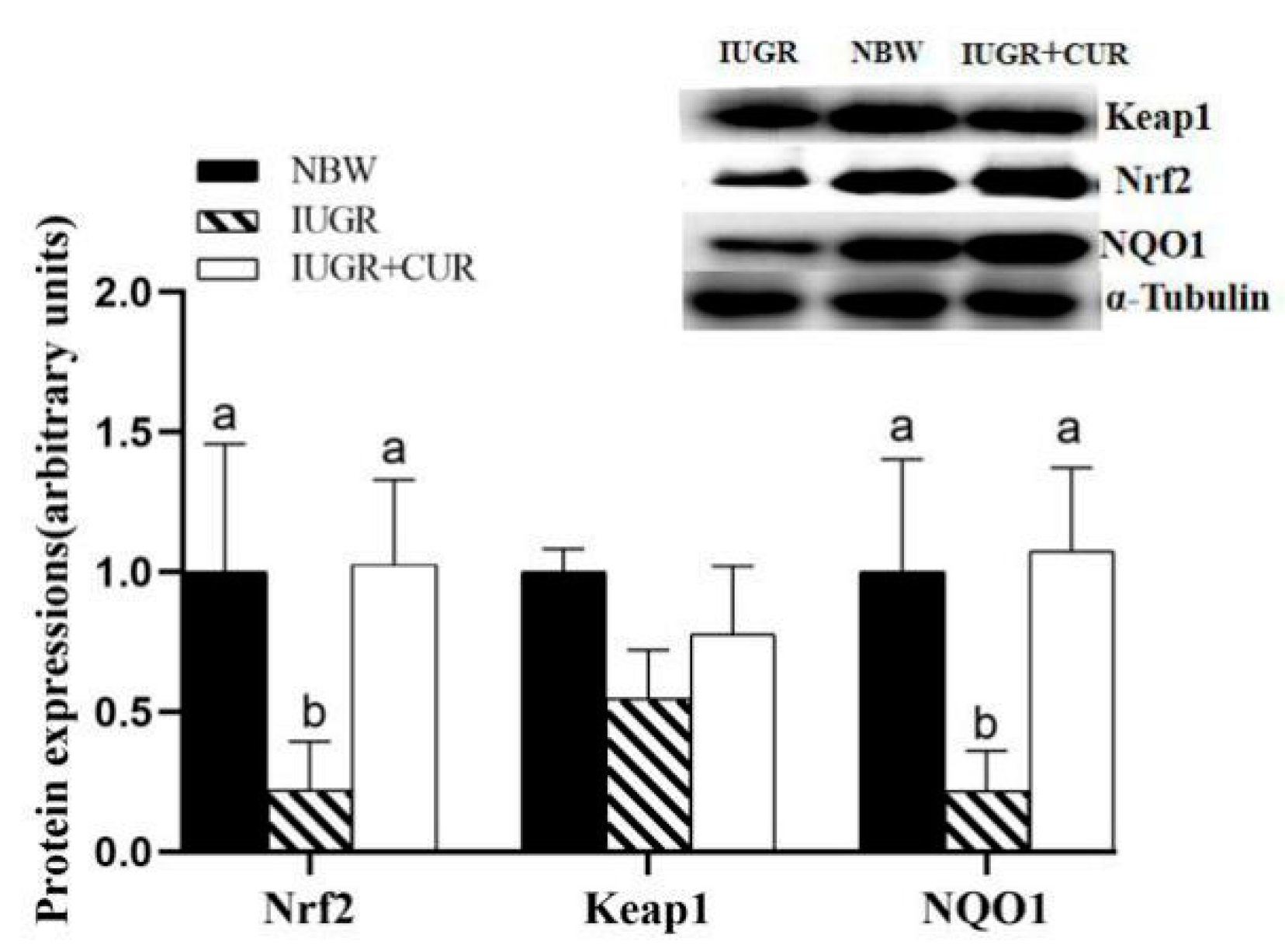