Insect meal is a suitable alternative to fishmeal (FM) in aquaculture feed. In recent years, numerous authors have studied the effects of insect meal as a substitute for fishmeal on fish growth performance, while only a few papers investigated its influence on the physiology and morphology of the digestive system and the oxidative status. The present study evaluated the effects of dietary highly defatted Hermetia illucens larva meal (H) inclusion and a vegetable protein based diet (VEG) on histological traits of liver and distal intestinal and oxidative stress biomarkers of liver and kidney in Siberian sturgeon juveniles. The results show that both the VEG and the H diets did not influence the liver and gut histology, but the highest inclusion level of H led to changes in oxidative stress biomarkers. Overall, these findings highlighted the possibility to include up to 18.5% of H as FM replacement in Siberian sturgeon diets without affecting the health status of fish.

A growth trial was conducted at the experimental facility of the Department of Agricultural, Forest and Food Sciences (DISAFA) of the University of Torino (Italy) as reported in Caimi et al. [19]. The experimental protocol was designed according to the guidelines of the current European Directive (2010/63/EU) [47] on the protection of animals used for scientific purposes and approved by the Ethical Committee of the University of Turin (Italy) (protocol N° 143811).

The experimental design, diets, and fish management are described in detail by Caimi et al. [19]. Briefly, four isonitrogenous (crude protein—CP: 50.5 g 100 g−1, as it), isolipidic (ether extract—EE: 12.4 g 100 g−1, as it), and isoenergetic (gross energy—GE: 20.84 MJ kg−1, as it) diets were formulated (Table 1) as follows: one control diet (HIM0) containing a high level (70%) of FM, two diets contained increasing inclusion levels of highly defatted HIM (Hermetia Deutschland GmbH & Co. KG, Baruth/Mark, Germany) in substitution for 25% (HIM25) and 50% (HIM50) of FM (corresponding to an inclusion level of 18.5% and 37.5%, as fed basis, respectively), and one vegetable protein based diet (VEG), formulated to mimic currently available commercial feeds (containing 32% of FM and 49% of plant protein sources).
To conduct the trial, a total of 440 fish were lightly anesthetised (MS222 100 mg L−1; PHARMAQ Ltd., Fordingbridge, UK), individually weighed, and randomly allocated to 16 tanks (22 fish per tank). Fish were fed in quadruplicate with the four experimental diets as detailed in Caimi et al. [19]. In the growth trial, an additional treatment where FM was completely substituted by including 75% of the insect meal (HIM100) was also formulated and distributed to the same number of tank replicates. However, due to a very low diet acceptance and in respect of the fish welfare, this treatment was stopped and excluded from any further investigations. To give a brief summary about the fish growth performance, sturgeons fed HIM50 showed a reduced feed consumption compared to HIM0 diet (2823.15 and 3003.04 g DM, respectively), thus resulting in a diminished final body weight (141.94 g and 159.32 g, respectively), weight gain (117.73 g and 135.12 g, respectively), and specific growth rate (1.48% and 1.59%/day, respectively).
At the end of the growth trial (118 days), fish were fasted for 24 h and three fish per tank (12 fish per treatment) were sacrificed by over-anaesthesia (MS-222-PHARMAQ Ltd., Fording bridge, UK; 300 mg L−1) to collect 12 portions of liver and 5 distal intestines (spiral valve) for histological analyses and 12 portions of liver and kidney for biochemical analyses.

Sections of liver and distal intestine (spiral valve) were collected and fixed in 10% buffered formalin from 12 and 5 fish/treatment, respectively. The collected tissues were dehydrated in a graded ethanol series and embedded in paraffin wax blocks. Sections of 4 ± 2 μm thicknesses were cut with a microtome (Leica SM2000R, Leica Biosystem, Wetzlar, Germany), mounted on glass slides, and stained with Mayer Haematoxylin & Eosin (HE). The HE liver sections were examined by means of light microscopy in order to evaluate the following histological changes: nuclear displacement, cytoplasm vacuolization, lymphocytic infiltrates, and necrotic tissue areas. The observed histopathological findings on HE liver sections were assessed using a four-graded semi quantitative scoring system as follows (Table 2): absence of alterations (score 0); mild alterations (score 1); moderate alterations (score 2); severe alterations (score 3).
Gut sections were stained with the periodic acid-Schiff (PAS), which identified the neutral mucins in magenta [49]. One slide per intestinal section was examined by light microscopy. Five randomly selected high power fields per each slide were captured with a Nikon DS-Fi1 digital camera to a Nikon microscope (Nikon Instruments Europe B.V., Milan, Italy) using a 10× objective lens and NIS-Elements Ar 4.50.0064 Software (Nikon Instruments Europe B.V., Italy) was used for image capturing. The villus height (Vh) was evaluated on 5 villi per captured field (25 villi/sample) and the total number of PAS-positive goblet cells (GC) was counted on the five captured fields, according to Baeza-Arino et al. [35] and Pryor et al. [50]. Gut sections were also stained with Mayer Haematoxylin & Eosin (HE) and examined by means of light microscopy in order to evaluate the lymphocytic infiltrates using the above-mentioned four-graded semi quantitative scoring system (Table 2).

Prior to statistical analysis, all the obtained data were evaluated for normality of distribution by Shapiro–Wilk’s test and when the assumption was not satisfied a logarithmic data transformation was applied. The Vh, number of GC and biomarker data were analysed by one-way ANOVA using IBM SPSS Statistics v. 25.0 for Windows.
The following model was used: Yij = μ + Di + εij, where Yij = observation; μ = overall mean; Di = effect of diet (HIM0, HIM25, HIM50, VEG); εij = residual error.
Tukey’s HSD test was performed to discriminate the differences between the experimental treatments and the control groups. The histopathological scores were analysed by means of the Kruskal–Wallis test (post-hoc test: Dunn’s Multiple Comparison test). Results are given as mean and SD. The criterion for significance was set at p < 0.05.

One of the limiting factors of including insect meal in fish feed is their chitin content, which is able to determine gut and liver histological changes [16]. In particular, chitin could affect liver lipid accumulation [20] and may induce intestinal inflammation [52]. The histological effects on liver and gut by HIM utilization in diets for different fish species have already been characterized, with different results being obtained until now [16,20,24,31]. Our results showed that up to 37.5% of highly defatted HIM can be included in Siberian sturgeon feed without any negative effects on spiral valve and liver histology.
No histopathological alterations were observed in the liver of Siberian sturgeons fed HIM based diets. This result is in agreement with those observed in Japanese seabass [29], Atlantic salmon [30,31], zebrafish (Danio rerio) [52], and rainbow trout [16] fed with HIM meal. On the contrary, Li et al. [20] observed significant alterations in liver (decrease hepatopancreas fat deposition and increase in mild necrosis and apoptosis of hepatocytes) in Jian carp (Ciprinus carpio var. Jian) fed 7.9% inclusion level of HIM. Another recent study shows that inclusion level up to 40% of mopane worm meal (Imbrasia belina) worsened liver degradation, probably caused by the high fiber content in the mopane worm [24].
In most fish species, the dynamics of absorption decrease proceeding towards the posterior tract of the intestine. Since in sturgeon the maximum nutrient absorption takes place in the posterior intestine (spiral valve) [53], this segment was herein considered. In the present study, no significant differences were observed between the Vh and the number of GC between HIM0, VEG, and HIM-fed sturgeons. This is in agreement with what was reported in rainbow trout [16,54], post smolt Atlantic salmon [30], and Japanese seabass [29] fed with HIM meal. Another study conducted in Siberian sturgeon fed with HIM-based diet [18] showed that in the proximal intestine, the inclusion of 15% of full-fat HIM did not affect the villus height, but the authors reported a reduction in the thickness of mucosa and increase in muscle layer thickness—changes that have been associated with an enhancement of the digestion and absorption process.
An increase in the number of GC in the distal intestine is usually associated with an immune reaction during the inflammation process and a decrease in nutrient absorption [35]. These gut mucin dynamics are frequently related to high inclusion levels of VP sources in fish diets [7,35]. In particular, the use of VP may cause morphological alterations capable of affecting the optimal nutrient absorption [6,55]. However, the effects of VP usually vary on varying the species, the protein source, and the level of inclusion [35,56,57,58]. Based on the authors’ knowledge, the effects of VP on the liver and gut histology of sturgeon have been only characterized by Kittel et al. [59]. In particular, the authors formulated four experimental diets for shovelnose sturgeon (Scaphirhynchus platorhynchus) containing increasing levels of soybean meal (from 0 to 51.23%) as partial replacement of FM and highlighted histopathological signs of distal enteritis in fish fed soybean meal-based diets confirming what was reported by previous studies [6,34,55].

The authors gratefully acknowledge Dario Sola, and Mario Colombano for the technical support, and Hermetia Deutschland GmbH & Co. KG for the provision of insect meal. 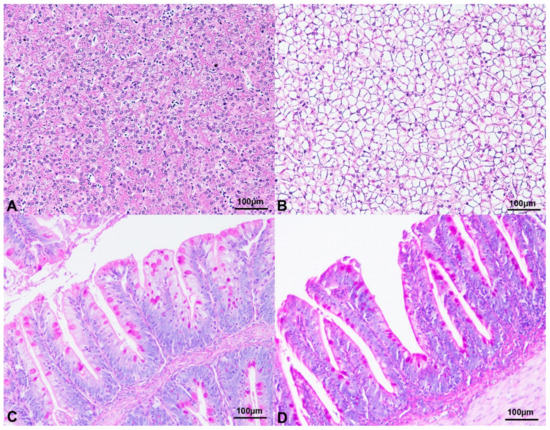 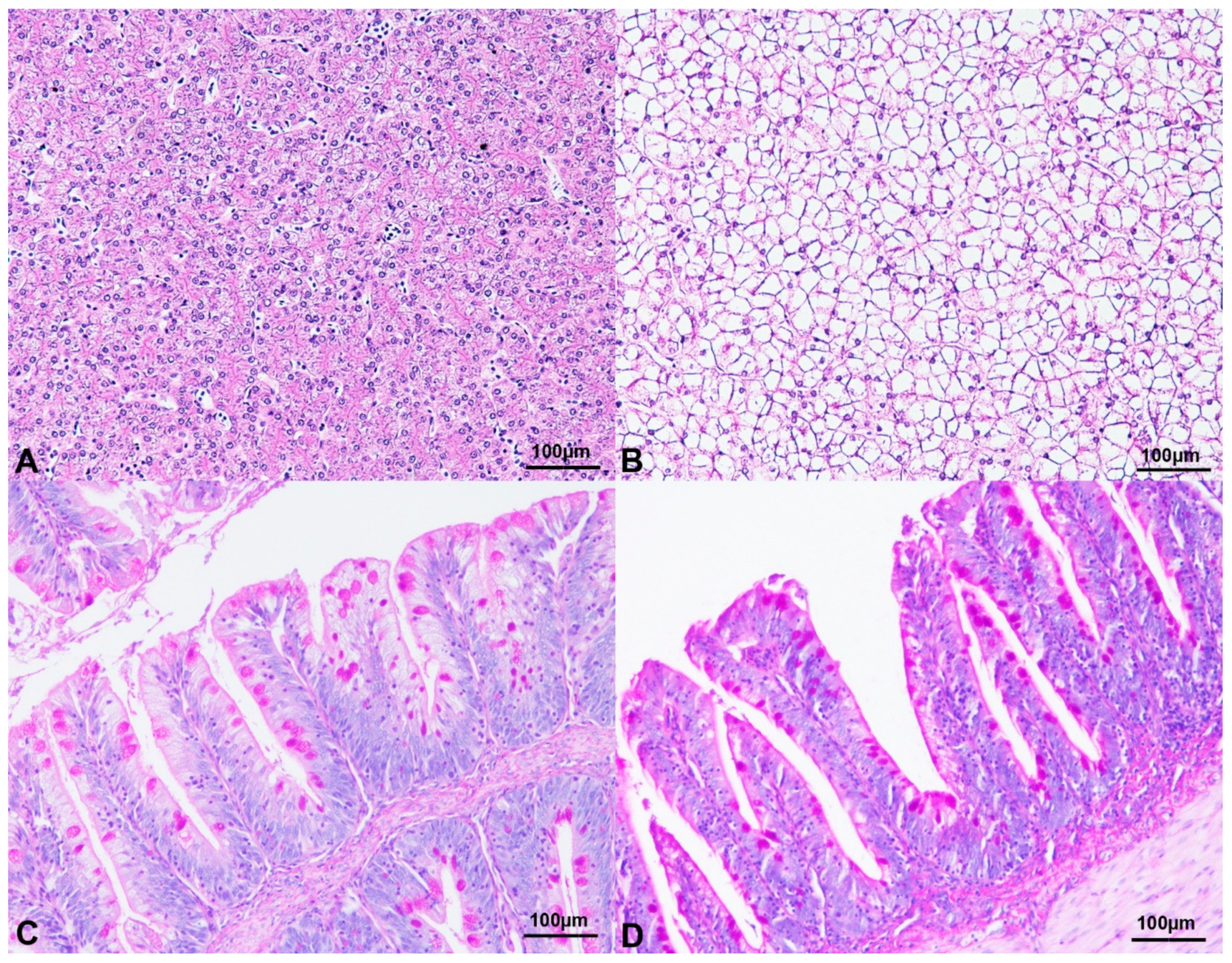