Re-Emergence of Salmonellosis in Hog Farms: Outbreak and Bacteriological Characterization
Next Article in Special Issue

Bacteriophage-Mediated Control of Phytopathogenic Xanthomonads: A Promising Green Solution for the Future
Previous Article in Journal

A thorough knowledge of genotypic and phenotypic variations (e.g., virulence, resistance to antimicrobial compounds) in bacteria causing plant disease outbreaks is key for optimizing disease surveillance and management. Using a comprehensive strain collection, tandem repeat-based genotyping techniques and pathogenicity assays, we characterized the diversity of X. citri pv. citri from the South West Indian Ocean (SWIO) region. Most strains belonged to the prevalent lineage 1 pathotype A that has a wide host range among rutaceous species. We report the first occurrence of genetically unrelated, nonepidemic lineage 4 pathotype A* (strains with a host range restricted to Mexican lime and related species) in Mauritius, Moheli and Réunion. Microsatellite data revealed that strains from the Seychelles were diverse, grouped in three different clusters not detected in the Comoros and the Mascarenes. Pathogenicity data suggested a higher aggressiveness of strains of one of these clusters on citron (Citrus medica). With the noticeable exception of the Comoros, there was no sign of recent interisland movement of the pathogen. Consistent with this finding, the copL gene, a marker for the plasmid-borne copLAB copper resistance that was recently identified in Réunion, was not detected in 568 strains from any islands in the SWIO region apart from Réunion. View Full-Text
Keywords: molecular epidemiology; citrus; Asiatic canker; copper resistance; aggressiveness molecular epidemiology; citrus; Asiatic canker; copper resistance; aggressiveness
►▼ Show Figures 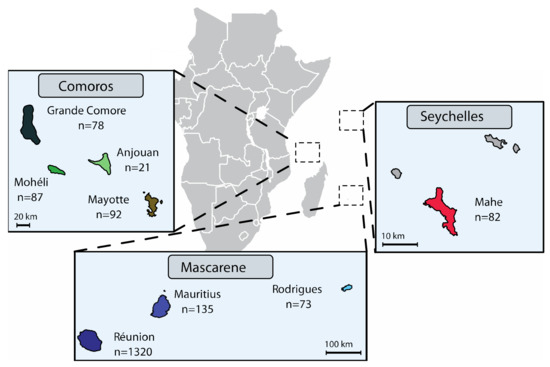