Microbial Hydroxysteroid Dehydrogenases: From Alpha to Omega
Next Article in Special Issue

Streptococcus pneumoniae two-component regulatory systems (TCSs) are important systems that perceive and respond to various host environmental stimuli. In this study, we have explored the role of TCS09 on gene expression and phenotypic alterations in S. pneumoniae D39. Our comparative transcriptomic analyses identified 67 differently expressed genes in total. Among those, agaR and the aga operon involved in galactose metabolism showed the highest changes. Intriguingly, the encapsulated and nonencapsulated hk09-mutants showed significant growth defects under nutrient-defined conditions, in particular with galactose as a carbon source. Phenotypic analyses revealed alterations in the morphology of the nonencapsulated hk09- and tcs09-mutants, whereas the encapsulated hk09- and tcs09-mutants produced higher amounts of capsule. Interestingly, the encapsulated D39∆hk09 showed only the opaque colony morphology, while the D39∆rr09- and D39∆tcs09-mutants had a higher proportion of transparent variants. The phenotypic variations of D39ΔcpsΔhk09 and D39ΔcpsΔtcs09 are in accordance with their higher numbers of outer membrane vesicles, higher sensitivity against Triton X-100 induced autolysis, and lower resistance against oxidative stress. In conclusion, these results indicate the importance of TCS09 for pneumococcal metabolic fitness and resistance against oxidative stress by regulating the carbohydrate metabolism and thereby, most likely indirectly, the cell wall integrity and amount of capsular polysaccharide. View Full-Text
Keywords: Streptococcus pneumoniae; two-component system 09; carbohydrate metabolism; capsule Streptococcus pneumoniae; two-component system 09; carbohydrate metabolism; capsule
►▼ Show Figures 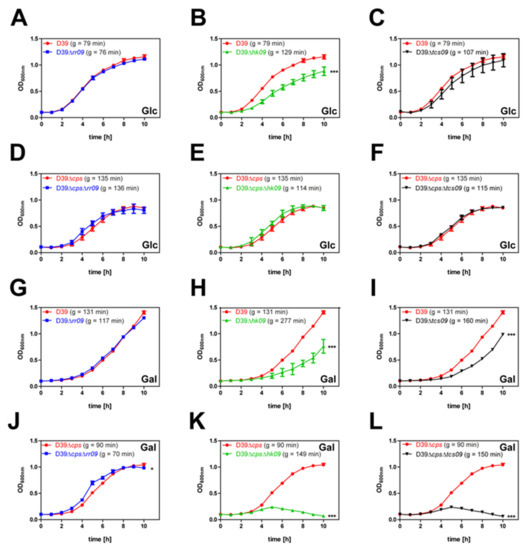