Prevalence of ESβL, AmpC and Colistin-Resistant E. coli in Meat: A Comparison between Pork and Wild Boar
Previous Article in Journal

Cereals are still one of the most important food and feed sources, thus determining cereal’s safety, i.e., compliance with legislation, is extremely important. As systematic investigations of nowadays unavoidable secondary fungal metabolites and other common legally regulated contaminants occurrence in Croatian cereals are still lacking, this research aims to monitor the contamination levels of nation-wide crops by mycotoxins, pesticide residues, and heavy metals by employing UHPLC-MS/MS, GC-MS/MS, and atomic absorption spectrometer (AAS) validated analytical methods. The most common secondary fungal metabolites were found to be Fusarium mycotoxins, with DON being the most occurring present in 73.7% of the samples. At least one pesticide residue was found in 331.8% of the samples, and Hg and Cd were the most occurring heavy metals. A total of 8.5% of the samples was non-compliant to the European Union (EU) legislation for food regarding the found mycotoxins concentrations, 4.5% regarding pesticide residues and none regarding heavy metals. The unusual presence of certain pesticide residue and heavy metal indicates the importance of systematic control of the contaminant presence, in order to gather enough occurrence data for proper risk assessment that these contaminants represent for the consumer’s health. View Full-Text
Keywords: mycotoxins; pesticide residues; heavy metals; occurrence data; food and feed safety mycotoxins; pesticide residues; heavy metals; occurrence data; food and feed safety
►▼ Show Figures 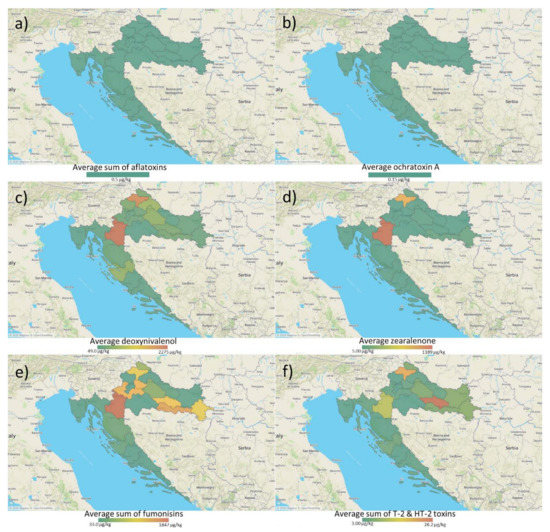