Biological soil crusts (biocrusts) accommodate diverse communities of phototrophic and heterotrophic microorganisms. Heterotrophic protists have critical roles in the microbial food webs of soils, with Cercozoa and Endomyxa often being dominant groups. Still, the diversity, community composition, and functions of Cercozoa and Endomyxa in biocrusts have been little explored. In this study, using a high-throughput sequencing method with taxon-specific barcoded primers, we studied cercozoan and endomyxan communities in biocrusts from two unique habitats (subarctic grassland and temperate dunes). The communities differed strongly, with the grassland and dunes being dominated by Sarcomonadea (69%) and Thecofilosea (43%), respectively. Endomyxa and Phytomyxea were the minor components in dunes. Sandonidae, Allapsidae, and Rhogostomidae were the most abundant taxa in both habitats. In terms of functionality, up to 69% of the grassland community was constituted by bacterivorous Cercozoa. In contrast, cercozoan and endomyxan communities in dunes consisted of 31% bacterivores, 25% omnivores, and 20% eukaryvores. Facultative and obligate eukaryvores mostly belonged to the families Rhogostomidae, Fiscullidae, Euglyphidae, Leptophryidae, and Cercomonadidae, most of which are known to feed mainly on algae. Biocrust edaphic parameters such as pH, total organic carbon, nitrogen, and phosphorus did not have any significant influence on shaping cercozoan communities within each habitat, which confirms previous results from dunes. View Full-Text
Keywords: Cercozoa; eukaryvory; feeding behavior; functional traits; soil food web Cercozoa; eukaryvory; feeding behavior; functional traits; soil food web
►▼ Show Figures 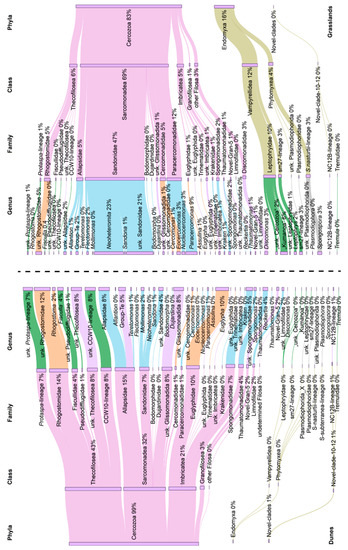