d-Aspartate oxidase (DDO) is a peroxisomal flavoenzyme that catalyzes the oxidative deamination of acidic d-amino acids. In the yeast Cryptococcus humicola strain UJ1, the enzyme ChDDO is essential for d-Asp utilization and is expressed only in the presence of d-Asp. Pyruvate carboxylase (Pyc) catalyzes the conversion of pyruvate to oxaloacetate and is involved in the import and activation of certain peroxisomal flavoenzymes in yeasts. In this study, we analyzed the role of Pyc in the expression of ChDDO gene in C. humicola strain UJ1. PYC gene disruption (∆Chpyc1) in strain UJ1 resulted in growth retardation on glucose and NH4Cl medium. The growth was restored by supplying oxaloacetate from l-Asp or α-ketoglutarate by a transaminase. On the other hand, the supply of oxaloacetate from d-Asp by ChDDO was not able to prevent growth retardation because of a significant decrease in ChDDO gene expression at the transcriptional level. The addition of pyruvate significantly decreased ChDDO gene transcription in the ∆Chpyc1 strain but increased the same in the wild-type strain, even though the intracellular pyruvate content was similar in both strains. These results suggest that ChDDO gene expression might be regulated by pyruvate metabolism, as well as by the presence of d-Asp. View Full-Text
Keywords: d-aspartate oxidase; pyruvate carboxylase; Cryptococcus humicola; d-aspartate; gene expression d-aspartate oxidase; pyruvate carboxylase; Cryptococcus humicola; d-aspartate; gene expression
►▼ Show Figures 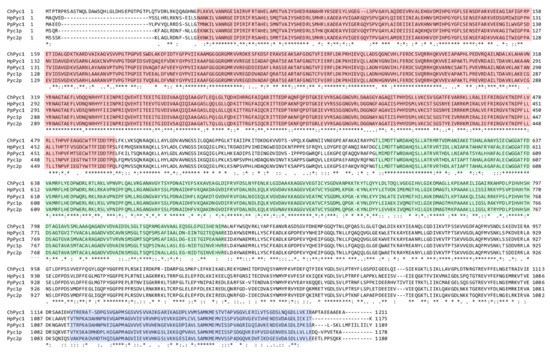