Resistance to last resort antibiotics in bacteria is an emerging threat to human and animal health. It is important to identify the source of these antimicrobial resistant (AMR) bacteria that are resistant to clinically important antibiotics and evaluate their potential transfer among bacteria. The objectives of this study were to (i) detect bacteria resistant to colistin, carbapenems, and β-lactams in commercial poultry farms, (ii) characterize phylogenetic and virulence markers of E. coli isolates to potentiate virulence risk, and (iii) assess potential transfer of AMR from these isolates via conjugation. Ceca contents from laying hens from conventional cage (CC) and cage-free (CF) farms at three maturity stages were randomly sampled and screened for extended-spectrum β-lactamase (ESBL)-producing Enterobacteriaceae, carbapenem-resistant Acinetobacter (CRA), and colistin resistant Escherichia coli (CRE) using CHROMagar™ selective media. We found a wide-spread abundance of CRE in both CC and CF hens across all three maturity stages. Extraintestinal pathogenic Escherichia coli phylogenetic groups B2 and D, as well as plasmidic virulence markers iss and iutA, were widely associated with AMR E. coli isolates. ESBL-producing Enterobacteriaceae were uniquely detected in the early lay period of both CC and CF, while multidrug resistant (MDR) Acinetobacter were found in peak and late lay periods of both CC and CF. CRA was detected in CF hens only. blaCMY was detected in ESBL-producing E. coli in CC and CF and MDR Acinetobacter spp. in CC. Finally, the blaCMY was shown to be transferrable via an IncK/B plasmid in CC. The presence of MDR to the last-resort antibiotics that are transferable between bacteria in food-producing animals is alarming and warrants studies to develop strategies for their mitigation in the environment.
Keywords: ESBL-producing Enterobacteriaceae; colistin resistant Escherichia coli; carbapenem-resistant Acinetobacter; hens; maturity stages; plasmid ESBL-producing Enterobacteriaceae; colistin resistant Escherichia coli; carbapenem-resistant Acinetobacter; hens; maturity stages; plasmid

The rise of antimicrobial resistant (AMR) bacteria is a serious threat to human and animal health, as increasing resistance to commonly used antibiotic therapies have created a burden on treatment options [1]. AMR bacteria can arise in nature and are commonly found in food producing animals like poultry [2]. For instance, the gastrointestinal tract (GIT) of chickens and the facilities that house these poultry serve as reservoirs for AMR resistant bacteria [3,4]. Of these AMR bacteria, extended-spectrum β-lactamase (ESBL) producing Enterobacteriaceae, carbapenem-resistant Acinetobacter (CRA), and colistin resistant E. coli (CRE) are emerging AMR bacteria found in the poultry environment [5,6,7]. The Centers for Disease Control and Prevention (CDC) lists ESBL-producing Enterobacteriaceae and CRA as serious and urgent threats, respectively [8]. Although not explicitly listed as an antibiotic resistant threat by the CDC, colistin resistance is clinically relevant given its use as a last resort antibiotic for treating multidrug resistant (MDR) infections [9]. As poultry is one of the most consumed meat sources globally [10], it is crucial to identify the presence and prevalence of these AMR populations in the poultry environment and understand the spread of these resistances to other bacteria.
Bacteria primarily acquire AMR genes by horizontal gene transfer (HGT), a leading contributor to bacterial coevolution [11]. Conjugative plasmids are responsible for HGT of virulence and AMR genes, which has led to the rapid rise of AMR in bacterial pathogens [12,13]. Recently, the transfer of mobile colistin resistance (mcr) and ESBL-producing genes have been linked to a variety of plasmid types and bacterial hosts in the poultry environment [14,15]. As AMR populations persist in the poultry environment, there is an increased risk that pathogens might acquire AMR genes.
Although E. coli and Acinetobacter are commensal gut bacteria in poultry and are detected in the feed, feces, and environment of poultry facilities, both E. coli and Acinetobacter have the potential to cause extraintestinal diseases in both humans and poultry [16,17,18,19,20,21,22]. Importantly, extraintestinal pathogenic E. coli (ExPEC) infections are often highly fatal in humans and poultry and are increasing worldwide, imposing a major burden on public health [23]. As pooling of these potential pathogens and AMR genes are taking place in poultry, it is important to detect both AMR genes and associated virulence markers that can identify potential pathogens. There are limited studies that investigate the role of production environments (i.e., conventional cage [CC] versus cage-free [CF]) and maturity stages (i.e., early, peak, and late lay) on AMR emergence. In commercial farms, layer hens can be categorized by the period in which egg production begins (early), is at its highest (peak), and later diminishes due to age (late). Studies have shown that the maturity stage of layer hens can impact the colonization and shedding of particular bacteria and the diversity of bacteria inhabiting the GIT [24,25]. Recently, our study has shown that different layer maturity stages exhibit differing levels of Enterobacteriaceae in CC and CF conditions [26]. We thus hypothesized that both environment and maturity may play a role in AMR diversity and potential virulence detection.
In this study, we examined ceca contents from hens in commercial CC and CF environments as potential reservoirs for CRA, CRE, and ESBL-producing Enterobacteriaceae. Potential spread of these resistances was examined as well as the virulence potential of E. coli isolates. We were able to identify MDR Acinetobacter, ESBL-producing E. coli, and widespread presence of CRE in both CC and CF environments. Phylogenetic and virulence screening identified possibly MDR ExPEC isolates in both environments. Finally, AMR was demonstrated to be transferable in the CC environment via plasmid mediated HGT.

Ceca contents from hens in two commercial farms (CC and CF) located in Iowa were previously sampled, flash frozen, and stored at −80 °C between May and September of 2017 [24]. Samples were collected from three laying stages: (i) early lay (17–23 weeks), (ii) peak lay (25–39 weeks), and (iii) late lay (64–88 weeks) from the CC and CF commercial farms in Iowa. A total of 20 hens were randomly sampled for each maturity group in each facility (N = 20 × 3 maturities × 2 facilities = 120 total). The samples were analyzed as described in (Figure 1) and detailed below.

Initially, 0.2 g ceca content samples were resuspended in 200 μL of sterile PBS, and 20 μL of suspensions were then added to CHROMagar COL-APSE™ (Paris, France) media for the selection of colistin-resistant bacteria. For enrichment of AMR bacteria, original suspensions were mixed with 500 μL Luria-Bertani broth (0.1% glucose) and incubated overnight at 37 °C. Thereafter, 20 μL of enriched suspensions were pipetted onto CHROMagar Orientation™ agar (Paris) to detect ESBL-producing Enterobacteriaceae and CHROMagar SuperCARBA™ (Paris) to detect carbapenem-resistant bacteria. Plates were incubated at 37 °C for up to 48 h to allow for the growth of slow growing bacteria like Acinetobacter spp. [27]. Initially, isolates were speculatively speciated by color change on the CHROMagar™ media according to manufacturer’s instructions. Colistin resistant bacteria were enumerated, and cultures from individual colonies were stored in glycerol solution at −80 °C for future experiments. Colistin resistance was confirmed by growth on Mueller-Hinton agar (MHA) (4 mg/L colistin). Colonies from CHROMagar OrientationTM were later tested on CHROMagar COL-APSE™ and SuperCARBA™ to evaluate multiple resistance. Colonies from CHROMagar SuperCARBA™ were later tested on CHROMagar COL-APSE™ and Orientation™ respectively to evaluate multiple resistance. DNA was extracted from all colistin resistant and ESBL-producing bacteria as described [28] and were screened via polymerase chain reaction (PCR) for the E. coli housekeeping gene, uidA (Table S1). White/cream colonies isolated from CHROMagar Orientation™ and SuperCARBA™ media were speculatively designated as Acinetobacter spp., DNA was extracted, and isolates were confirmed by PCR amplification of the Acinetobacter spp. specific 16S rRNA gene (Table S1) [29]. All positively identified CRE, ESBL-producing E. coli and Acinetobacter, and CRA were thereafter screened for resistance to rifampicin (100 μg/mL), tetracycline (15 μg/mL), nalidixic acid (30 μg/mL), ampicillin (50 μg/mL), kanamycin (50 μg/mL), gentamicin (20 μg/mL), and chloramphenicol (20 μg/mL). β-lactamase production was confirmed through resistance to third generation cephalosporins (cefotaxime and ceftazidime) via Clinical and Laboratory Standards Institute (CLSI) guidelines [30]. Furthermore, minimum inhibitory concentration (MIC) of colistin, cefotaxime, and ceftazidime were obtained via agar dilution using CLSI breakpoints [28]. For all antibiotic resistance assays, E. coli K-12 strain MG1655 was used as a negative control. PCRs were performed to identify the presence of various mcr genes, multiple β-lactamase encoded genes, and carbapenemase encoded genes (Table S1). ESBL and mcr multiplexes were utilized as described previously [31,32]. NCBI Primer-blast was used to generate blaTEM primer pairs (https://www.ncbi.nlm.nih.gov/tools/primer-blast/). Positive control strains used in this portion of the study were supplied from the CDC & FDA Antibiotic Resistance Bank (Table S2).

PCRs were performed to identify the common E. coli phylogenetic groups (A, B1, B2, and D) and the presence of virulence factors associated with ExPEC plasmids (cvaC, iroN, iss, and iutA) (Table S1).

AMR E. coli isolates from CC and CF environments contained a variety of plasmids, ranging in size from 6 kb to 150 kb (Figure 6). However, we did not successfully extract plasmids from Acinetobacter isolates under any conditions.
Multiple incompatibility types, including I1, N, HI1, B/O, L/M, P, Y, FIA, FIB, and FIC, were found in E. coli isolates across all laying periods in both environments (Figure 3 and Figure 4). IncFIB plasmids were detected in 38 (58%) and 27 (49%) of CC and CF AMR E. coli respectively (Figure 3 and Figure 4). Furthermore, ESBL-producing E. coli from the CC environment all carried similar plasmids identified as IncK/B plasmids (Figure 3). However, ESBL-producing E. coli from CF did not yield any identified plasmids or replicon types (Figure 4). Replicon types IncA/C, FIIA, T, Frep, X, W, and HI2 were not detected in any isolates in this study.

3.4. blaCMY Can Be Exchanged between Virulent and Non-Virulent E. coli through an IncK/B Plasmid

Using in vitro conjugation assays to uncover a mechanism for β-lactam resistance dissemination, ESBL-producing E. coli (IA-EC-0010 and IA-EC-0018) isolates from CC were able to transfer the resistance of both cefotaxime and ceftazidime to both APEC strain χ7122 and its plasmid-cured derivative χ7368, but not to E. coli K-12 strain χ6092, MG1655, or human commensal HS-4. The AMR transfer was linked with the consistent transfer of a large 106 kb IncK/B plasmid (pIA-EC-0018-2) carrying the blaCMY gene (Figure 5). However, using χ7122 (pIA-EC-0018-2) transconjugants from the previous assay as donors resulted in successful transfer of this large plasmid to χ6092 (Figure 7). The virulence markers iss and iutA that were observed in the donor strains were not transferred to the recipients. CF E. coli were unable to transfer blaCMY under any conditions tested in this study.

Overall, this study identified wide-spread colistin-resistant E. coli and MDR E. coli in all three lay periods in CC and CF hens. AmpC β-lactamase mediated blaCMY was identified in E. coli and Acinetobacter of CC and E. coli of CF. Furthermore, MDR Acinetobacter were detected in peak and late lay periods of both CC and CF, with CF isolates being also resistant to carbapenems. Finally, the AmpC β-lactamase mediated blaCMY was shown to be plasmid-borne in the CC environment only. Future experimental studies will seek environmental and host factors that trigger dissemination of novel and threatening antibiotic resistant patterns to enable comparisons between CC and CF hens, as well as further sequencing of resistant isolates and transferable plasmids to understand the prevalent resistance genes in laying hens of different maturity stages.

This research was supported by Iowa State University Start-up funding and the United States Department of Agriculture (USDA) Hatch project IOW03902 to M.M. The funders played no role in study design, data collection, and interpretation, or the decision to submit the work for publication.

The authors declare that the research was conducted in the absence of any commercial or financial relationships that could be construed as potential conflict of interest. 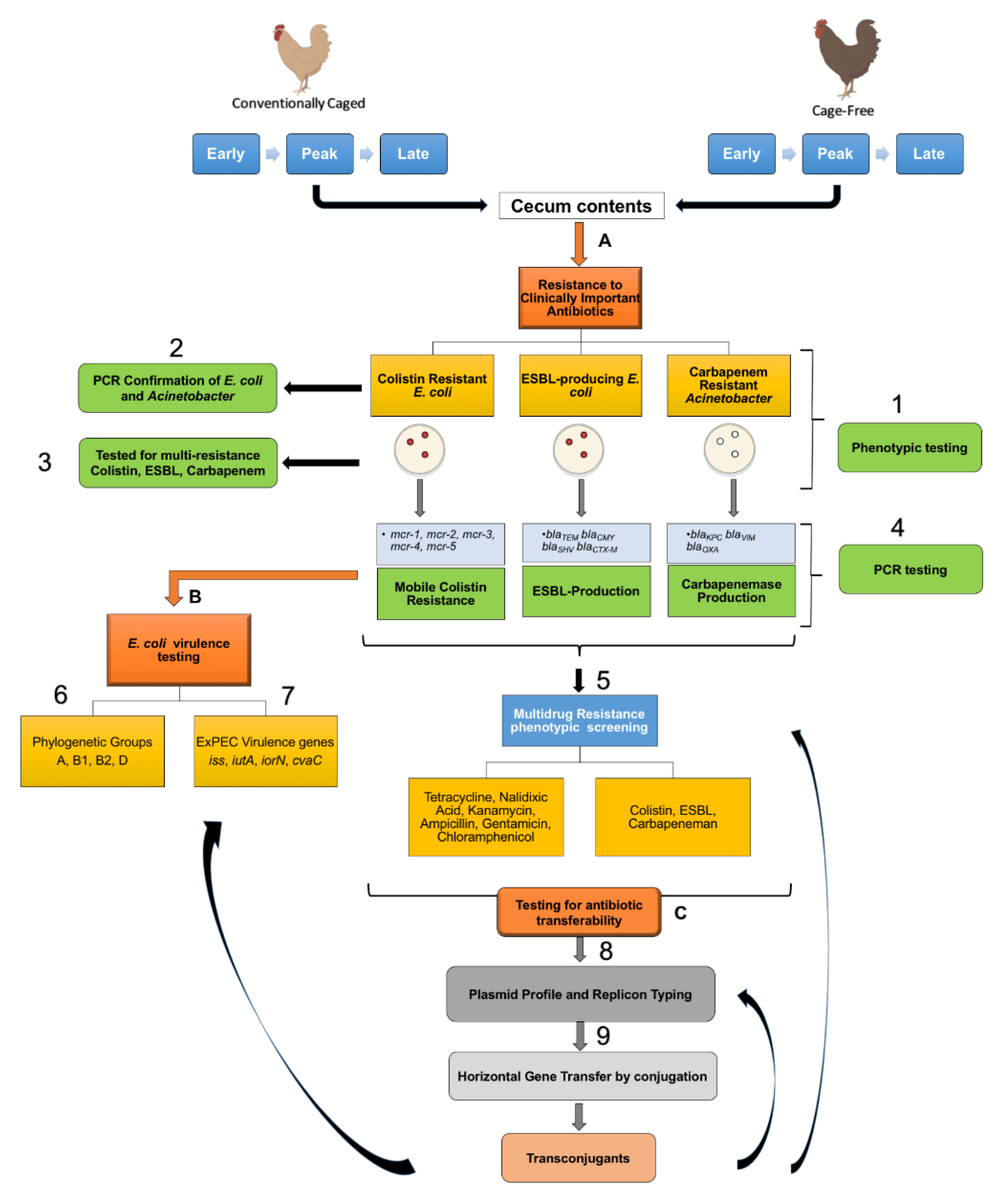 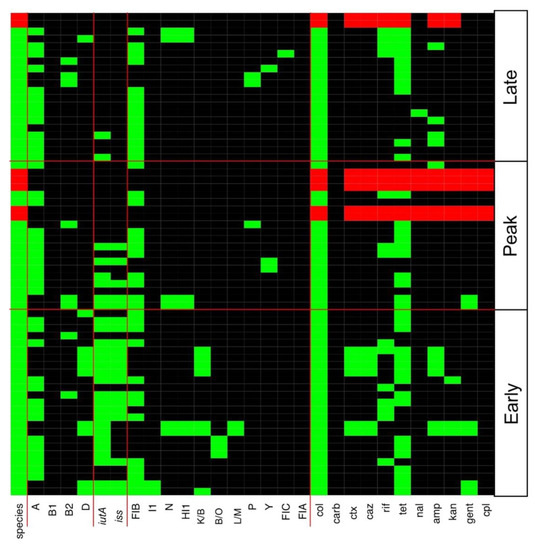 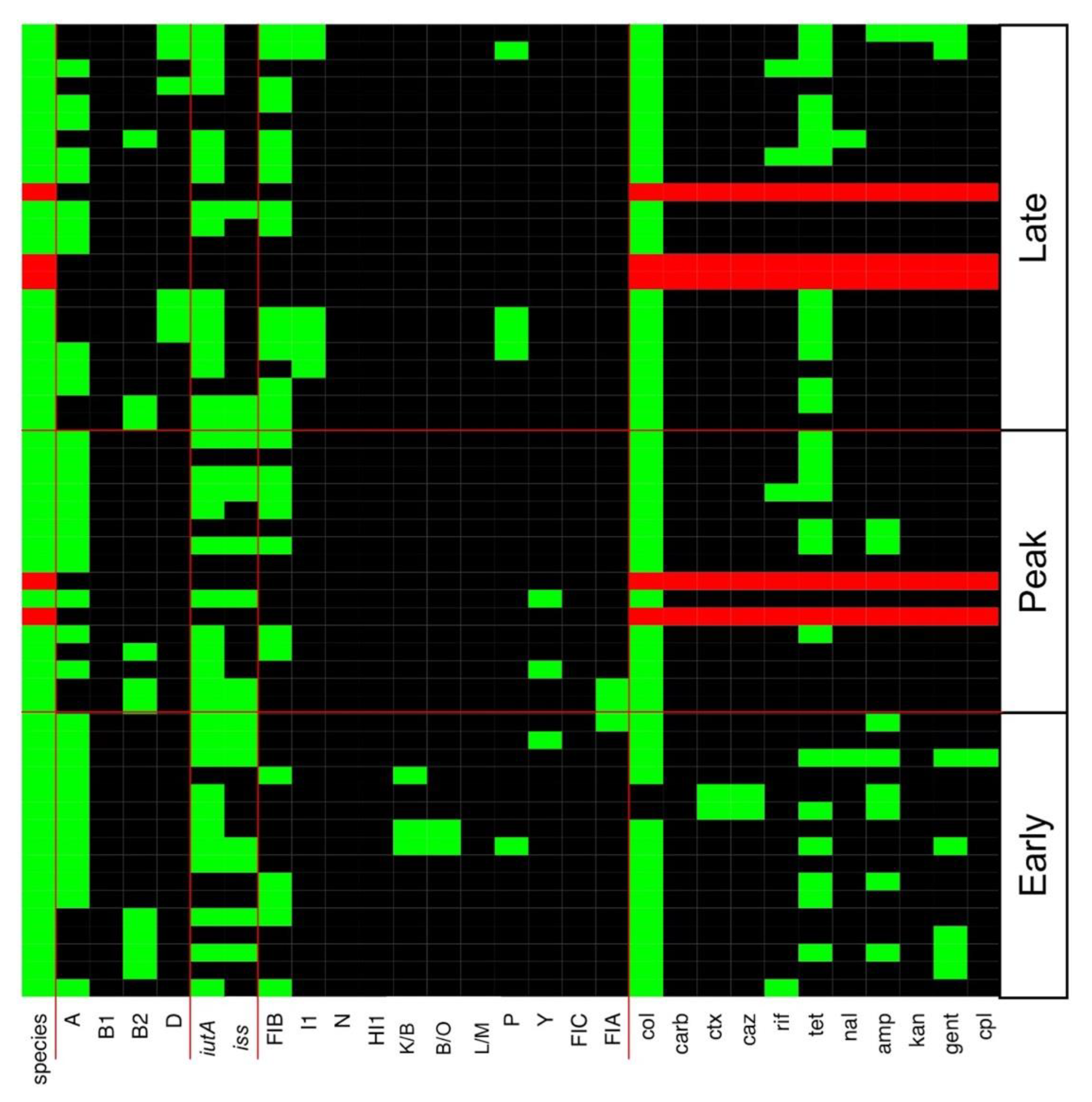 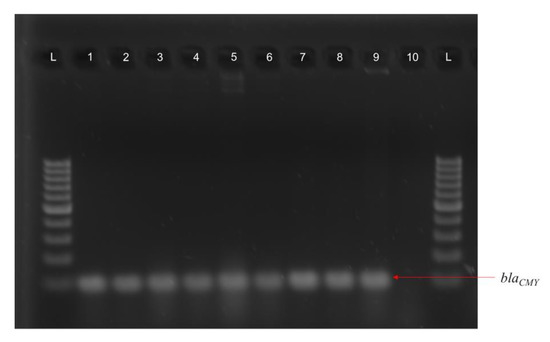 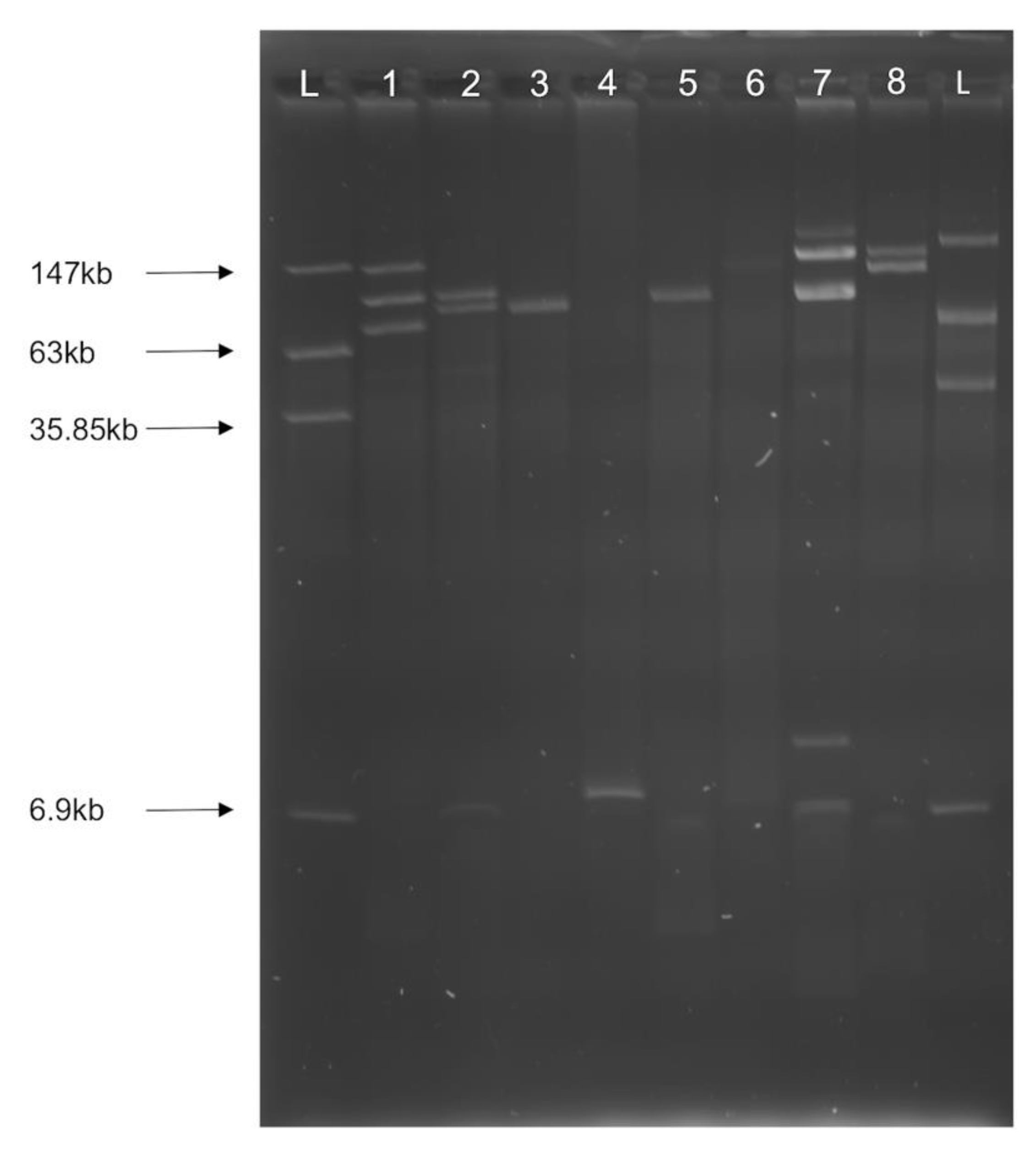 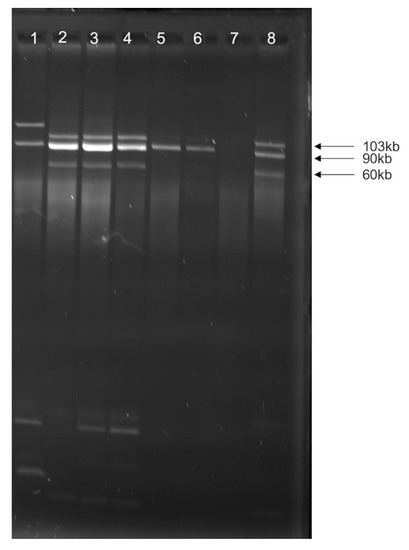