Hot in Cold: Microbial Life in the Hottest Springs in Permafrost

The Earth’s oceans are a huge body of water with physicochemical properties and microbial community profiles that change with depth, which in turn influences their biogeochemical cycling potential. The differences between microbial communities and their functional potential in surface to hadopelagic water samples are only beginning to be explored. Here, we used metagenomics to investigate the microbial communities and their potential to drive biogeochemical cycling in seven different water layers down the vertical profile of the Challenger Deep (0–10,500 m) in the Mariana Trench, the deepest natural point in the Earth’s oceans. We recovered 726 metagenome-assembled genomes (MAGs) affiliated to 27 phyla. Overall, biodiversity increased in line with increased depth. In addition, the genome size of MAGs at ≥4000 m layers was slightly larger compared to those at 0–2000 m. As expected, surface waters were the main source of primary production, predominantly from Cyanobacteria. Intriguingly, microbes conducting an unusual form of nitrogen metabolism were identified in the deepest waters (>10,000 m), as demonstrated by an enrichment of genes encoding proteins involved in dissimilatory nitrate to ammonia conversion (DNRA), nitrogen fixation and urea transport. These likely facilitate the survival of ammonia-oxidizing archaea α lineage, which are typically present in environments with a high ammonia concentration. In addition, the microbial potential for oxidative phosphorylation and the glyoxylate shunt was enhanced in >10,000 m waters. This study provides novel insights into how microbial communities and their genetic potential for biogeochemical cycling differs through the Challenger deep water column, and into the unique adaptive lifestyle of microbes in the Earth’s deepest seawater. View Full-Text
Keywords: Mariana Trench; hadal water; metagenomics; microbial community; function; metagenome-assembled genomes Mariana Trench; hadal water; metagenomics; microbial community; function; metagenome-assembled genomes
►▼ Show Figures 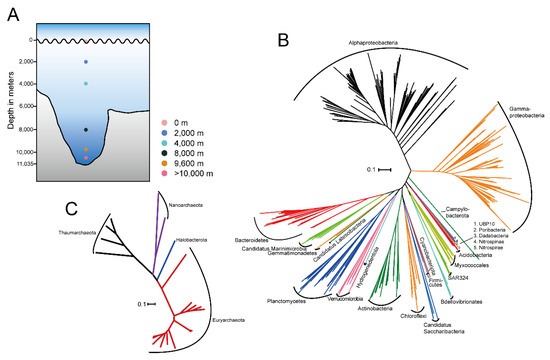