In the Formosa cold seep of the South China Sea (SCS), large amounts of methane and sulfide hydrogen are released from the subseafloor. In this study, we systematically investigated the microbial communities in the seawater–sediment interface of Formosa cold seep using high-throughput sequencing techniques including amplicon sequencing based on next-generation sequencing and Pacbio amplicon sequencing platforms, and metagenomics. We found that Sulfurovum dominated the microbial communities in the sediment–seawater interface, including the seawater close to the seepage, the surface sediments, and the gills of the dominant animal inhabitant (Shinkaia crosnieri). A nearly complete 16S rRNA gene sequence of the dominant operational taxonomic units (OTUs) was obtained from the Pacbio sequencing platforms and classified as OTU-L1, which belonged to Sulfurovum. This OTU was potentially novel as it shared relatively low similarity percentages (<97%) of the gene sequence with its close phylogenetic species. Further, a draft genome of Sulfurovum was assembled using the binning technique based on metagenomic data. Genome analysis suggested that Sulfurovum sp. in this region may fix carbon by the reductive tricarboxylic acid (rTCA) pathway, obtain energy by oxidizing reduced sulfur through sulfur oxidizing (Sox) pathway, and utilize nitrate as electron acceptors. These results demonstrated that Sulfurovum probably plays an important role in the carbon, sulfur, and nitrogen cycles of the Formosa cold seep of the SCS. This study improves our understanding of the diversity, distribution, and function of sulfur-oxidizing bacteria in deep-sea cold seep. View Full-Text
Keywords: cold seep; seawater–sediment interface; sulfur-oxidizing bacteria; Campylobacterota; Sulfurovum cold seep; seawater–sediment interface; sulfur-oxidizing bacteria; Campylobacterota; Sulfurovum
►▼ Show Figures 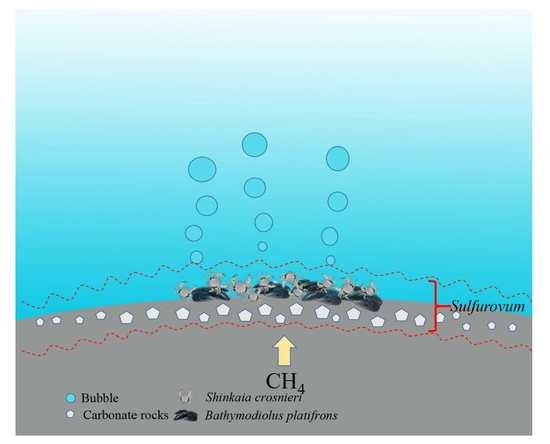