Understanding the Response of Nitrifying Communities to Disturbance in the McMurdo Dry Valleys, Antarctica

Antarctica has one of the most extreme environments on Earth, with low temperatures and low nutrient levels. Antarctica’s organisms live primarily in the coastal, ice-free areas which cover approximately 0.18% of the continent’s surface. Members of Cyanobacteria and eukaryotic algae are important primary producers in Antarctica since they can synthesize organic compounds from carbon dioxide and water using solar energy. However, community structures of photosynthetic algae in Antarctica have not yet been fully explored at molecular level. In this study, we collected diverse algal samples in lacustrine and hydro-terrestrial environments of Langhovde and Skarvsnes, which are two ice-free regions in East Antarctica. We performed deep amplicon sequencing of both 16S ribosomal ribonucleic acid (rRNA) and 18S rRNA genes, and we explored the distribution of sequence variants (SVs) of these genes at single nucleotide difference resolution. SVs of filamentous Cyanobacteria genera, including Leptolyngbya, Pseudanabaena, Phormidium, Nodosilinea, Geitlerinama, and Tychonema, were identified in most of the samples, whereas Phormidesmis SVs were distributed in fewer samples. We also detected unicellular, multicellular or heterocyst forming Cyanobacteria strains, but in relatively small abundance. For SVs of eukaryotic algae, Chlorophyta, Cryptophyta, and Ochrophyta were widely distributed among the collected samples. In addition, there was a red colored bloom of eukaryotic alga, Geminigera cryophile (Cryptophyta), in the Langhovde coastal area. Eukaryotic SVs of Acutuncus antarcticus and/or Diphascon pingue of Tardigrada were dominant among most of the samples. Our data revealed the detailed structures of the algal communities in Langhovde and Skarvsnes. This will contribute to our understanding of Antarctic ecosystems and support further research into this subject. View Full-Text
Keywords: algae; Antarctica; lacustrine; hydro-terrestrial; Cyanobacteria; microbiome; Tardigrade algae; Antarctica; lacustrine; hydro-terrestrial; Cyanobacteria; microbiome; Tardigrade
►▼ Show Figures 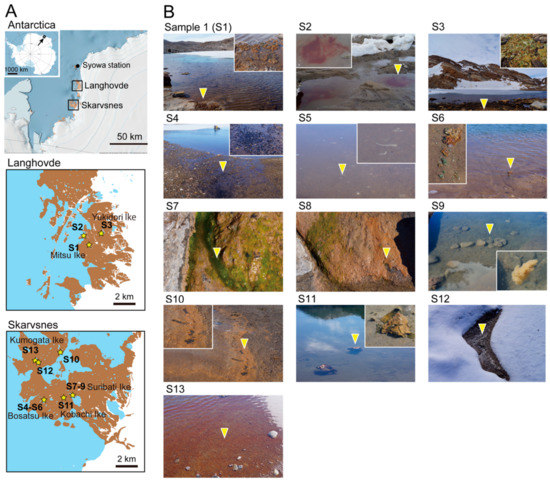