The interaction of a virus and its host’s immune system profoundly contributes to the phenomena of latency and reactivation of Herpesviridae. As HCMV reactivation in the mammary gland of lactating women is a highly frequent [1] and self-limited [2] process, analyzing the maternal immune response offers the possibility to observe locally restricted, virally induced immune reaction in a healthy immunocompetent host.
HCMV reactivation plays a major role in immunosuppressed recipients of hematopoietic stem cell or solid organ transplants via disseminated HCMV infection detected by viral DNAemia. In contrast, a locally restricted reactivation in the mammary gland occurs in nearly every healthy breastfeeding IgG-seropositive mother with HCMV shedding into milk in the absence of viral DNAemia [1]. Viral DNA load in milk whey (DNAlactia), which can be used to monitor viral shedding, mostly shows unimodal kinetics with an onset typically before day 10 postpartum [3]. Transmission via breast milk may lead to symptomatic HCMV infection in very preterm infants with a birth weight < 1500 g and a gestational age < 32 weeks [4].
Cytokines are polypeptides modulating innate and acquired immunity in networks by playing an important role in cell signaling and mediation of inflammatory responses [5]. In breast milk, cytokine levels typically show a high interindividual variability [6] and partly a decreasing tendency during the course of lactation [7,8]. Chemoattractants, anti-inflammatory cytokines, and other immunological components of breast milk may play a role in supporting the neonate’s immature immune system [9]. Whereas many factors influencing breast milk cytokines have been determined, [6,10,11,12] the impact of HCMV reactivation on cytokine profiles has not been demonstrated so far.
The exact mechanisms of viral reactivation in the mammary gland remain to be elucidated. In interstitial dendritic cells ex vivo, Interleukin-6 has been shown to be a potential key element for the reactivation of immediate early (IE) gene expression [13]. Additionally, other cytokines such as TNF-α seem to influence IE gene expression [14,15], which is necessary for initiation of the reactivation process.
In this study, we investigated differences in the longitudinal cytokine profile of HCMV IgG-seropositive and IgG-seronegative mothers’ milk whey to gain a first insight into the role of cytokines modulating the immune response to HCMV reactivation in the mammary gland.

Breast milk samples were obtained longitudinally from four IgG-seropositive and three IgG-seronegative breastfeeding mothers of preterm infants (Table 1) in four time ranges in weeks 2-3 (T1), 4-5 (T2), 6-7 (T3), and 8-9 (T4), postpartum. Five out of seven mothers (mothers 1-3, 6-7) were participants of the BlooMil study, whose defined time frames are published elsewhere [16]. For the quantification of CXCL10 concentrations in breast milk in an extended cohort, we reverted to the whole BlooMil study cohort, which included 18 seropositive and 10 seronegative breastfeeding mothers of mostly preterm infants at four time ranges after birth. The milk was processed as described earlier [16]. Fat- and cell-free milk whey, stored at -20°C for the measurement by proximity extension assay (PEA), and at -80°C for the measurement by enzyme-linked immunosorbent assay (ELISA), was used for analysis. Study samples were collected with written informed consent from all participating mothers, with approval of our institutional ethics committee (University Hospital Tuebingen: 804/2015BO2) and in accordance with the 1964 Helsinki declaration and its later amendments.

To investigate the levels of 92 inflammatory proteins, the Inflammation Panel of Olink Multiplex analysis service (Olink Proteomics, Uppsala, Sweden) was used.
The PEA method is based on the hybridization and extension of two complementary oligonucleotide sequences that are linked to different antibodies, each binding a specific region on the target protein. The results obtained by real-time PCR are given in normalized protein expression (NPX), a log2 scale unit calculated from normalized Ct (cycle threshold) values [17].

2.4. DNA Extraction and Determination of DNA Viral Load via qPCR

This study is a first approach to investigate the effect of HCMV reactivation during lactation on breast milk cytokines and to gain an insight into the role of cytokines modulating the immune response to the viral reactivation process in breast milk. According to our results, a series of CC- and CXC-chemokines, including those induced by Interferon gamma (IFN-γ), such as CXCL10, might be released during the viral reactivation process in the mammary gland, which suggests an increased Th1 cell response. Chemokines play an important role in leukocyte migration to inflammation sites [18]. Their presence in breast milk and their increased expression during HCMV reactivation suggest the attraction and traffic of leukocytes into the mammary gland as part of the immune response. In our ongoing BlooMil study, a study on the role of T cell subsets during HCMV reactivation in breast milk, we investigate the cellular immune profile in HCMV reactivation during lactation in a well characterized study cohort. Breast milk cells in general were identified as potential sources of breast milk cytokines, as they express mRNA for MCP-1, IL-8, TGFß1, TGFß2, M-CSF, IL-6, and IL-1ß [6]. Since leukocytes only represent < 2 % of the total cell population in mature breast milk [19], the potential influence of nonimmune cells on breast milk cytokines should be considered as well. The predominant cell populations in breast milk are myoepithelial and luminal cells [20] of which the latter may contribute to CXCL10 production in breast milk [21]. Within breast milk leukocytes, there is evidence for an HCMV-pp65 CD8+ T cell response in reactivating mothers [22]. Additionally, it has been shown that CD14+ monocytes/macrophages may be an HCMV target cell population during viral reactivation [23]. There are many open questions about the origin of altered cytokine levels, specifically in seropositive mothers’ breast milk; further gene expression studies are required.
Special attention should be drawn to the increasing TNFSF14 levels in IgG-seropositive mothers’ milk whey (Figure 2). TNFSF14 is a ligand to the TNFRSF14, which is also used by Herpes simplex virus glycoprotein D as an entry mediator (HVEM) [24]. The binding of TNFSF14 and HVEM induces a costimulatory signal to T cells; in contrast, the binding of HVEM to the B- and T-lymphocyte attenuator (BTLA) induces an inhibitory signal to T cells [25,26]. HCMV expresses UL144, an orthologue to HVEM, which selectively binds BTLA facilitating inhibitory modulation of T cell proliferation as a part of the viral immune evasion strategy [25]. TNFSF14 signaling may be one path leading to enhanced T cell activity.
The CXC-chemokine CXCL10 typically decreases in the course of lactation [21]. We observed similar kinetics, especially in seronegative mothers’ milk whey (Figure 3b). Overall, in contrast to the most frequently unimodal HCMV DNA viral load, CXCL10 concentrations in seropositive mothers’ milk whey showed highly diverse patterns, partly decreasing throughout lactation, partly unimodal (Figure 4a and Figure S3). As shown in Figure 4b, the CXCL10 secretion pattern might be similar between seronegative mothers and non-reactivating seropositive mothers. However, the incidence of seropositive but not HCMV reactivating mothers is below 5 % [1], and therefore we are not able to confirm this phenomenon in our study cohort.
Increased plasma levels of CXCL10 were reported in context of HCMV infection of lung transplant recipients [27]. Various transcription factors are activated when a virus–cell contact occurs [28]. The nuclear factor kB (NF-kB) has been shown to be stimulated following HCMV infection; on the other hand, the NF-kB is involved in major immediate-early promoter (MIEP) transactivation [29]. More than 150 genes might be activated through this transcription factor, including those encoding cytokines and chemokines like IL-8, CXCL10, and CXCL11 [30]. Significantly enhanced levels of these cytokines might be the in vivo counterpart of protein analysis in the secretome of lytically HCMV infected endothelial cells and/or fibroblasts in vitro demonstrating secretion of CXCL9, CXCL10, CXCL11, MCP-2, and IL-8, among other cytokines [31].
A symptomatic HCMV infection of very preterm infants may lead to severe sepsis-like symptoms, including bradycardia, apnea, neutropenia, and thrombocytopenia [3,4]. For the prevention of postnatal HCMV infection, viral infectivity of breast milk from mothers with infants at risk (birth weight < 1500 g; gestational age < 32 weeks) is eliminated by short-term heat inactivation procedure based on the generation of a milk film in the neonatology department of the University Children’s Hospital Tuebingen [32,33,34]. Therefore, mother-to-infant HCMV transmissions in context of cytokine concentrations could not be evaluated. However, an interesting open question is the influence of short-term heat inactivation or common Holder pasteurization on cytokines and other immunological and nutritional important components of breast milk.
Measuring cytokine concentrations in breast milk is challenging, since breast milk is a dynamic body fluid that undergoes changes in composition throughout lactation but also shows high interindividual variation [35]. Therefore, we consider the small sample size as an undeniable limitation of the presented study. Due to the benefits of mother’s own milk for the neonate and the often lower availability of breast milk in mothers of preterm infants, longitudinal sample acquisition in a neonatal intensive care unit is particularly demanding [34]. However, the strengths can be seen in the longitudinal study course, which allows one to observe individual kinetics. As the composition of breast milk cytokines may differ between mothers of term and preterm infants [36], our study results may be limited by gestational age at delivery.
For the first time, this study demonstrated the potential impact of HCMV reactivation on breast milk cytokine profiles of mothers with preterm infants. Another open question is if cytokine release is not only a reaction to the virus, but if cytokines could even be involved already in the onset of viral shedding. The hypothesis that inflammation processes might be linked to viral reactivation can be found in various reports [14,37]. Indeed, especially colostrum contains a variety of immunomodulatory agents [8]. The concentration of IL-6, for example, was shown to be higher in breast milk compared to serum [10]. Keeping in mind that IL-6 supported MIEP activation [13], elevated cytokine concentration in breast milk compared to blood of defined cytokines might even contribute to HCMV reactivation, resulting in increased shedding of HCMV into milk.

Conceptualization, K.H. and R.G.; investigation and methodology, K.L. and T.R.; formal analysis, data curation and visualization, T.R. and C.C.; supervision and project administration, K.H. and R.G.; resources, K.H.; writing—original draft preparation, T.R.; writing—review and editing, K.H., R.G., K.L., and C.C. All authors have read and agreed to the published version of the manuscript.

We would like to thank all participating mothers for their voluntary donation of breast milk and Lina Maria Serna Higuita (Institute for Clinical Epidemiology and Applied Biometry, University Hospital Tuebingen) for her statistical advice on the analysis of longitudinal CXCL10 concentrations.

The funders had no role in the design of the study; in the collection, analyses, or interpretation of data; in the writing of the manuscript; or in the decision to publish the results. C.C. is employed by Olink Proteomics, Uppsala, Sweden. 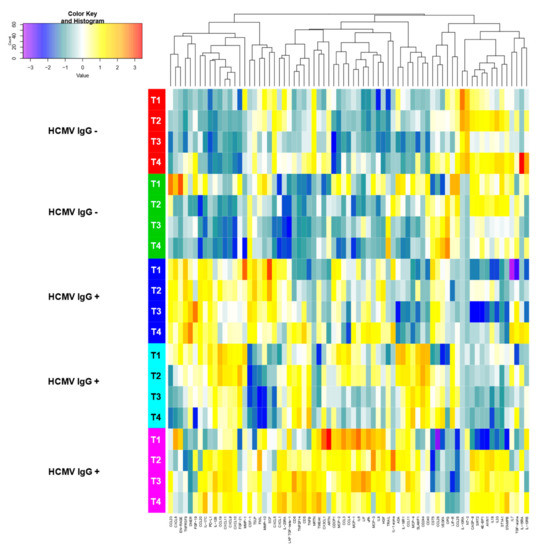