Antimicrobial and Fermentation Potential of Himanthalia elongata in Food Applications

Interactions between Magnaporthiopsis maydis and Macrophomina phaseolina, the Causes of Wilt Diseases in Maize and Cotton

Fungal pathogens are a significant threat to crops worldwide. The soil fungus, Magnaporthiopsis maydis, severely affects sensitive maize hybrids by causing the rapid wilting of plants at the maturity stage. Similarly, the soil fungus, Macrophomina phaseolina, develops in a variety of host plants, which leads to rot and plant mortality. The presence of both pathogens together in diseased cotton plants in Israel suggests possible interactions between them. Here, these relationships were tested in a series of experiments accompanied by real-time PCR tracking in maize and cotton. Despite the fact that neither of the pathogens was superior in a growth plate confrontation assay, their co-inoculum had a significant influence under field conditions. In maize sprouts and fully matured plants, infection by both pathogens (compared to inoculation with each of them alone) led to lesser amounts of M. maydis DNA but to increased amounts of M. phaseolina DNA levels. These results were obtained under a restricted water regime, while optimal water irrigation led to less pronounced differences. In water-stressed cotton sprouts, infection with both pathogens led to an increase in DNA amounts of each of the pathogens. Whereas the M. maydis DNA levels in the double infection remain high at the end of the season, a reduction in the amount of M. phaseolina DNA was observed. The double infection caused an increase in growth parameters in maize and cotton and decreased levels of dehydration in maize plants accompanied by an increase in yield production. Dehydration symptoms were minor in cotton under an optimal water supply. However, under a restricted water regime, the double infection abolished the harmful effect of M. phaseolina on the plants’ development and yield. These findings are the first report of interactions between these two pathogens in maize and cotton, and they encourage expanding the study to additional plant hosts and examining the potential involvement of other pathogens. View Full-Text
Keywords: Cephalosporium maydis; cotton; crop protection; fungus; Harpophora maydis; late wilt; maize; Macrophomina phaseolina; Magnaporthiopsis maydis; real-time PCR Cephalosporium maydis; cotton; crop protection; fungus; Harpophora maydis; late wilt; maize; Macrophomina phaseolina; Magnaporthiopsis maydis; real-time PCR
►▼ Show Figures 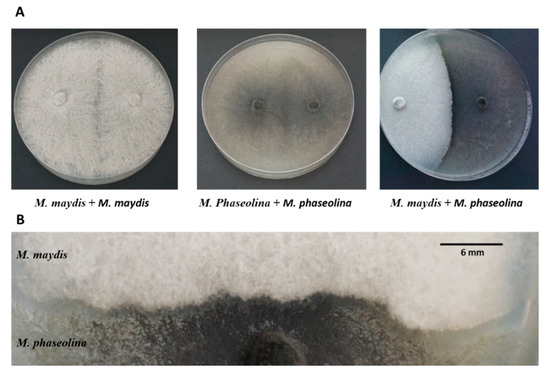