In this study, we evaluated the metabolic profile of the aerobic microorganism of Endomyces magnusii with a complete respiration chain and well-developed mitochondria system during long-lasting cultivation. The yeast was grown in batches using glycerol and glucose as the sole carbon source for a week. The profile included the cellular biological and chemical parameters, which determined the redox status of the yeast cells. We studied the activities of the antioxidant systems (catalases and superoxide dismutases), glutathione system enzymes (glutathione peroxidase and reductase), aconitase, as well as the main enzymes maintaining NADPH levels in the cells (glucose-6-phosphate dehydrogenase and NADP+-isocitrate dehydrogenase) during aging of Endomyces magnusii on two kinds of substrates. We also investigated the dynamics of change in oxidized and reduced glutathione, conjugated dienes, and reactive oxidative species in the cells at different growth stages, including the deep stationary stages. Our results revealed a similar trend in the changes in the activity of all the enzymes tested, which increased 2–4-fold upon aging. The yeast cytosol had a very high reduced glutathione content, 22 times than that of Saccharomyces cerevisiae, and remained unchanged during growth, whereas there was a 7.5-fold increase in the reduced glutathione-to-oxidized glutathione ratio. The much higher level of reactive oxidative species was observed in the cells in the late and deep stationary phases, especially in the cells using glycerol. Cell aging of the culture grown on glycerol, which promotes active oxidative phosphorylation in the mitochondria, facilitated the functioning of powerful antioxidant systems (catalases, superoxide dismutases, and glutathione system enzymes) induced by reactive oxidative species. Moreover, it stimulated NADPH synthesis, regulating the cytosolic reduced glutathione level, which in turn determines the redox potential of the yeast cell during the early aging process. View Full-Text
Keywords: Endomyces magnusii; mitochondria; glutathione system; yeast; antioxidant enzymes; reactive oxygen species; aging Endomyces magnusii; mitochondria; glutathione system; yeast; antioxidant enzymes; reactive oxygen species; aging
►▼ Show Figures 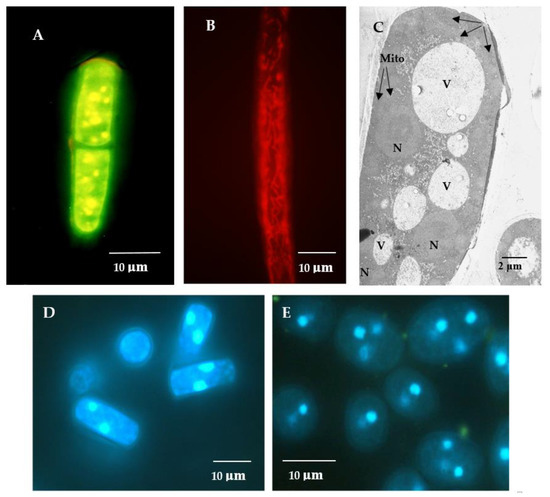