Separation, Characterization, and Handling of Microalgae by Dielectrophoresis
Previous Article in Journal

The Architecture of Monospecific Microalgae Biofilms

Microalgae biofilms have been proposed as an alternative to suspended cultures in commercial and biotechnological fields. However, little is known about their architecture that may strongly impact biofilm behavior, bioprocess stability, and productivity. In order to unravel the architecture of microalgae biofilms, four species of commercial interest were cultivated in microplates and characterized using a combination of confocal laser scanning microscopy and FTIR spectroscopy. In all the species, the biofilm biovolume and thickness increased over time and reached a plateau after seven days; however, the final biomass reached was very different. The roughness decreased during maturation, reflecting cell division and voids filling. The extracellular polymeric substances content of the matrix remained constant in some species, and increased over time in some others. Vertical profiles showed that young biofilms presented a maximum cell density at 20 μm above the substratum co-localized with matrix components. In mature biofilms, the maximum density of cells moved at a greater distance from the substratum (30–40 μm), whereas the maximum coverage of matrix components remained in a deeper layer. Carbohydrates and lipids were the main macromolecules changing during biofilm maturation. Our results revealed that the architecture of microalgae biofilms is species-specific. However, time similarly affects the structural and biochemical parameters. View Full-Text
Keywords: biofilm; microalgae; architecture; confocal laser scanning microscopy; FTIR spectroscopy biofilm; microalgae; architecture; confocal laser scanning microscopy; FTIR spectroscopy
►▼ Show Figures 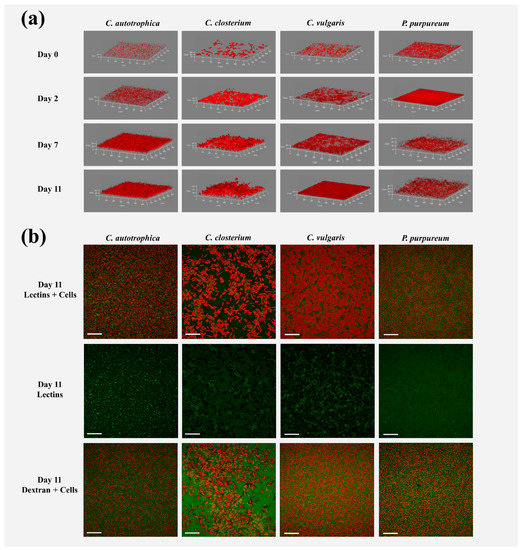