Nanomaterials as Delivery Vehicles and Components of New Strategies to Combat Bacterial Infections: Advantages and Limitations
Previous Article in Journal

Infections Due to Multidrug-Resistant Bacteria in Oncological Patients: Insights from a Five-Year Epidemiological and Clinical Analysis

Knowledge of mobile genetic elements that capture and disseminate antimicrobial resistance genes between diverse environments, particularly across human–animal boundaries, is key to understanding the role anthropogenic activities have in the evolution of antimicrobial resistance. Plasmids that circulate within the Enterobacteriaceae and the Proteobacteria more broadly are well placed to acquire resistance genes sourced from separate niche environments and provide a platform for smaller mobile elements such as IS26 to assemble these genes into large, complex genomic structures. Here, we characterised two atypical Z/I1 hybrid plasmids, pSTM32-108 and pSTM37-118, hosting antimicrobial resistance and virulence associated genes within endemic pathogen Salmonella enterica serovar Typhimurium 1,4,[5],12:i:-, sourced from Australian swine production facilities during 2013. We showed that the plasmids found in S. Typhimurium 1,4,[5],12:i:- are close relatives of two plasmids identified from Escherichia coli of human and bovine origin in Australia circa 1998. The older plasmids, pO26-CRL125 and pO111-CRL115, encoded a putative serine protease autotransporter and were host to a complex resistance region composed of a hybrid Tn21-Tn1721 mercury resistance transposon and composite IS26 transposon Tn6026. This gave a broad antimicrobial resistance profile keyed towards first generation antimicrobials used in Australian agriculture but also included a class 1 integron hosting the trimethoprim resistance gene dfrA5. Genes encoding resistance to ampicillin, trimethoprim, sulphonamides, streptomycin, aminoglycosides, tetracyclines and mercury were a feature of these plasmids. Phylogenetic analyses showed very little genetic drift in the sequences of these plasmids over the past 15 years; however, some alterations within the complex resistance regions present on each plasmid have led to the loss of various resistance genes, presumably as a result of the activity of IS26. These alterations may reflect the specific selective pressures placed on the host strains over time. Our studies suggest that these plasmids and variants of them are endemic in Australian food production systems. View Full-Text
Keywords: Salmonella; plasmid; antibiotic resistance; AMR; agriculture Salmonella; plasmid; antibiotic resistance; AMR; agriculture
►▼ Show Figures 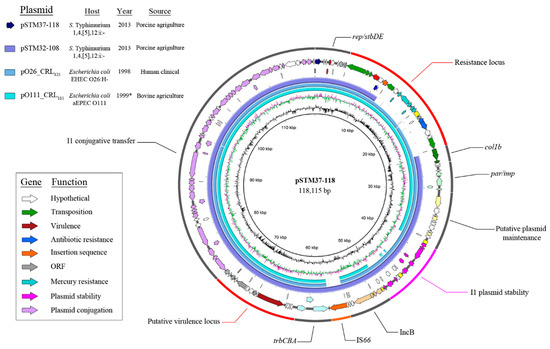