The profound mutualistic symbiosis between corals and their endosymbiotic counterparts, Symbiodiniaceae algae, has been threatened by the increase in seawater temperatures, leading to breakdown of the symbiotic relationship—coral bleaching. To characterize the heat-stress response of the holobiont, we generated vital apo-symbiotic Euphyllia paradivisa corals that lacked the endosymbiotic algae. Using RNA sequencing, we analyzed the gene expression of these apo-symbionts vs. symbiotic ones, to test the effect of the algal presence on the tolerance of the coral. We utilized literature-derived lists of “symbiosis differentially expressed genes” and “coral heat-stress genes” in order to compare between the treatments. The symbiotic and apo-symbiotic samples were segregated into two separate groups with several different enriched gene ontologies. Our findings suggest that the presence of endosymbionts has a greater negative impact on the host than the environmental temperature conditions experienced by the holobiont. The peak of the stress reaction was identified as 28 °C, with the highest number of differentially expressed genes. We suggest that the algal symbionts increase coral holobiont susceptibility to elevated temperatures. Currently, we can only speculate whether coral species, such as E. paradivisa, with the plasticity to also flourish as apo-symbionts, may have a greater chance to withstand the upcoming global climate change challenge. View Full-Text
Keywords: holobiont; heat-stress; algal symbiont; coral; Euphyllia paradivisa; apo-symbiont holobiont; heat-stress; algal symbiont; coral; Euphyllia paradivisa; apo-symbiont
►▼ Show Figures 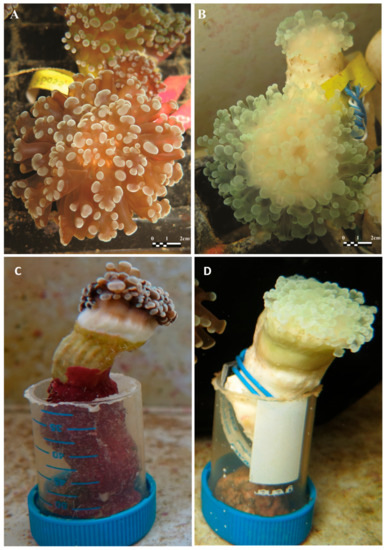