The Human Milk Microbiota is Modulated by Maternal Diet

Peracetic acid (PAA) in poultry processing is not necessarily the same from company to company. Anecdotal evidence suggests that PeraClean may be more stable compared to the competition; however, it is not known what impact potential differences in chemical stability may have. In order to evaluate the antimicrobial effects of PAA, one PAA (PeraClean, P) was qualitatively compared against two competitor products (Competitors 1 and 2, C1 and C2) at the University of Arkansas Pilot Processing Plant. A total of 150 Ross 708 broilers (42 d) were used in the current study. Briefly, prior to treatment, 10 birds were sampled post-evisceration (C). Then, one of four treatment groups per PAA were applied (A1, A2, B1, and B2). The birds were dipped in either 400 ppm or 600 ppm PAA (A or B), chilled in either 25 ppm or 45 ppm PAA (1 or 2), and then manually agitated in 400 mL of nBPW for 1 min. There were 10 birds per treatment group in total. The resulting rinsates were transported to the Center for Food Safety and assessed for total microbiological load with total aerobic plate counts (Trypticase Soy Agar; APC), coliforms, (Eosin Methylene Blue Media; EMB), Salmonella (Xylose Lysine Deoxycholate agar, XLD), and Campylobacter (modified Charcoal Cefoperazone Deoxycholate Agar, mCCDA). The microbiological plates were incubated as per manufacturer’s directions. Statistical analyses were calculated in JMP 14.0, with a significance level of p ≤ 0.05. Data indicate that all three sources of PAA are effective sanitizers for poultry processing applications compared within treatment. Qualitatively, there were differences in efficacy between the treatments. However, additional studies will be required to determine if those differences are quantitatively distinctive and if they are attributable to differences in product stability. View Full-Text
Keywords: Salmonella; Campylobacter; poultry processing; PAA Salmonella; Campylobacter; poultry processing; PAA
►▼ Show Figures 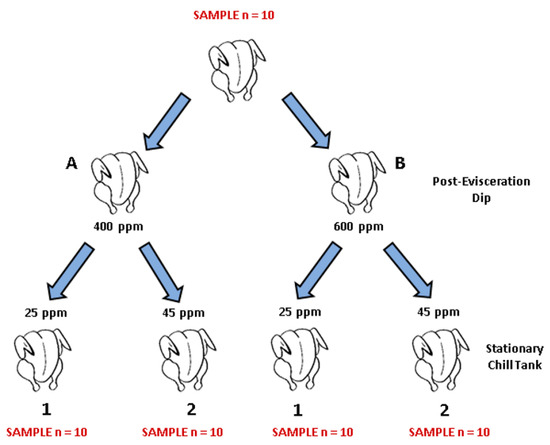