In the present paper, it was shown that adding small amounts (<20 wt.%) of diamond nanoparticle-based additive greatly improved the thermal properties of thermally-driven silicone/ethanol composite actuators. We found that adding 8 wt.% filler increased thermal conductivity from 0.190 W/mK to 0.212 W/mK without deteriorating mechanical properties, and increased its actuation speed and the number of operation cycles. We evaluated the multi-cyclic actuation behavior of the 8 wt.% filler material-actuator and observed an increase in actuation duration over time, which may be attributed to silicone matrix degradation and ethanol evaporation from the composite. The improved actuation speed and multi-cyclic actuation of the material-actuator with 8 wt.% filler allowed applying supervised machine learning for predicting time-series actuation cycle patterns based on initial small training dataset (temperature–force). We have shown, for the first time, a successful prediction of soft composite material-actuators’ behavior using the LSTM recurrent neural network. As a part of the future research, we intend to broaden the scope of high-thermal-conductivity fillers by employing advanced solutions, such as liquid metal particles, and perform comparative characterization on material structure as well as thermal and mechanical properties under exposure to multi-cyclic operation conditions. We also intend to work on predicting the random actuation behavior of silicone/ethanol material-actuators.

The soft material-actuator used in the present paper is based on the original silicone/ethanol composite described in [12]. The original silicone/ethanol composite has two components: a platinum-catalyzed two-part silicone rubber matrix (Ecoflex 00-35 Fast, Smooth-On, PA, USA) and ethanol (≥99.5%; Sigma Aldrich, MO, USA) as the active phase-change material. Each material-actuator specimen was equipped with double-coiled 30 AWG Ni-Cr alloy wire (Remington Industries, Johnsburg, IL, USA) for heat-induced actuation, and with a negative temperature coefficient (NTC) thermistor as an internal temperature sensor (Figure 4b). For the evaluation of mechanical properties and multi-cyclic testing, the material-actuator of a cylindrical shape was prepared (diameter of 25.4 mm, height 76.2 mm), and placed inside a braided mesh sleeving (diameter 25.4 mm, model: Techflex Flexo, Techflex, Sparta, NJ, USA). Prior to placing it in the sleeving, the material was lubricated using WD-40 (WD-40 Company, San Diego, CA, USA) to reduce friction (between the material and the braided sleeving). The material-actuator was prepared according to the following steps:
For improvement of the material-actuator’s thermal properties, MasterGel Maker Nano thermal compound (Cooler Master, Taiwan, China; thermal conductivity, according to the manufacturer: 11 W/mK) was added as a thermally conductive filler to the silicone/ethanol composite. Preparation of the material-actuator with enhanced thermal conductivity includes the same steps described above, except for a different procedure for step 1: prepare 40 vol.% Ecoflex 00-35 part-A, 40 vol.% Ecoflex 00-35 part-B and 20 vol.% ethanol. First, thoroughly mix the filler with Ecoflex 00-35 part-A, then mix with Ecoflex 00-35 part-B for 30 s. Specimens with 4, 8, 11, 14, 17 and 20 wt.% (1.3, 2.7, 3.8, 5, 6.2, 7.5 vol.%, accordingly) filler concentration were prepared and tested.

The mechanical properties of the material-actuator were tested using the Instron 5569A Table Mounted Materials Testing System (Instron, Norwood, MA, USA), equipped with the Instron BlueHill software (Instron, Norwood, MA, USA). Testing specimens were prepared according to the dimensions provided in the ASTM D-412 standard (Standard Test Methods for Vulcanized Rubber and Thermoplastic Elastomers-Tension) for the Die A dumbbell specimen. The prepared material was cast into molds, which were 3D-printed on a Stratasys J750 printer (Stratasys, Rehovot, Israel) using the Vero-Blue acrylic material. The cast silicone/ethanol material is assumed as isotropic. The tests were performed on four specimens for each test batch at a strain rate of 500 mm/min.

To test the actuation characteristics of the material-actuator, we produced a testing unit that automates the actuation (suitable for actuation resulting in either material compression or extension). Figure A1a shows the mechanical part of the testing unit. The 3D-printed housing of the testing unit is 20 cm in height. A Variense FSE1001 Digital and Miniature Uniaxial Force Sensor (Variense, Montreal, QC, Canada) with range ±250 N was attached at the base of the housing. A top (pink) moving plate slides vertically along the guide rails on the housing to allow for the material-actuator to move as it actuates. The material-actuator was attached to a set of 3D printed clamps at both ends. The clamps were connected to the moving plate and the force sensor, respectively.
Figure A1b shows the electronics of the testing unit. There are three ADS1115 analog-to-digital converters (Texas Instruments, Dallas, TX, USA) on the circuit board that measure the resistance of the two thermistors using Wheatstone bridges. One of the thermistors was located inside the muscle, and the other was exposed to the ambient environment. The ADS1115 communicated with a Photon microcontroller (Particle, San Francisco, CA, USA) at 100 Hz using the I2C protocol. A PWM controlled MOSFET module was connected to the material-actuator’s heating element. The controller communicated with a master computer via WiFi, where it accepted PWM commands from the computer and sent the temperature readout using Msgpack binary format at a speed of 60 Hz.
We developed a Unity3D graphics interface (GUI) on the master computer to monitor and automatically control the testing (shown in Figure A1c). The program monitored the temperature of the material-actuator, the ambient temperature, the PWM voltage input, and the force sensor output. The force sensor communicated directly with the Unity program at 175 Hz via a serial connection. Figure 4a summarizes the controlling scheme.

The process of setting up an automatic actuation testing was as follows: First, set an upper bound force , a lower bound force , and a PWM voltage. For each cycle, the material-actuator was actuated until it produced a force , then the actuation was terminated, and the material-actuator was passively cooled down in open air until the force output reached the level . The cyclic actuation experiment continued until the expiration criteria were triggered, where either the actuator temperature exceeded a predefined maximum temperature (145 °C), or the heating time exceeded twice the initial cycle duration, which is an indicator of ethanol evaporation and the usability of the material-actuator.

This research was supported by the Israel Ministry of Defense (IMOD) Grant number 4440729085 for Soft Robotics. A. Miriyev acknowledges support from Columbia University funds (by August 2018).

The authors are thankful to Shanyu Zhao of Empa (Swiss Federal Laboratories for Materials Science and Technology) for the kind assistance with thermal properties assessment and fruitful discussions. 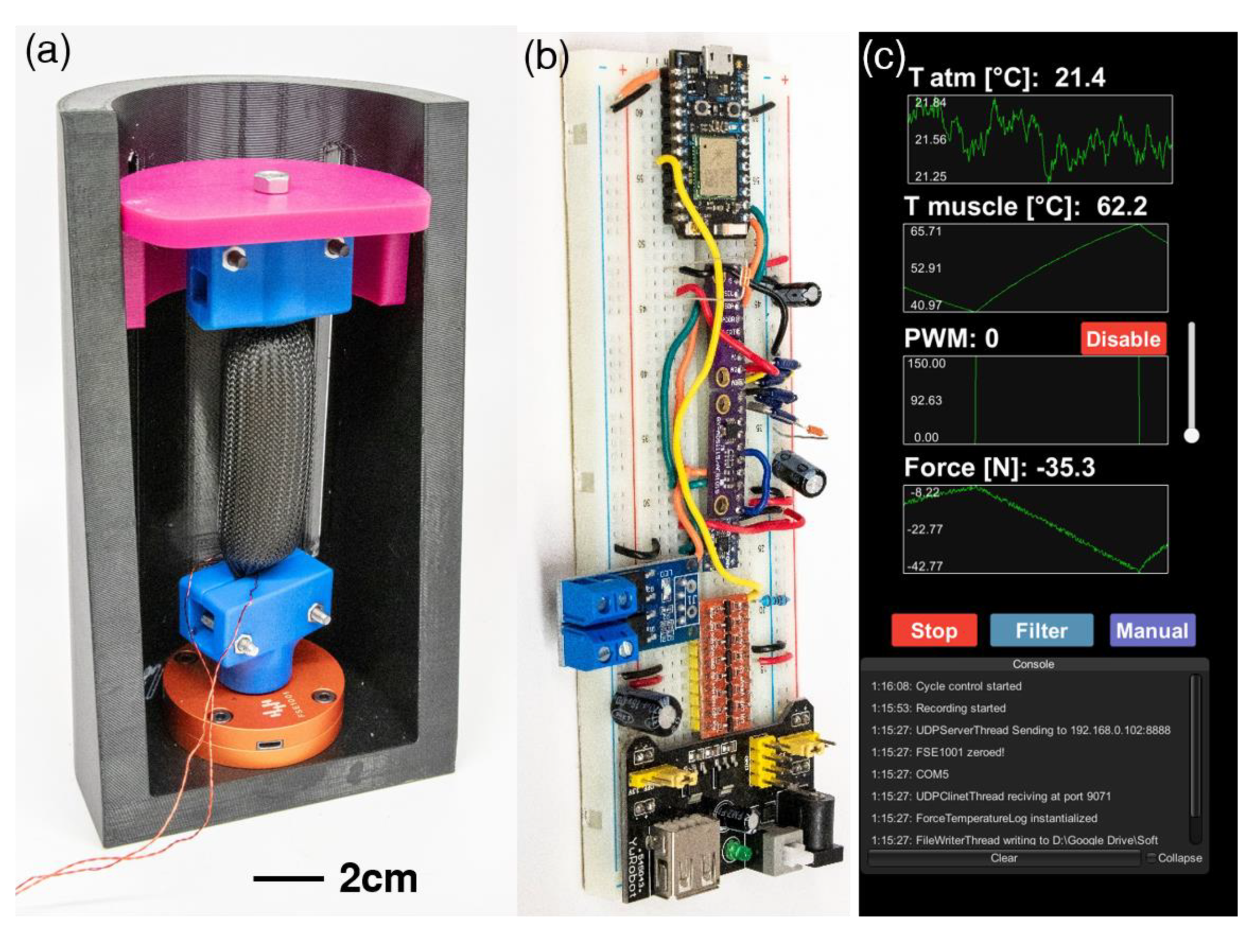 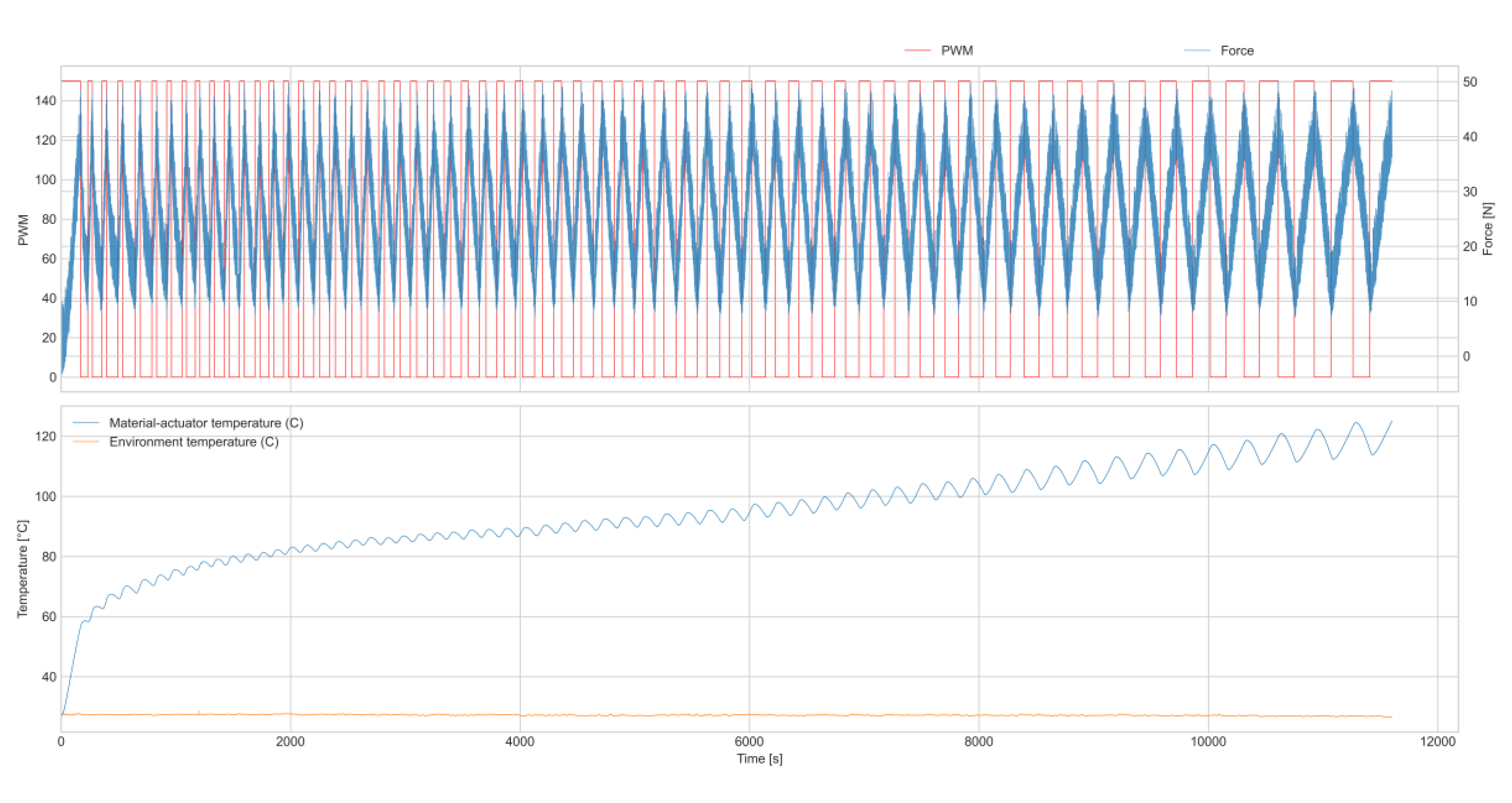 For the prediction task, we evaluated the correlation between the time-series data using the autocorrelation function (ACF). Autocorrelation measures the correlation of a time-series signal with a lagged copy of itself. The dataset was augmented with a smoothed force variable using a simple rolling average over a 2.5-seconds window and the autocorrelation of the time-series raw force signal was analyzed. For force observations at times , the ACF with k step lag behind is given by where (X) is the expectation of X. The analysis showed high ACF between consecutive time-lagged observations (Figure A4), meaning that a time-series approach using machine learning methods may accurately predict the force characteristic of the material-actuator, given previous force and temperature signals. 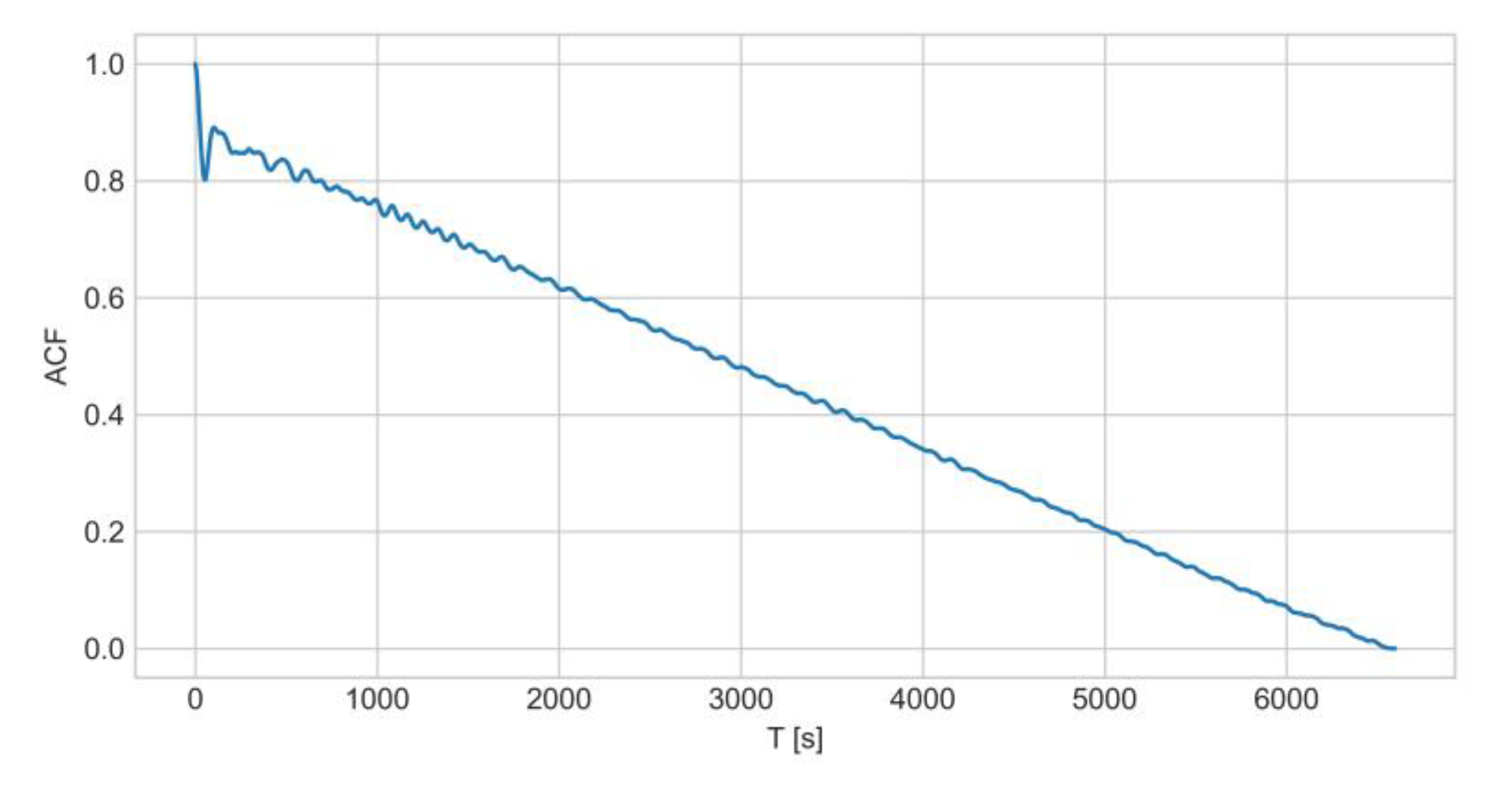 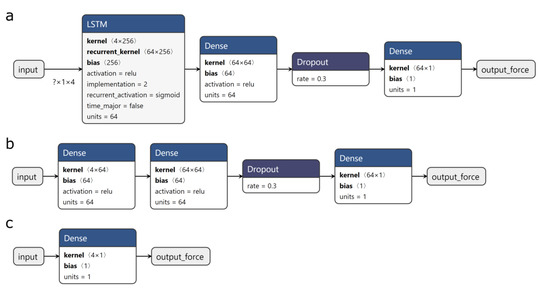 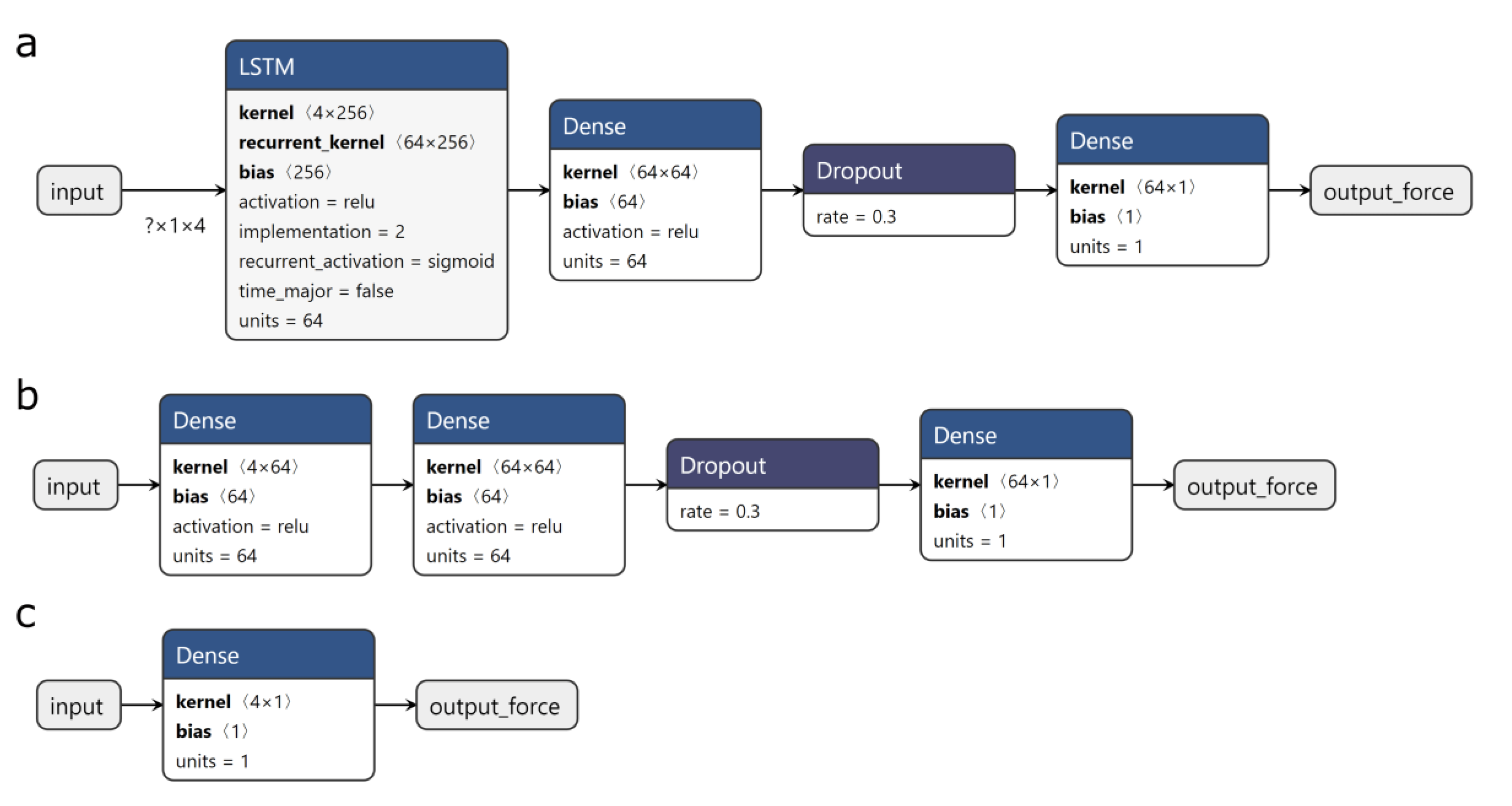 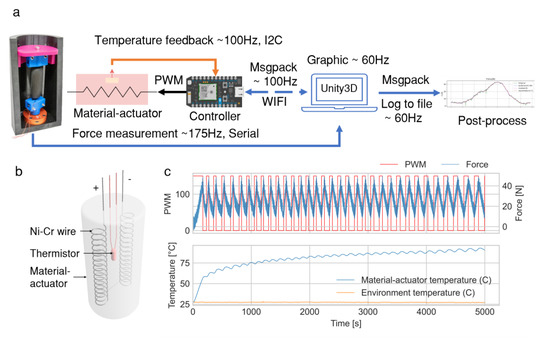 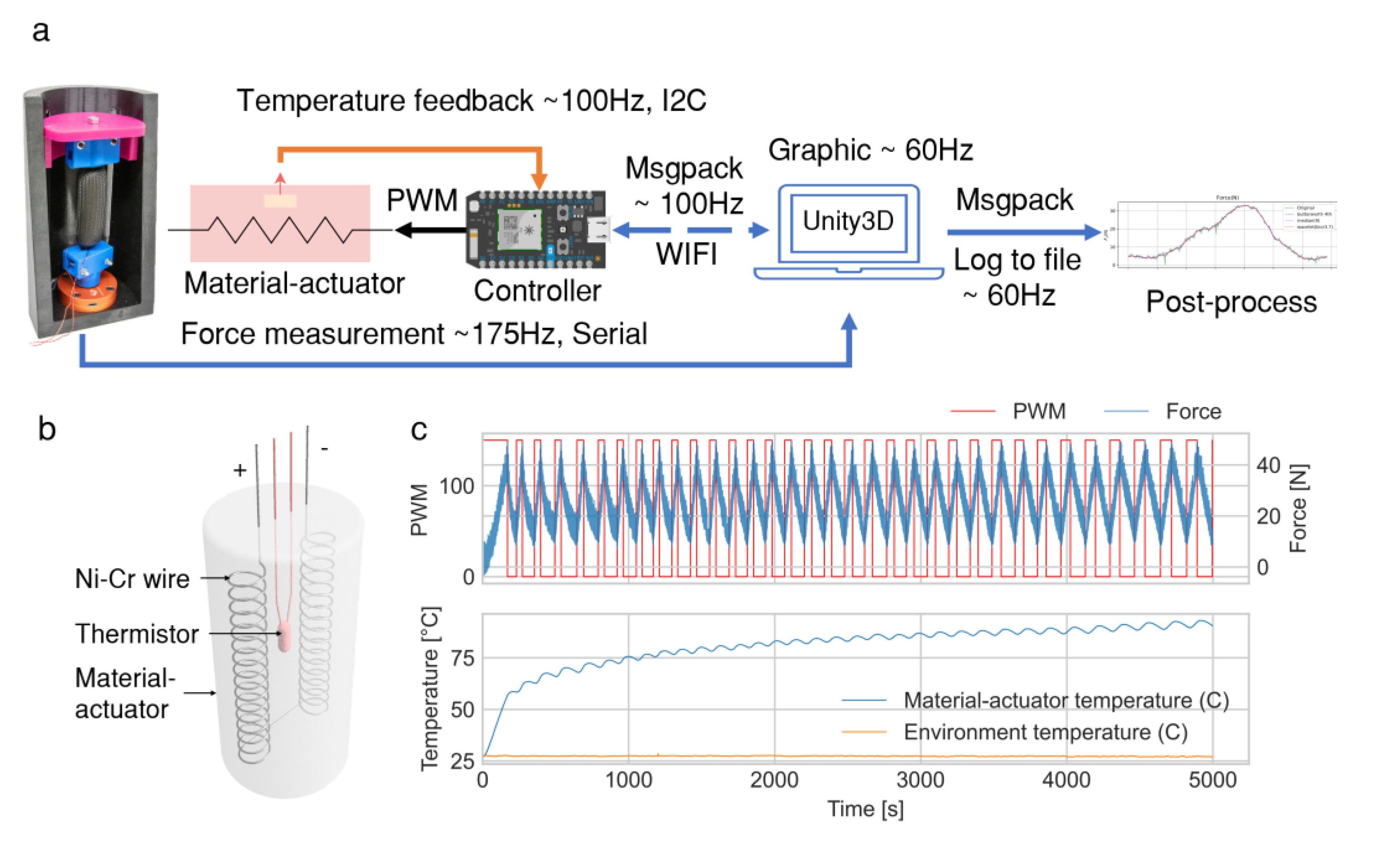 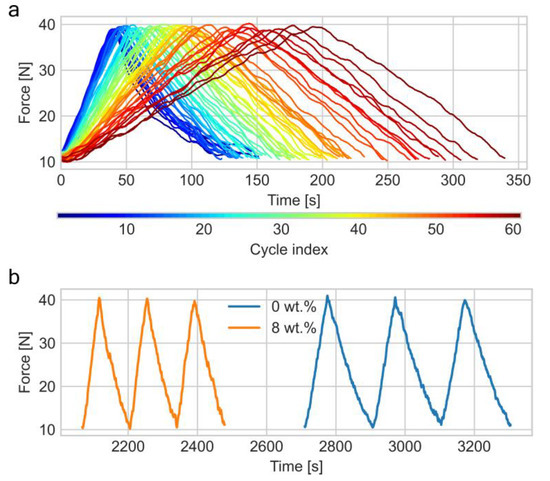 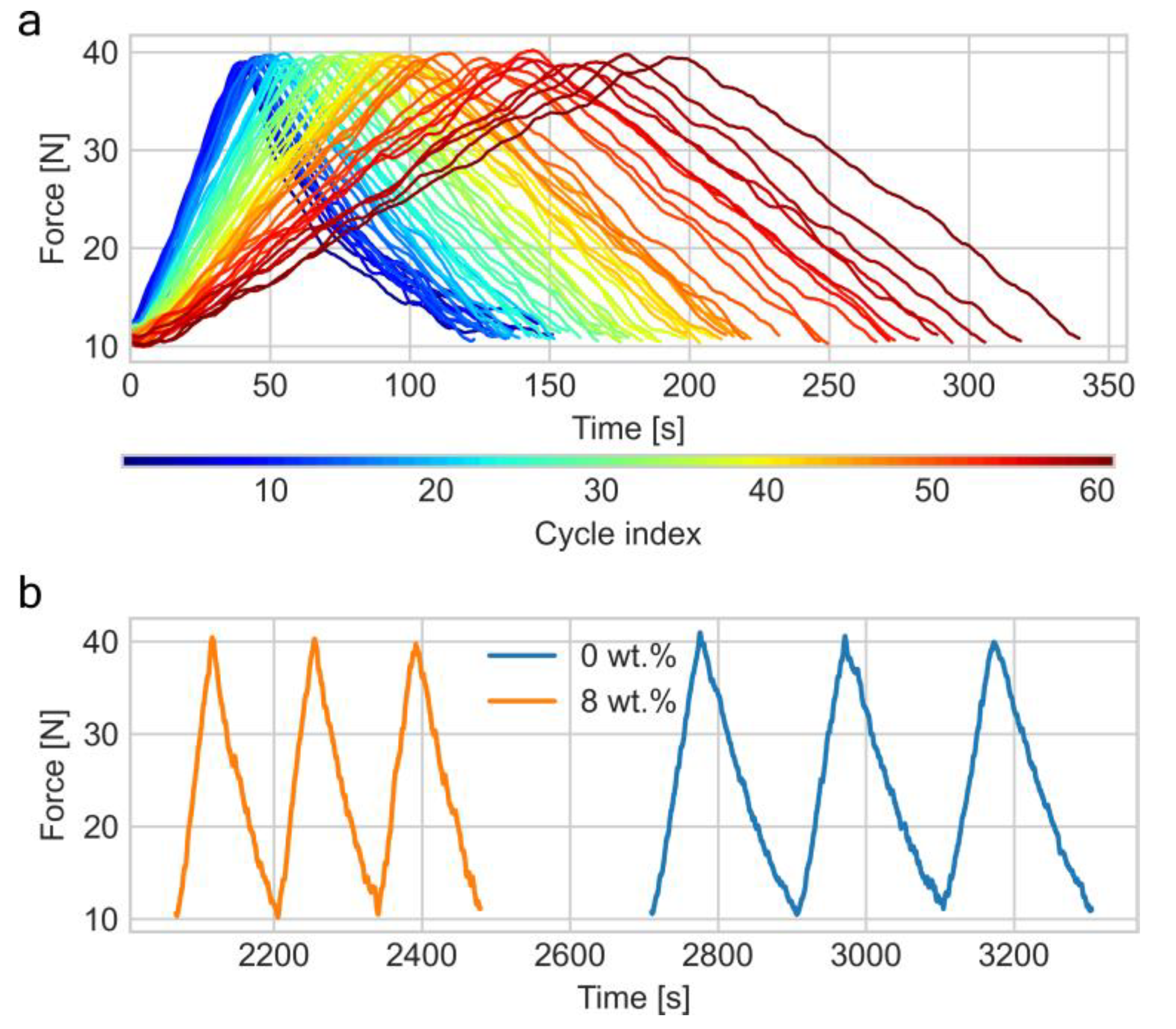