Presentation, Modeling and Experiments of an Electrostatic Actuator Based Catom for Programmable Matter
Previous Article in Journal

In mobile devices, the screen size limits conveyance of immersive experiences; haptic feedback coupled with visual feedback is expected to have a better effect to maximize the level of immersion. Therefore, this paper presents a miniature tunable haptic stylus based on magnetorheological (MR) fluids to provide kinesthetic information to users. The designed stylus has a force generation, force transmission, and housing part; moreover, in the stylus, all three operating modes of MR fluids contribute to the haptic actuation to produce a wide range of resistive force generated by MR fluids in a limited size, thereby providing a variety of pressing sensations to users. A universal testing machine was constructed to evaluate haptic performance of the proposed haptic stylus, whose resistive force was measured with the constructed setup as a function of pressed depth and input current, and by varying the pressed depth and pressing speed. Under maximum input voltage, the stylus generates a wide range of resistive force from 2.33 N to 27.47 N, whereas under maximum pressed depth it varied from 1.08 N to 27.47 N with a corresponding change in voltage input from 0 V to 3.3 V. Therefore, the proposed haptic stylus can create varied haptic sensations.
Keywords: miniature stiffness display; MR fluids; haptic; multiple mode miniature stiffness display; MR fluids; haptic; multiple mode

Because of advancements in mobile hardware technology, interaction with mobile virtual objects has become increasingly popular with most users owning a smart phone. Mobile virtual reality includes a variety of graphical content from a simple static object to one having complex dynamic behavior. A user who manipulates and interacts with these objects wants to haptically ”feel” not only the presence of objects but also their material properties. As the demand for realistic interaction with virtual objects increases, the importance of haptic technology also increases to ensure that the ultimate level of immersion is conveyed to users.
Haptic sensation consists of kinesthetic and tactile feelings. A kinesthetic feeling refers to sensory data obtained through receptors of joints, muscles, ligaments, etc. The tactile feeling is a cutaneous sensation obtained from receptors of the skin. A user recognizes the stiffness of an object through kinesthetic information and discerns the texture of an object through tactile information. Thus, to convey a more realistic haptic sensation to users in a virtual environment, both tactile and kinesthetic information should be simultaneously presented to users.
Recently, many mobile devices have used styluses to help users tap on the screen and allow them to delicately manipulate virtual contents. In virtual reality, while visual information is the most dominant sensory input for perceiving virtual objects, haptic information coupled with visual information increases the sense of reality. Therefore, many researchers have focused on tactile modules that stimulate the skin of users [1,2,3,4,5,6,7]. Lee et al., developed a haptic pen using a touch sensor and solenoid coil to create a sense of contact with virtual objects [1]. Kyung and Park presented a pen-like haptic interface, which consists of a compact pin-array tactile module and a vibrating module (Ubi-Pen), and verified its haptic performance [2,3]. Liao et al., developed a pen-type haptic interface device and evaluated its usefulness [4]. Cho et al., presented a haptic stylus to generate auditory-tactile feedback that provides realism in handwriting or drawing tasks [5]. Wang et al., suggested an electro-vibration based haptic pen which can create continuous tactile feedback [6]. Arasan et al., developed a vibrotactile pen for generating two haptic effects (static and dynamic vibration) and conveying them to users [7]. Although these pens can haptically simulate the roughness of a target object and can emulate button sensation using vibration, it is not easy to represent the stiffness of the virtual object through tactile feedback.
Many researchers have shown interest in incorporating kinesthetic effects in haptic styluses. Kamuro et al., suggested a pen-type hand held haptic interface conveying kinesthetic feeling to users [8]. Tian et al., proposed a haptic stylus which creates kinesthetic and tactile sensations [9]. Kianzad and MacLean developed a magic pen that generates kinesthetic sensation using a ball-point drive mechanism [10]. Kara and Patoglu suggested a haptic stylus having variable tip compliance [11]. Even though these haptic styluses directly provide kinesthetic information (for example, force or distributed pressure), actuation mechanisms are too bulky and heavy to be inserted into tiny styluses.
Therefore, the magnetorheological fluid (MR fluid), whose mechanical properties can be changed according to an external magnetic field, has been studied as a material for pen-type haptic devices to convey kinesthetic sensation to users [12,13]. MR fluids based haptic pen was developed to interact with an image on a mobile terminal [12]. Another haptic pen for creating kinesthetic sensation using a hybrid actuator (MR actuator with a voice coil motor) was introduced [13]. They used two modes (a flow mode and a shear mode) of the available three operating modes of MR fluids to increase haptic resistive force. Although their research works greatly help users to understand the material property of virtual objects by using kinesthetic information, the range of haptic force can be further expanded if the squeeze mode is added to the haptic pen. The reason being that squeeze mode has the greatest effect on the generation of resistive force among these three operating modes in MR fluids [14,15,16,17,18]. In this paper, we propose a new design of tiny haptic stylus, in which all three modes (a shear mode, flow mode, and squeeze mode) of MR fluids can contribute to the haptic actuation, to increase the magnitude of haptic force to the level where users are truly “satisfied” in a small size. The proposed tiny haptic stylus is expected to be useful for interaction with virtual objects because of its simple structure and haptic performance.

2. Design of A New Kinesthetic Stylus

2.3. Optimization of the Haptic Stylus

2.4. Fabrication of the Tiny Haptic Stylus

3. Experiment of the Tiny Haptic Stylus

This work was supported by Priority Research Centers Program through the National Research Foundation of Korea (NRF) funded by the Ministry of Education, Science and Technology (NRF-2018R1A6A1A03025526). The study was also supported by the Technology Innovation Program (10077367, Development of a film-type transparent /stretchable 3D touch sensor haptic actuator combined module and advanced UI/UX) funded by the Ministry of Trade, Industry, and Energy (MOTIE, Sejong, Korea). 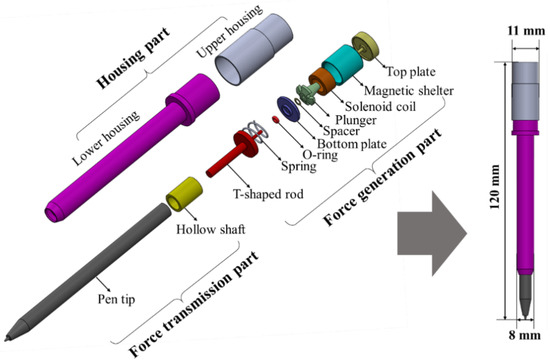 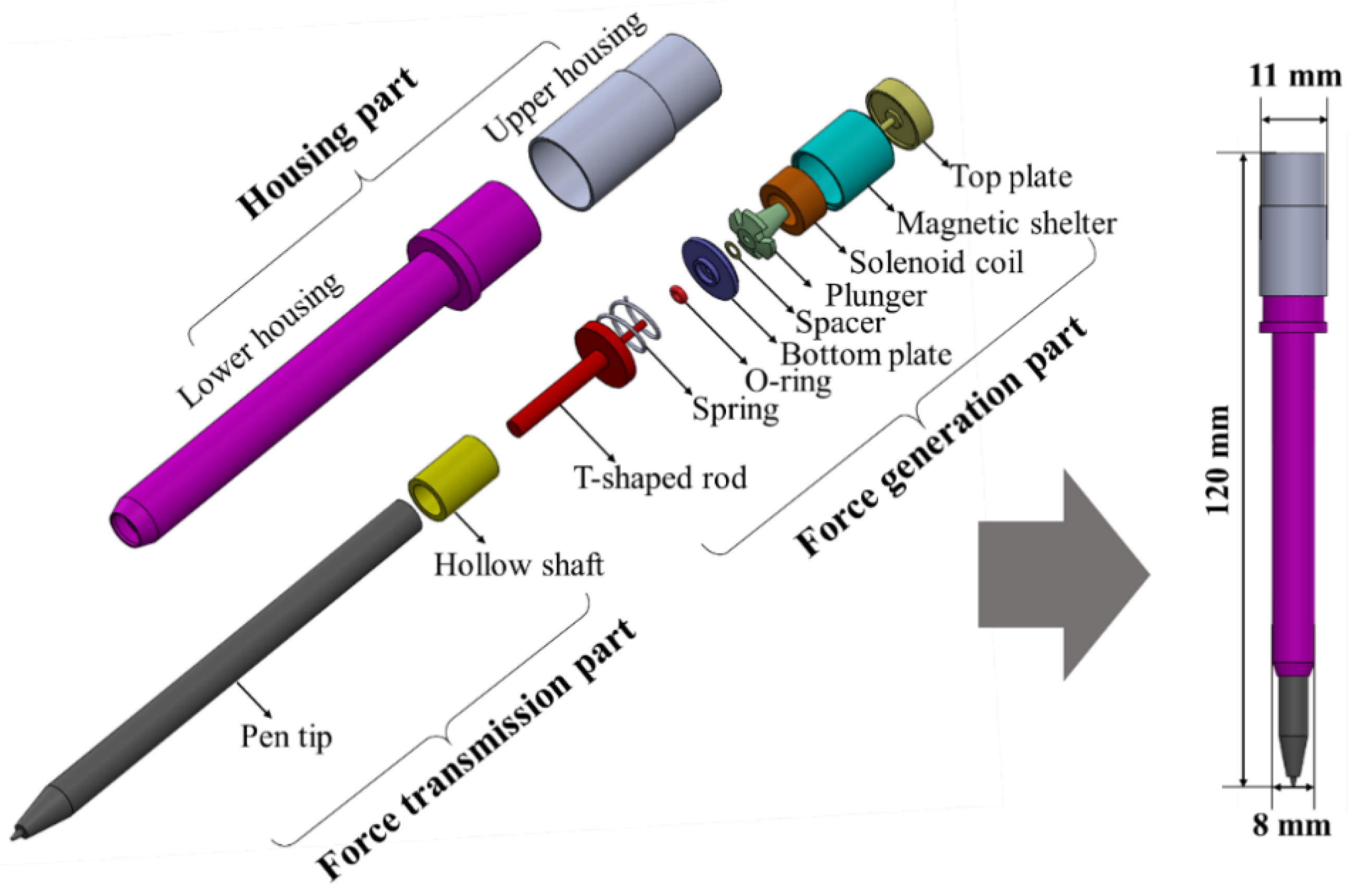 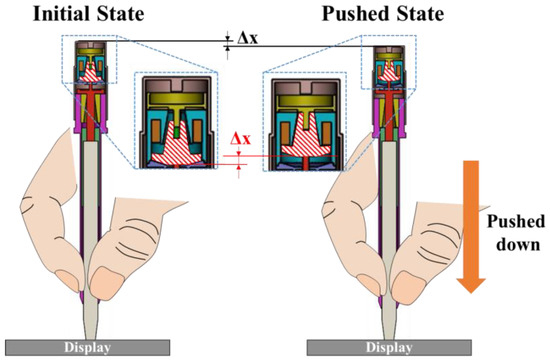 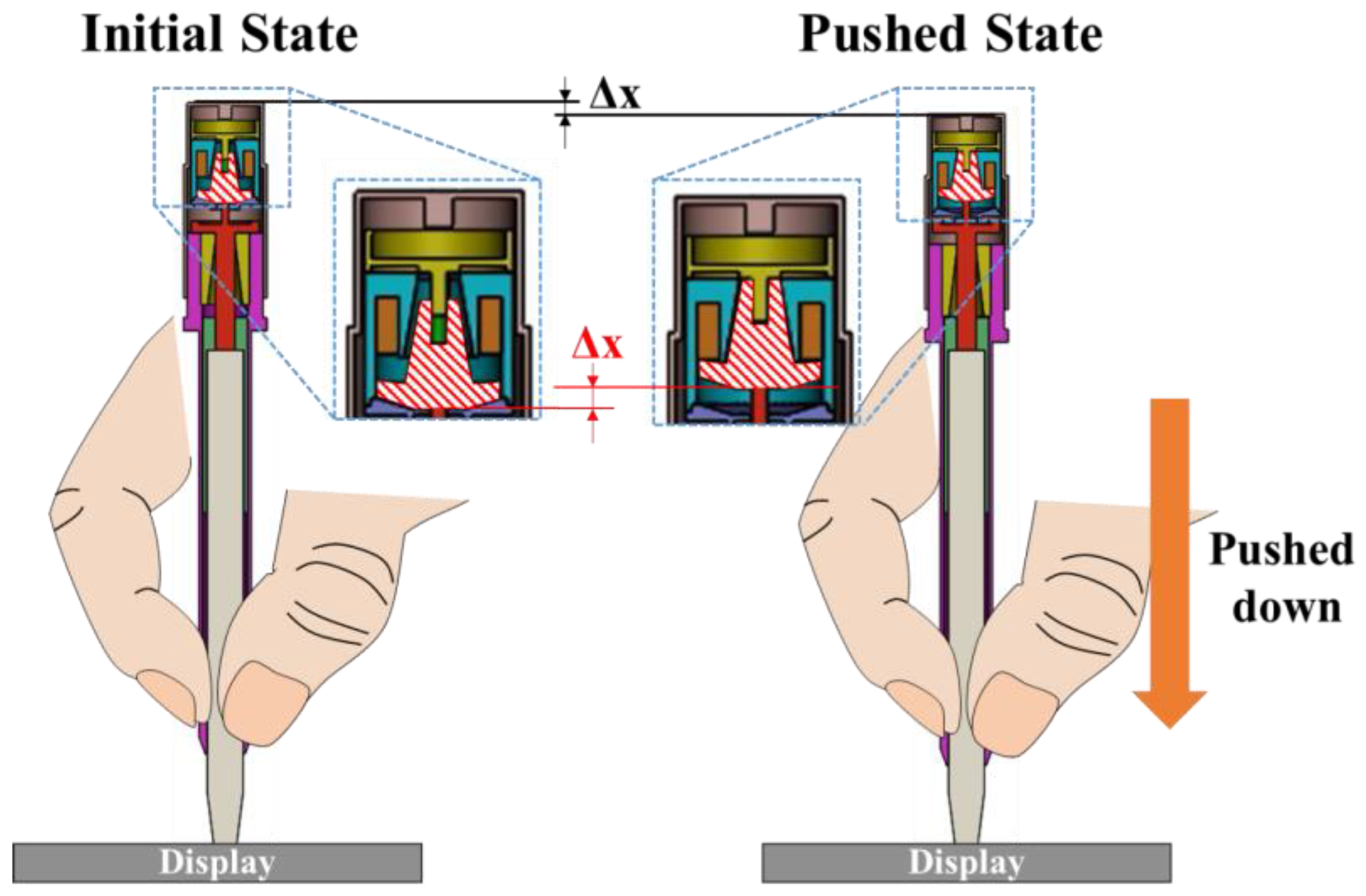 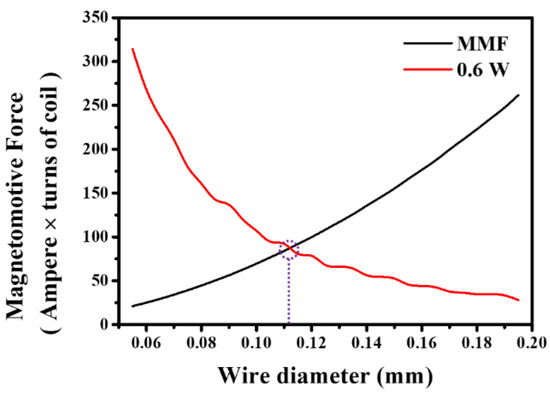 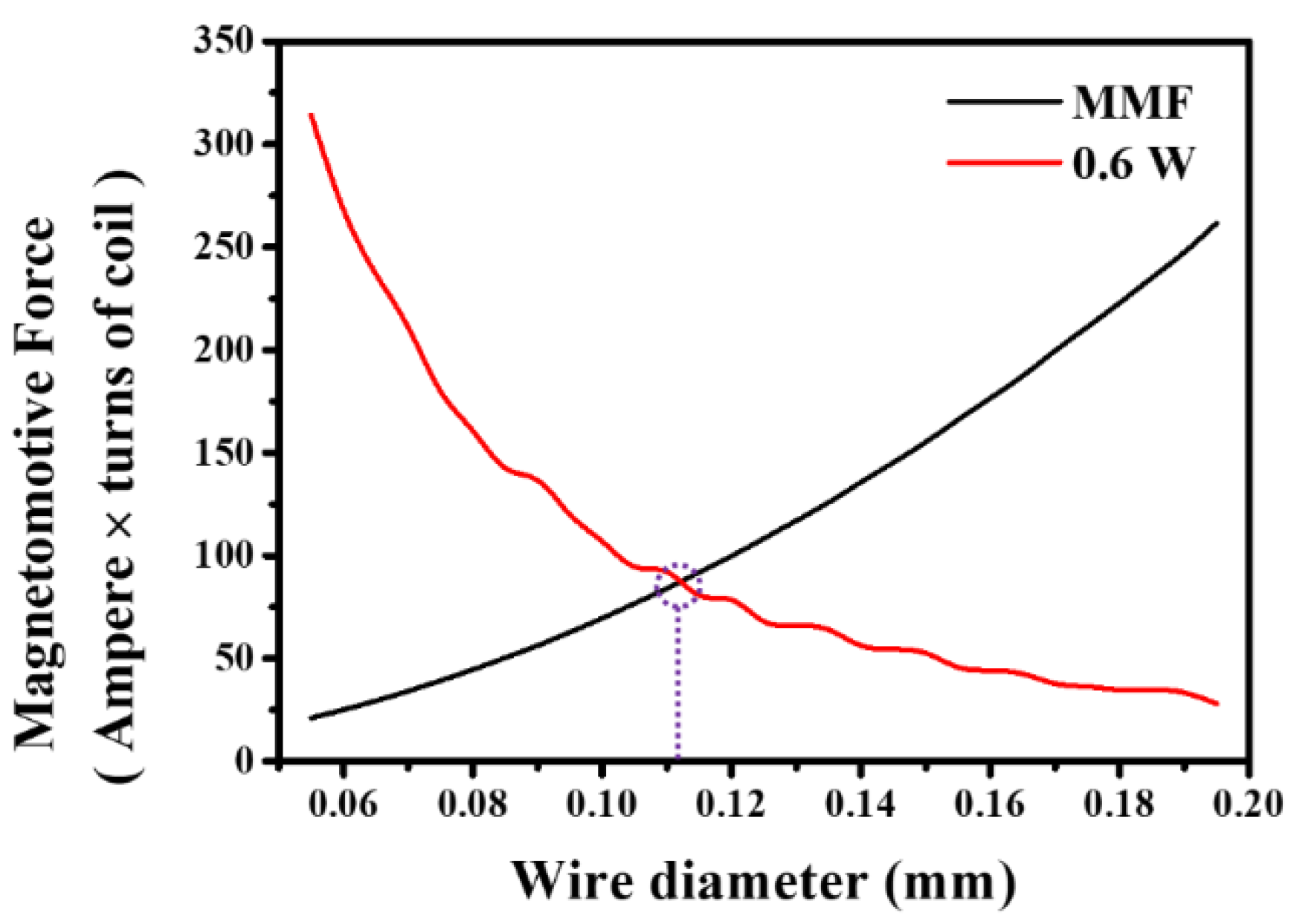 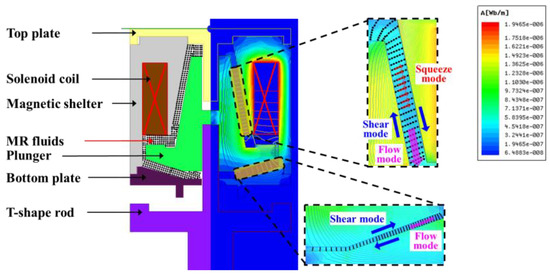 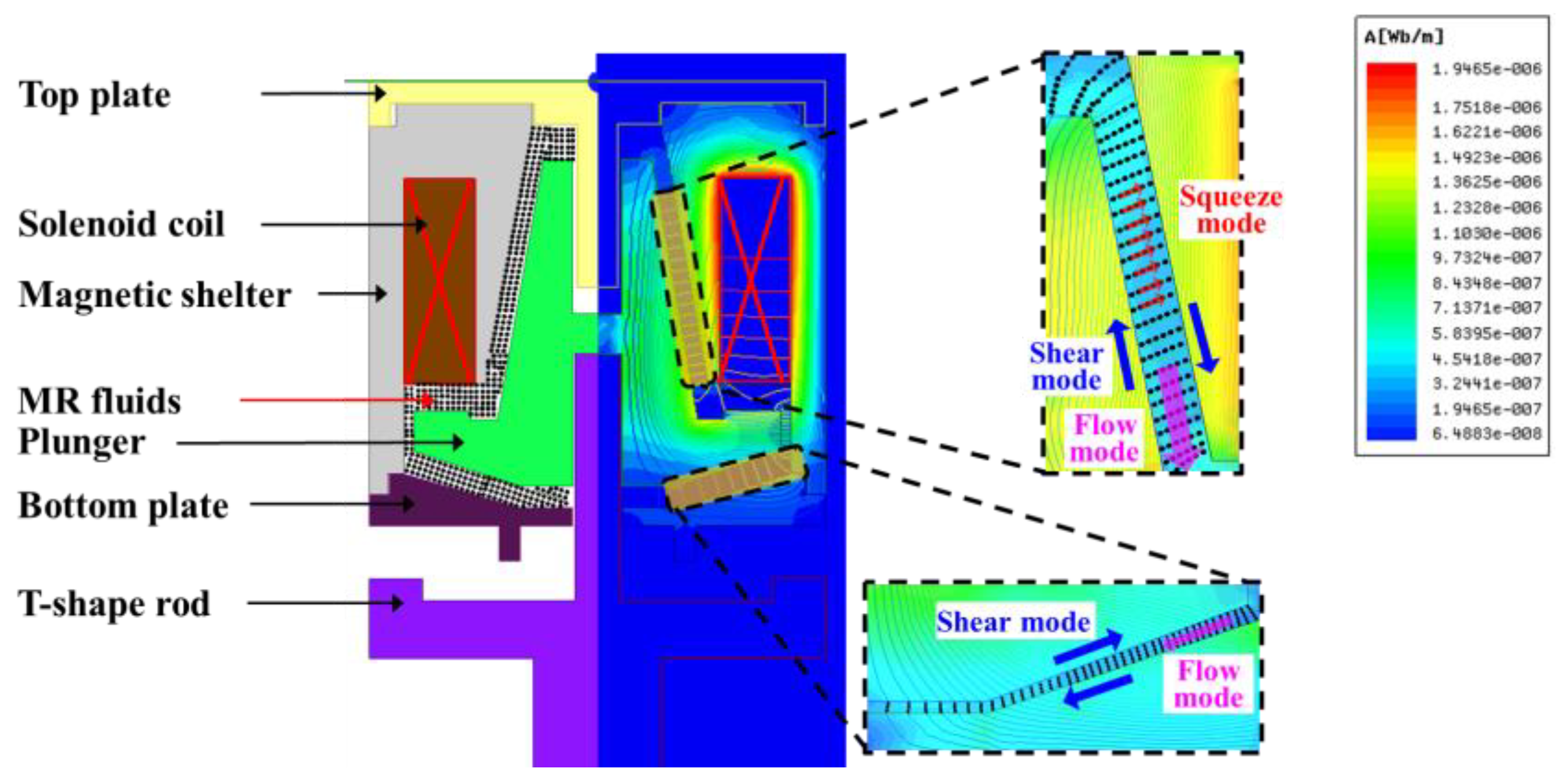 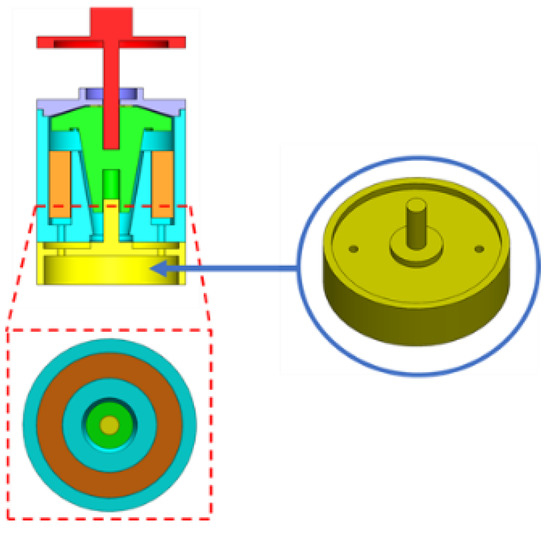 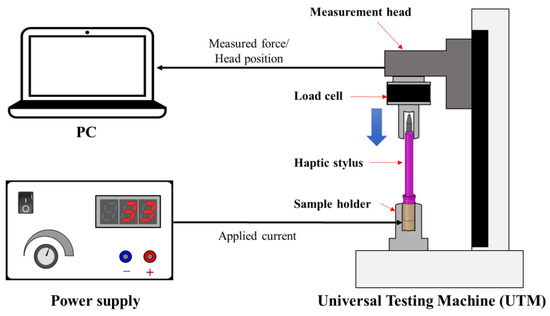 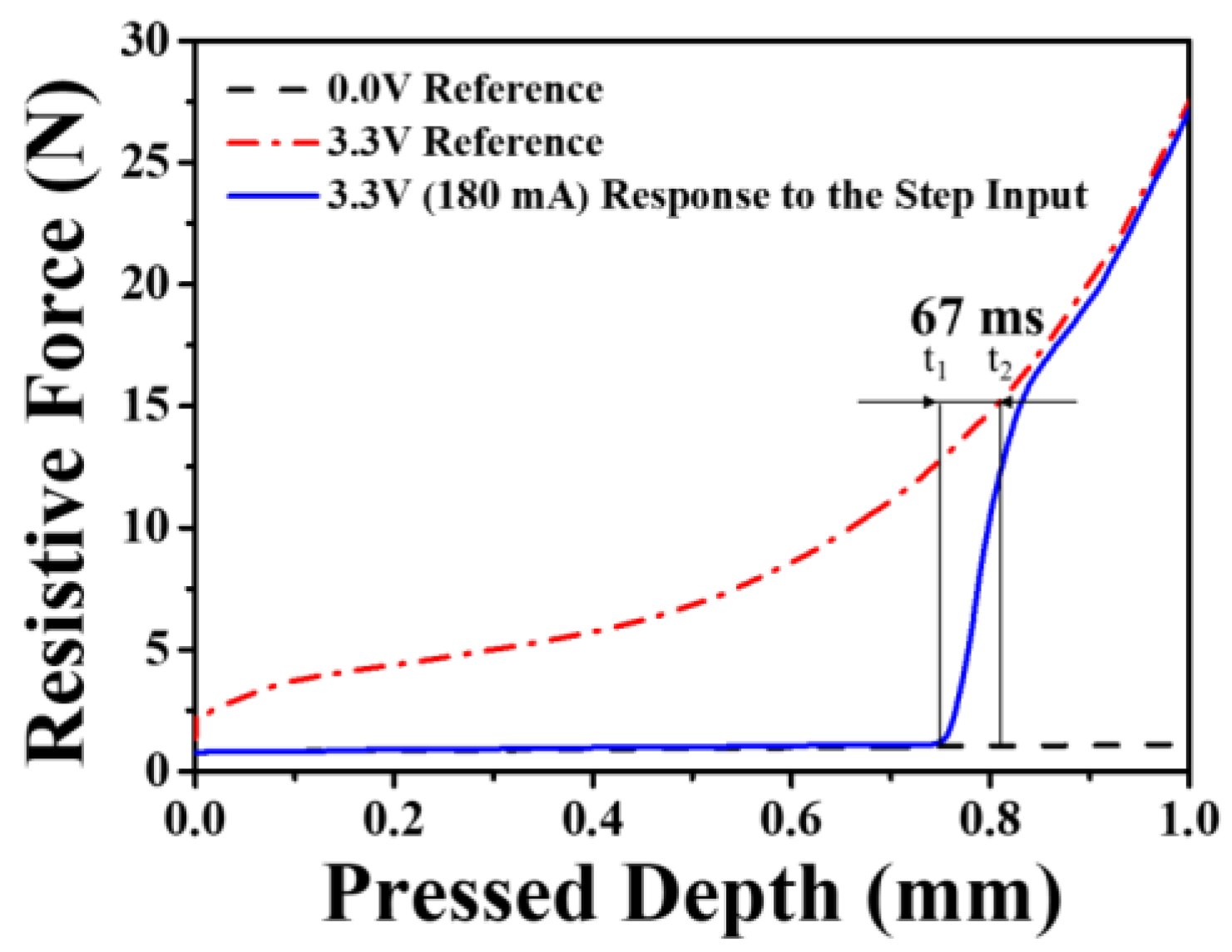