:
We propose a simple methodology to paint carbon nanotube (CNT) powder with a soft brush onto an elastomer. A large deformation of dielectric elastomer actuator (DEA) occurs according to the small constraint of the electrodes. Uniform painting with a soft brush leads to a stable deformation, as demonstrated by the results of multiple trials. Unexpectedly, painting with a soft brush results in aligned materials on the elastomer. The oriented materials demonstrate anisotropic mechanical and electronic properties. This simple methodology should help realize innovative DEA applications.
Keywords:
additive manufacturing; dielectric elastomer actuator; brush painting

Figure 2a shows a soft brush employed in experiments. The soft brush consists of aligned high-density hairs with a 150-μm diameter and a Young modulus of 10.53 GPa. The hairs buckle when painting on the staffs, providing a uniform force onto the substrate. Changing the painting direction can control the force vector. This simple method enhances and manages the driving property, expanding the potential of DEA applications. There were two types of elastomers: acrylic and silicone. Generally, DEAs with acrylic elastomers show a high deformation and a slow transient, whereas DEAs with silicone elastomers show a small deformation and a fast-transient speed. Which elastomer to choose depends on the applications. Figure 2b shows schematic of the DEA pattern electrode process. Teflon sheet was employed as a masking sheet to design circular CNT electrodes.
We summarize materials and methods employed for experiments in Table 1. We employed an acrylic elastomer (VHB Y-4905J, 3M, Maplewood, MN, USA) and a silicone elastomer (ELASTOSIL FILM 2030 SHEET, WACKER, Munich, German). The acrylic elastomer has a feature in configuration. The elastomer is used as an adhesive tape, and sandwiched by adhesive layers. The existence of the adhesive layers highly affects to results. We applied CNT (multi-walled carbon nanotube 724769, Sigma-Aldrich, Saint Louis, MO, USA) to the elastomers by hand and the brush. For painting by hand, we employed tissue paper to transfer the CNT powder. We put certain amount of the powder to the tissue paper, and apply the powder to the elastomer by hand. The tools used for the painting is shown in the last line of Table 1.

Firstly, we conducted observation experiments to investigate the conditions of the electrode on the elastomers. We brushed CNT powders in one direction onto surface of the elastomers which are pre-stretched. We pre-stretched all the acrylic DEAs demonstrated in the paper for 300% using an aluminum frame on all sides. The silicone DEA was pre-stretched 50% using the same method.
We took images with a camera and a Scanning Electron Microscopy (SEM) (VE9800, Keyence, Osaka, Japan). For the images taken with the camera, we analyzed with a gray scale histogram of the image. Pixels corresponded to each color of the gray scale were counted by an image analysis software (Image J). We employed a white background to observe transparency of the electrode. We evaluated the electrode from two factors, which were intensity of peak in the histogram and value of gray scale which has the largest value. Uniformity of the electrode was investigated from the intensity of peak in the histogram. Transparency was examined from the value of gray scale which has the largest value. For the images taken with the SEM, we analyzed distribution of the orientation using image analysis software based on fast Fourier transfer [26]. As a control experiment, we applied the brush to the acrylic elastomer without CNT. Then, we stroked the brush on the acrylic elastomer for 120 times to confirm whether existence of the CNT was required for the orientation.

Secondly, we investigated the performance of DEAs. We conducted three experiments to compare performance of the DEA of which electrodes painted by hand and the brush. (1) We measured transient response of the DEAs. We applied a voltage of 2 kV for 3000 s to the DEAs listed in Table 1. (2) We compared static strain of the DEAs. A voltage between 0.5 kV and 2 kV was applied to the acrylic elastomer of which the electrodes were painted by hand or with the brush. We measured the radial strain 3000 s after applying the voltage. (3) Stability of the actuation was also investigated. We attempted the experiment to measure the static strain five times with applied a voltage of 2 kV, and took average and error of the attempts to examine the reproductivity. The radial strains were measured by the image analysis software (Image J) in the three experiments. We employed an amplifier (HEOPT-20B10, Matsusada Precision Inc., Shiga, Japan) to apply high voltage for the actuator.
Finally, we conducted experiments to observe the effect of oriented CNTs on the mechanical and electrical properties of DEA. As mentioned in the introduction, anisotropy is one of notable features of CNTs. Anisotropy can be induced by painting with the brush in one direction. A 300% pre-stretched acrylic elastomer was coated by CNT with brushing in one direction. A square electrode with 7 cm sides was employed to observe the anisotropic property. We applied voltage of 2 kV to the DEA for 3000 s. The center of each side was captured with the image analysis software to obtain lateral strain. We also measured the anisotropic resistance of electrodes. A 5-cm square electrode was prepared, and the resistances were measured parallel and perpendicular to direction of the orientation direction.

Figure 7 shows static driving states of an acrylic DEA painted with the soft brush. Figure 7a,b show reference and driving states respectively. The CNT electrodes stretch circularly as shown in the figures. Figure 8 shows dynamic response of the DEAs. The acrylic elastomer painted with the brush shows the largest radial strain (52%), which can be the rephrased area strain of 133% with applied a voltage of 2 kV. Painting the electrode with the brush provides a 13.7% larger strain than painting by hand in case of the acrylic elastomer. The silicone elastomer shows a fast-transient response compared to the acrylic elastomer. Radial strain of 5.5% is obtained on the silicone elastomer painted with the brush.
Figure 9 shows trends in radial strains as a function of an applied voltage. The powder electrodes hardly restrict deformation of the elastomer, resulting in a larger deformation of the actuator. The larger deformation leads to deformation with a low voltage. To develop a DEA driven with the low voltage, selecting the property of the electrodes can be an alternative to fabricate thinner dielectric elastomers. For any applied voltages from 0.5 kV to 2 kV, the DEA painted with the brush exhibits better performance than that painted by hand. Applying a larger voltage (e.g., 2.5 kV) causes the DEAs to be broken down, and prevents to measure the static strain.
One of the advantages of the painting methods is reproducibility. We hypothesize that painting with the brush leads to stable actuation of the DEAs since uniform patterning of the electrodes realizes a uniform strain. Figure 10 shows the average radial strain of the DEAs over five trials. The error bars show the maximum and the minimum values. Differences of 11% and 6% in the error are obtained from the DEAs painted by hand and with the brush, respectively. Thus, painting DEAs with the soft brush results in larger displacement and higher reproducibility.
Figure 11 shows time transient of lateral strains perpendicular and parallel to the oriented direction of CNT. The DEA with the square electrode demonstrates anisotropic deformation. The deformation of the DEA perpendicular to the direction of the orientation shows larger strain than that in the parallel direction by 5.9% at 3000 s after applying the voltage. The deformation of the longer direction is restrained due to the high van der Waals force of CNTs. The resistances measured perpendicular and parallel to the orientation were confirmed as 2.58 MΩ and 5.56 MΩ, respectively. The resistance measured perpendicularly showed less value than the one with parallel by 46%. After applying a voltage of 1 kV to induce deformation, the resistances changed to 5.87 MΩ (perpendicular) and 4.72 MΩ (parallel), respectively. The change of the resistance would be caused by stretching of the elastomer due to the actuation and electric field generated by applying the voltage.

In summary, we propose the simple methodology to paint CNT powder with the soft brush onto the elastomer. A large deformation of DEA for the radial strain of 52% occurs according to small constraint of the electrodes. Uniform painting with the soft brush leads to stable deformation, as demonstrated by the experiments with five trials. Unexpectedly, painting with the soft brush results in aligned material on the acrylic elastomer. The orientation occurs due to the adhesive layer sandwiching the layer of the acrylic elastomer. The adhesive nature interacts with materials to aggregate in one direction. The oriented CNTs show anisotropic mechanical and electronic properties. The lateral strain enlarges by 5.9% and the resistance decreased by 46% due to the orientation. Comparing with painting by hand, painting by the brush increases safeness of a human. A risk to interact the hazardous material decreases by using the brush. This simple methodology should help realize innovative DEA applications.

This research was supported in part by JSPS KAKENHI under Grant JP16J07902, JP16K14202, 16H04291, and 17K18858. This work is funded by Research Institute for Science and Engineering, Waseda University, and Shibaura Institute of Technology. 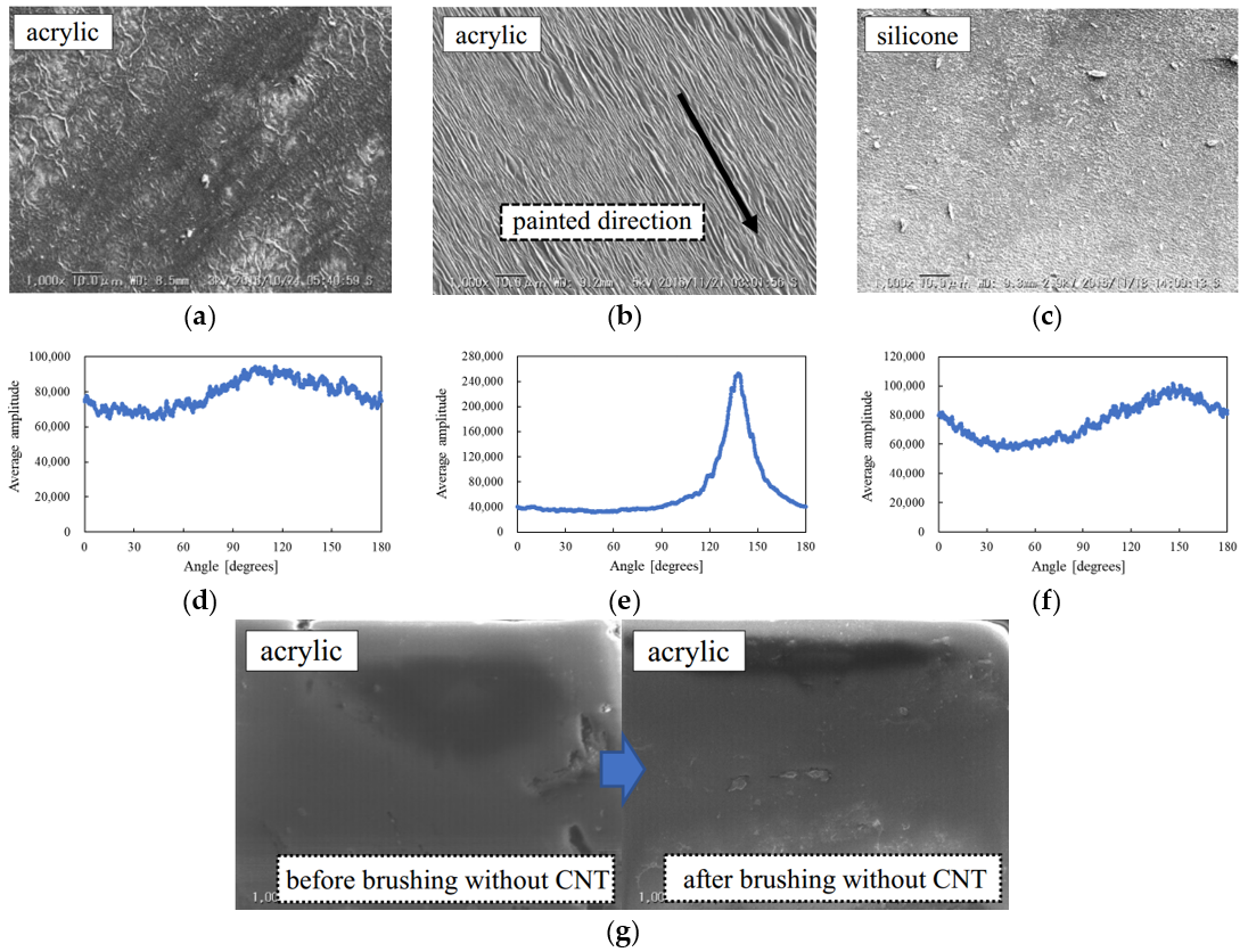 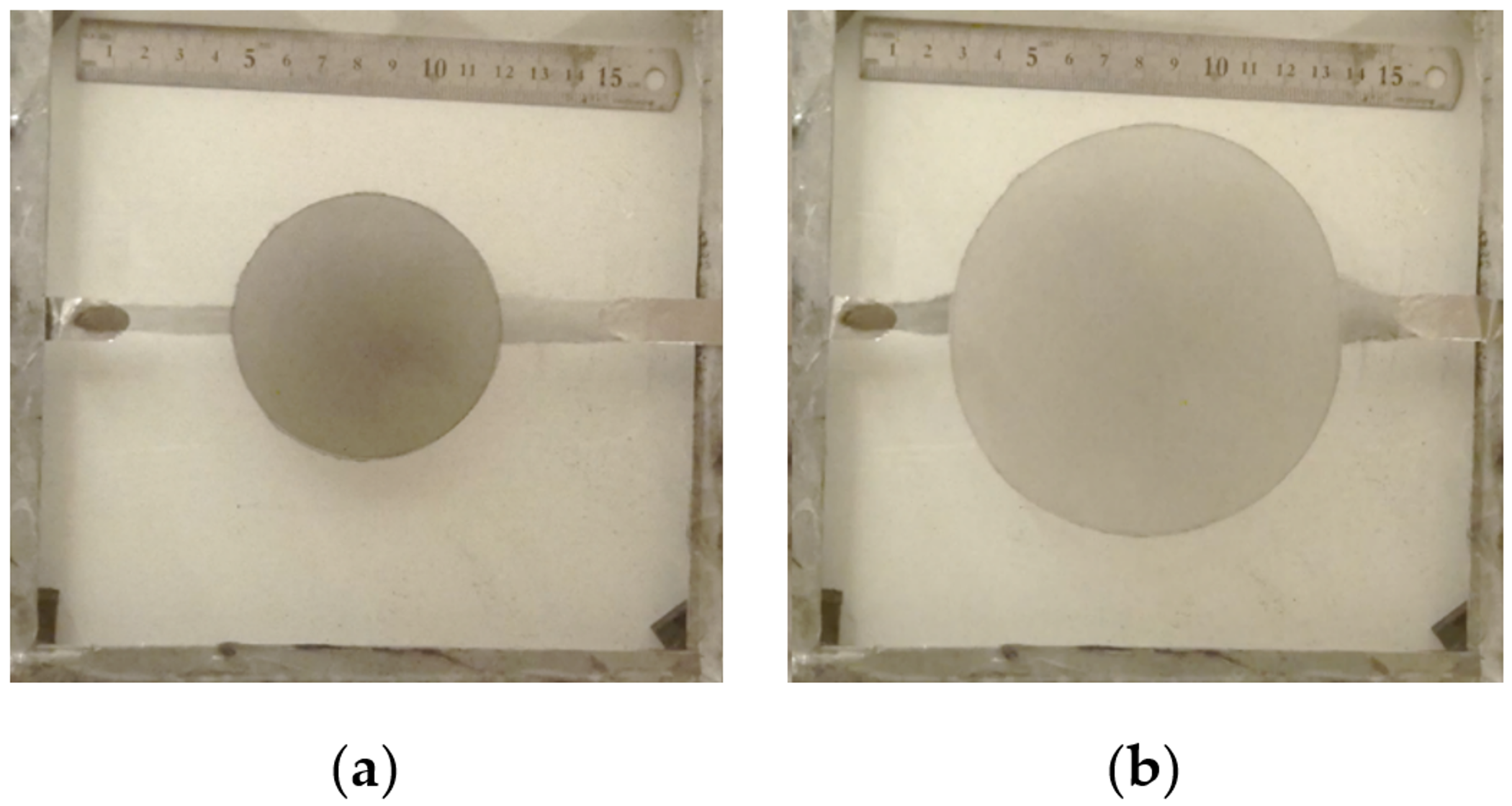 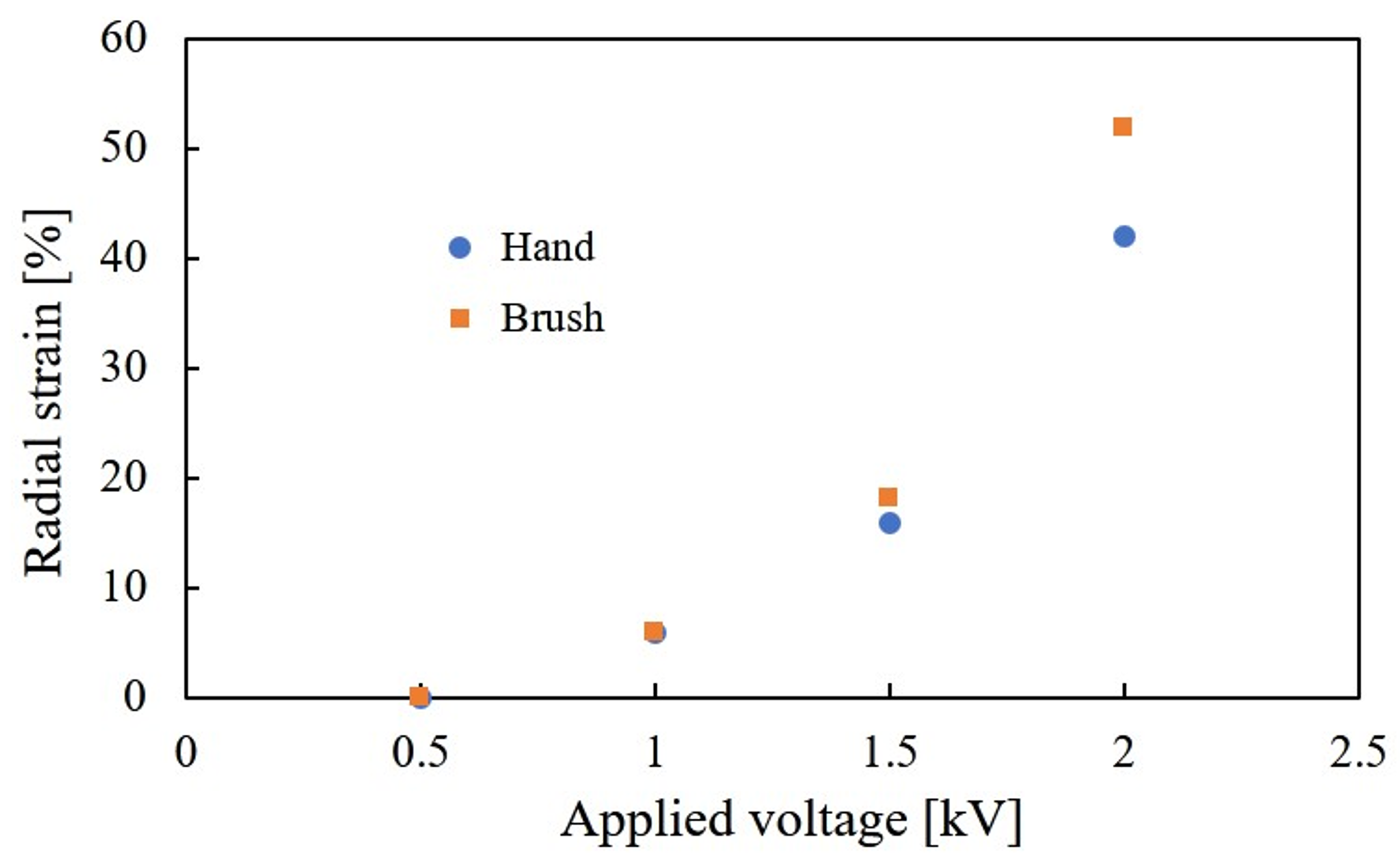 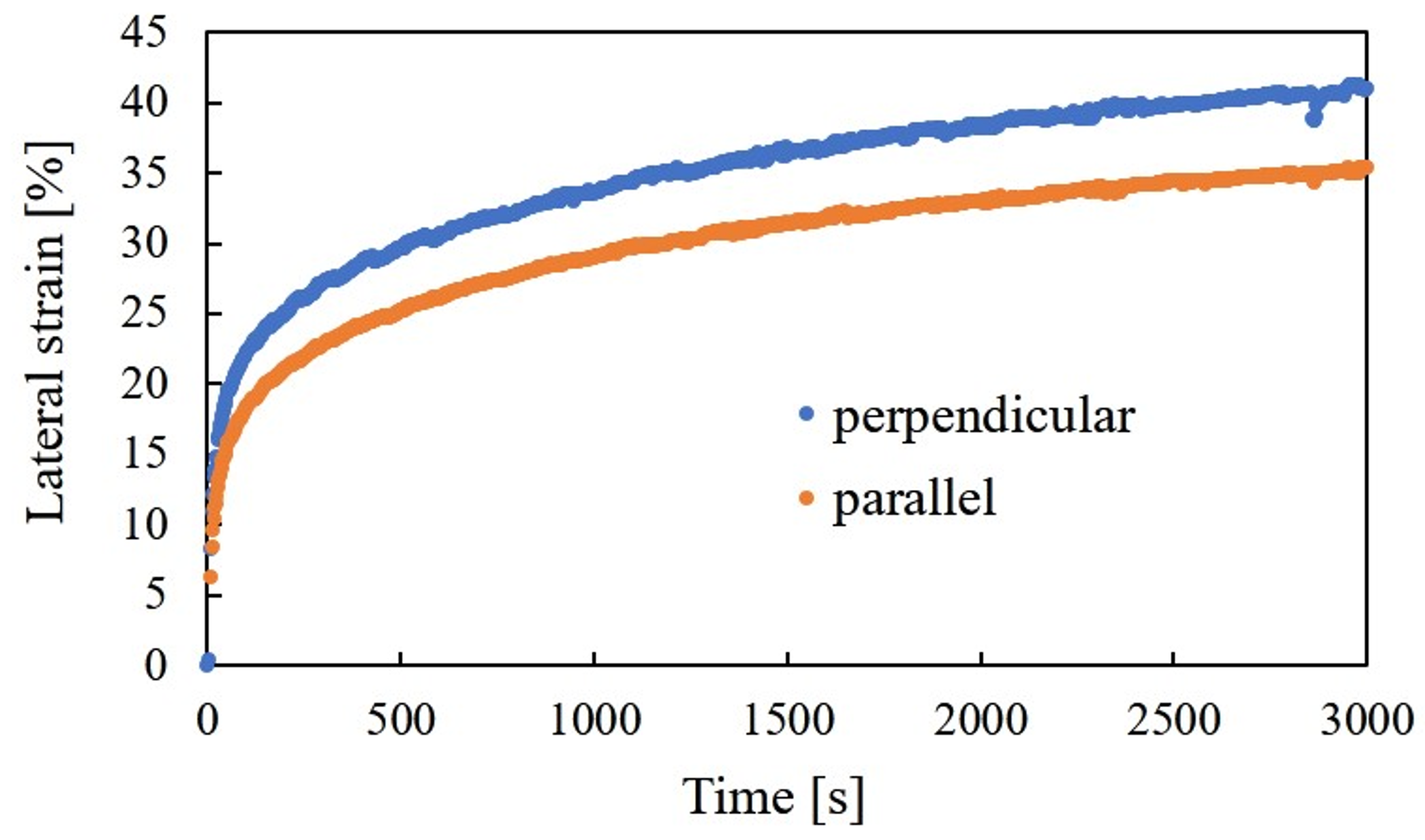