The intranasal administration of Naegleria fowleri lysates plus cholera toxin (CT) increases protection against N. fowleri meningoencephalitis in mice, suggesting that humoral immune response mediated by antibodies is crucial to induce protection against the infection. In the present study, we applied a protein analysis to detect and identify immunogenic antigens from N. fowleri, which might be responsible for such protection. A Western blot assay of N. fowleri polypeptides was performed using the serum and nasal washes from mice immunized with N. fowleri lysates, either alone or with CT after one, two, three, or four weekly immunizations and challenged with trophozoites of N. fowleri. Immunized mice with N. fowleri plus CT, after four doses, had the highest survival rate (100%). Nasal or sera IgA and IgG antibody response was progressively stronger as the number of immunizations was increased, and that response was mainly directed to 250, 100, 70, 50, 37, and 19 kDa polypeptide bands, especially in the third and fourth immunization. Peptides present in these immunogenic bands were matched by nano-LC–ESI-MSMS with different proteins, which could serve as candidates for a vaccine against N. fowleri infection. View Full-Text
Keywords: Naegleria fowleri; immunogenic antigens; cholera toxin; vaccine candidates Naegleria fowleri; immunogenic antigens; cholera toxin; vaccine candidates
►▼ Show Figures 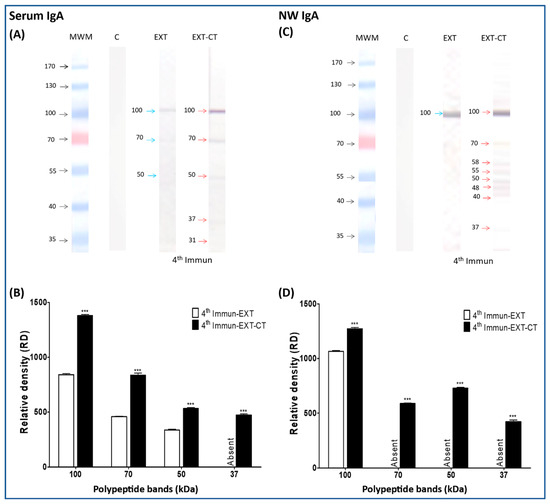