The COVID-19 Pandemic during the Time of the Diabetes Pandemic: Likely Fraternal Twins?
Next Article in Special Issue

Should We Screen HIV-Positive Migrants for Strongyloidiasis?

Background: Strongyloides stercoralis, a nematode endemic in all (sub)tropical regions, can cause life-threatening disease, especially in immunosuppressed patients. Many countries with high HIV-prevalence rates are also highly S. stercoralis endemic, and co-infection may occur. Methods: Retrospective study based on serological testing for S. stercoralis in all HIV-infected migrants followed at the Institute of Tropical Medicine, Antwerp, Belgium. If untested, serologic testing was performed on stored samples, dating from the first HIV viral load determination. The epidemiological, clinical and laboratory features of patients with and without strongyloidiasis were retrieved from the electronic medical files. Results: Of the 2846 HIV patients in active follow-up, 723 (25.4%) had a migration background. Thirty-six patients (5.1%) were diagnosed with Strongyloides co-infection, including 29 during their medical evaluation and seven retrospectively. Patients had a median age of 35.3 years (IQR 30.3–44.4), 28 patients (78%) originated from Sub-Saharan Africa and median time in Belgium was 3.5 years (IQR 0.8–5.7). Symptoms compatible with strongyloidiasis were present in 17 (47%) patients, of whom two were diagnosed retrospectively. Eosinophilia (eosinophil cell count > 450/µL) was observed in 19 (53%) participants. Median CD4 level was 386 /µL (IQR 299–518) at diagnosis of co-infection. Of note, 8 (22%) patients with strongyloidiasis had no reported symptoms nor eosinophilia. None of the patients developed hyperinfection syndrome. There were no differences in age, gender, geographic origin, clinical presentation, CD4 level or viral load between patients with and without strongyloidiasis. Only eosinophilia was strongly correlated with the presence of Strongyloides in multivariate analysis (OR 10.74 (95% CI 5.19–22.25), p < 0.001); the positive likelihood ratio (LR+) of eosinophilia for strongyloidiasis was 5.38 (95% CI 3.66–7.91). Conclusion: Strongyloidiasis was diagnosed in 5.1% of HIV-infected migrants. Eosinophilia had good confirming power for the presence of the disease. However, a sizeable proportion (22%) of co-infected individuals were asymptomatic and had normal eosinophil count, supporting universal screening of all HIV-positive patients native to tropical countries. View Full-Text
Keywords: strongyloidiasis; HIV infection; migrants strongyloidiasis; HIV infection; migrants
►▼ Show Figures 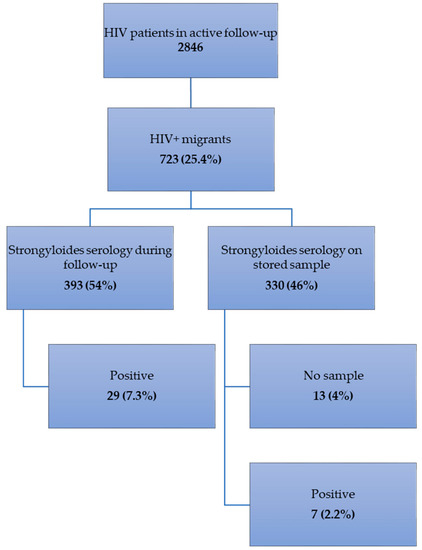