Transcriptional Alteration of Gene Biomarkers in Hemocytes of Wild Ostrea edulis with Molecular Evidence of Infections with Bonamia spp. and/or Marteilia refringens Parasites

Enteric viral pathogens causing gastroenteritis include adenovirus and rotavirus, among others. Rotavirus is the leading cause of severe diarrhea in infants and young children worldwide. Among the adenoviruses known to cause gastroenteritis are those of species F (serotypes 40, 41). Here, we describe the development and validation of a laboratory-developed gastrointestinal triplex rRT-PCR (triplex) assay that targets adenovirus and rotavirus. Stool specimens were tested from patients across Ontario. Specimens were previously tested for adenovirus and/or rotavirus by electron microscopy (EM) or immunochromatographic test (ICT). Triplex sensitivity, specificity, positive and negative predictive values compared to Seegene assay (a commercial assay used here as the standard reference method) were 100%, 97.8%, 86.0%, 100% for adenovirus, and 99.1%, 98.4%, 96.3%. 99.6% for rotavirus, respectively. The triplex assay had a 95.2% and 97.3% overall percent agreements (OPAs) when compared to EM for adenovirus or rotavirus detection, respectively, and an OPA of 90.9% when compared to rotavirus ICT for rotavirus detection. Triplex assay exhibited similar performance to the Seegene assay for both adenovirus and rotavirus and detected more adenovirus and rotavirus than traditional testing methods. The high performance along with lower cost and reduced turnaround time makes the triplex assay a desirable testing method for a clinical microbiology laboratory. View Full-Text
Keywords: multiplex; enteric; gastrointestinal; adenovirus; rotavirus; validation multiplex; enteric; gastrointestinal; adenovirus; rotavirus; validation
►▼ Show Figures 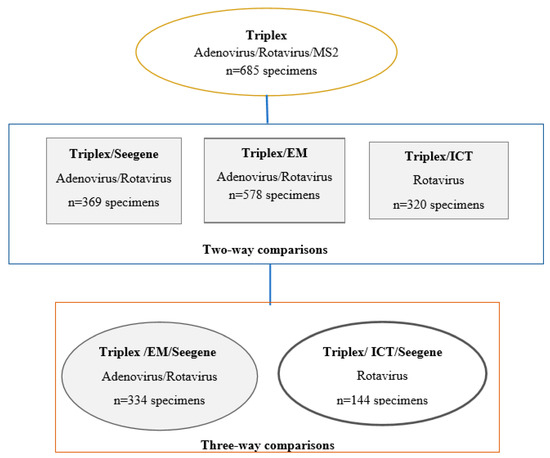