In Vivo Demonstration of the Superior Replication and Infectivity of Genotype 2.1 with Respect to Genotype 3.4 of Classical Swine Fever Virus by Dual Infections
Previous Article in Journal

Kaposi’s sarcoma-associated herpesvirus (KSHV) modulates the immune response to allow the virus to establish persistent infection in the host and facilitate the development of KSHV-associated cancer. The complement system has a central role in the defense against pathogens. Hence, KSHV has adopted an evasion strategy for complement attack using the viral protein encoded by KSHV open reading frame 4. However, despite this defense mechanism, the complement system appears to become activated in KSHV-infected cells as well as in the region surrounding Kaposi’s sarcoma tumors. Given that the complement system can affect cell fate as well as the inflammatory microenvironment, complement activation is likely associated with KSHV pathogenesis. A better understanding of the interplay between KSHV and the complement system may, therefore, translate into the development of novel therapeutic interventions for KSHV-associated tumors. In this review, the mechanisms and functions of complement activation in KSHV-infected cells are discussed. View Full-Text
Keywords: KSHV; complement system; innate immunity; virus–host interaction; membrane attack complex KSHV; complement system; innate immunity; virus–host interaction; membrane attack complex
►▼ Show Figures 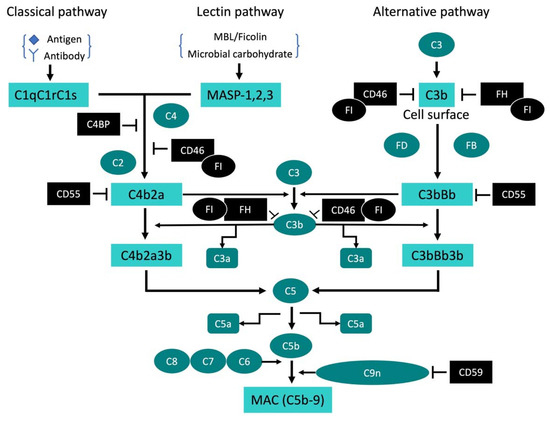