Acknowledgement to Reviewers of Pathogens in 2019

In many low- and middle-income countries, data limitations are a major challenge facing the development of food safety risk assessment. In the present study, a questionnaire data collection tool was designed with an emphasis on gathering specific data points required by a risk modeller for simulating a scenario of Campylobacter cross-contamination during handling of raw chicken meat at the consumer phase. The tool was tested in practice to support its value and applicability in settings where data limitations are a challenge. The study subjects were 450 consumers in two Middle Eastern settings: Alexandria in Egypt (n = 200) and Thi-Qar in Iraq (n = 250). The majority (78.5%) of respondents in Egypt opted for wet markets/live bird shops as their preferred source of chicken meat. In contrast, 59.6% of Iraqi respondents preferred to buy chicken meat from supermarkets. Added to that, 73.0% of consumers in Egypt and 56.8% of consumers in Iraq viewed the quality of frozen chicken as “inferior” to that of chicken from wet markets. Almost all respondents in both Egypt and Iraq shared the practice of washing chicken in water before cooking. The percentage of consumers who ‘very frequently’ or ‘frequently’ prepare chicken prior to making the salad was 32.5% and 55.2% in Egypt and Iraq, respectively. A sizeable proportion of respondents in Iraq (40.8%) reported that they did not consider washing their hands with soapy water after touching raw chicken and preparing a salad in their home kitchen. Finally, 28.8% and 6.5% of respondents in Iraq and Egypt, respectively, indicated that they would not consider using a separate cutting board to avoid cross-contamination between raw chicken and salad. The data collection tool used in this study was designed in the first instance to match a conceptualised risk assessment framework, and that enabled the simultaneous collection of data points on consumption frequency, serving sizes, purchasing patterns, retail chain diversity and food handling practices. Results from such study design could be used for future development of a quantitative risk assessment model and to support food safety promotion efforts for domestic consumers in two of the most populated Middle Eastern countries. View Full-Text
Keywords: Campylobacter; Middle East; risk assessment; Egypt; Iraq Campylobacter; Middle East; risk assessment; Egypt; Iraq
►▼ Show Figures 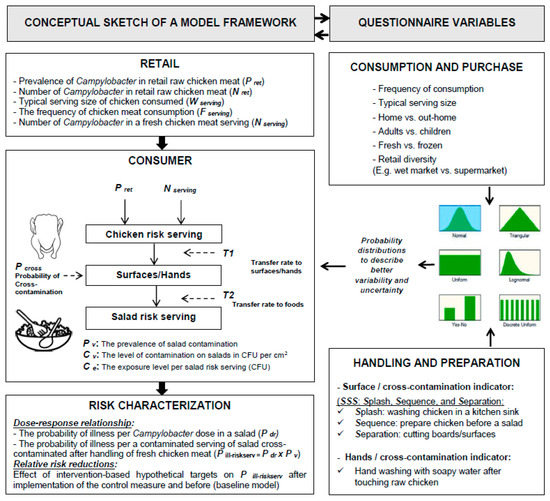 Habib, I.; Harb, A.; Hansson, I.; Vågsholm, I.; Osama, W.; Adnan, S.; Anwar, M.; Agamy, N.; Boqvist, S. Challenges and Opportunities towards the Development of Risk Assessment at the Consumer Phase in Developing Countries—The Case of Campylobacter Cross-Contamination during Handling of Raw Chicken in Two Middle Eastern Countries. Pathogens 2020, 9, 62.


Habib I, Harb A, Hansson I, Vågsholm I, Osama W, Adnan S, Anwar M, Agamy N, Boqvist S. Challenges and Opportunities towards the Development of Risk Assessment at the Consumer Phase in Developing Countries—The Case of Campylobacter Cross-Contamination during Handling of Raw Chicken in Two Middle Eastern Countries. Pathogens. 2020; 9(1):62.