Analysis of Porcine Pro- and Anti-Inflammatory Cytokine Induction by S. suis In Vivo and In Vitro

Fire blight, which is caused by the bacteria Erwinia amylovora, remains one of the most important diseases limiting the productivity of apple and pear orchards in the United States. In commercial orchards, in-season fire blight management relies exclusively on the use of antibiotic treatments (such as streptomycin and oxytetracycline) and on bacterial biocontrol agents whose efficacy is limited. We hypothesize that the efficacy of the biocontrol agents can be greatly enhanced through targeted delivery to flowers, which serve as initial infection courts, using the Japanese orchard bee, Osmia cornifrons. Many factors, such as the synchrony of life cycle with plant phenology and specificity to pomaceous plants, suggest that O. cornifrons could be an excellent vector of the biocontrol products during bloom in pome tree fruits. However, deployment of this pollinator species to deliver biocontrol agents for fire blight control has not been attempted previously due to the lack of an efficient system to pack the bodies of the bees exiting nesting tubes with the biocontrol products. In this study, we design and test a dispenser system to facilitate the use of O. conifrons as a vector for commercially available biocontrol products for fire blight control. The effectiveness of O. conifrons to deliver biocontrol agents to flowers, and to effect secondary dissemination from treated to untreated flowers is also evaluated in greenhouse experiments. We found that the O. conifrons bees were able to use the nest dispenser designed for the delivery of biological control products, and are effective in vectoring and delivering the Bacillus subtilis-based biological control product (Serenade®) to apple blossoms. We also found that the O. cornifrons were effective in secondary inoculation of this biological control product to newly-opened flowers. These findings suggest the potential use of commercially available O. conifrons and other orchard bees in targeted delivery of biological control products for fire blight, and possibly other diseases, in different fruit crops. View Full-Text
Keywords: fire blight; pollinator; bees; Bacillus subtilis; bee vectoring technology; biological control; apple; Osmia cornifrons; orchard; bacterial disease fire blight; pollinator; bees; Bacillus subtilis; bee vectoring technology; biological control; apple; Osmia cornifrons; orchard; bacterial disease
►▼ Show Figures 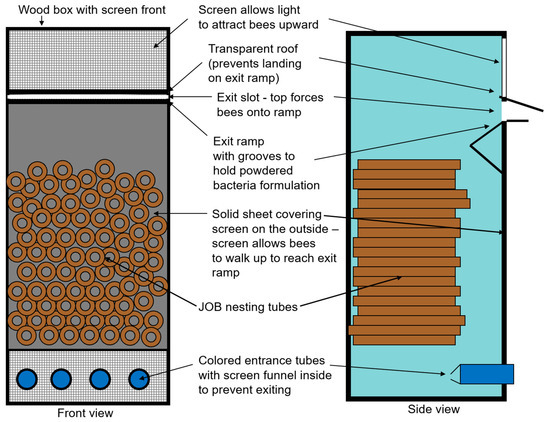