Despite being a well-known human pathogen, Klebsiella pneumoniae plays a significant role in the biotechnology field, being considered as a microbial cell factory in terms of valuable chemical biosynthesis. In this work, Klebsiella pneumoniae DSMZ 2026 was investigated for its potential to biosynthesize 1,3-propanediol (PDO) and 2,3-butanediol (BDO) during batch fermentation under controlled and uncontrolled pH levels. The bacterial strain was cultivated at a bioreactor level, and it was inoculated in 2 L of specific mineral broth containing 50 g/L of glycerol as the main carbon source. The process was conducted under anaerobic conditions at 37 °C and 180 RPM (rotations per minute) for 24 h. The effect of pH oscillation on the biosynthesis of PDO and BDO was investigated. Samples were taken every 3 h and specific tests were performed: pH measurement, main substrate consumption, PDO and BDO production. The cell morphology was analyzed on both solid and liquid media. After 24 h of cultivation, the maximum concentrations of PDO and BDO were 28.63 ± 2.20 g/L and 18.10 ± 1.10 g/L when the pH value was maintained at 7. Decreased concentrations of PDO and BDO were achieved (11.08 ± 0.14 g/L and 7.35 ± 0.00 g/L, respectively) when the pH level was not maintained at constant values. Moreover, it was identified the presence of other metabolites (lactic, citric, and succinic acids) in the cultivation media at the beginning of the process, after 12 h and 24 h of cultivation. View Full-Text
Keywords: Klebsiella pneumoniae; pathogenic strain; pH; 1,3-propanediol; 2,3-butanediol; batch fermentation; viability Klebsiella pneumoniae; pathogenic strain; pH; 1,3-propanediol; 2,3-butanediol; batch fermentation; viability
►▼ Show Figures 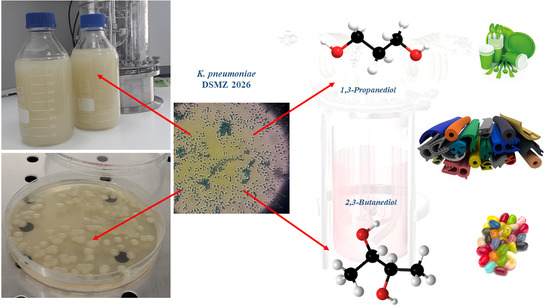