Impact of Mosquito Age and Insecticide Exposure on Susceptibility of Aedes albopictus (Diptera: Culicidae) to Infection with Zika Virus

Robert B. Norgren Jr. 5 and

Zika Virus (ZIKV) is primarily transmitted through mosquito bites. It can also be transmitted during sexual intercourse and in utero from mother to fetus. To gain preliminary insight into ZIKV pathology and immune responses on route of transmission, rhesus macaques (RMs) were inoculated with ZIKV (PRVABC59) via intravaginal (IVAG) (n = 3) or subcutaneous (sub Q) (n = 2) routes. Systemic ZIKV infection was observed in all RMs, regardless of the route of inoculation. After 9 days postinfection (dpi), ZIKV was not detected in the plasma of IVAG- and sub-Q-inoculated RMs. Importantly, RMs harbored ZIKV up to 60 dpi in various anatomical locations. Of note, ZIKV was also present in several regions of the brain, including the caudate nucleus, parietal lobe, cortex, and amygdala. These observations appear to indicate that ZIKV infection may be systemic and persistent regardless of route of inoculation. In addition, we observed changes in key immune cell populations in response to ZIKV infection. Importantly, IVAG ZIKV infection of RMs is associated with increased depletion of CD11C hi myeloid cells, reduced PD-1 expression in NK cells, and elevated frequencies of Ki67+ CD8+ central memory cells as compared to sub Q ZIKV-infected RMs. These results need to interpreted with caution due to the small number of animals utilized in this study. Future studies involving large groups of animals that have been inoculated through both routes of transmission are needed to confirm our findings.
Keywords: Zika; Flaviviruses; rhesus macaque; intravaginal; sexual transmission; immunopathogenesis Zika; Flaviviruses; rhesus macaque; intravaginal; sexual transmission; immunopathogenesis

Zika Virus (ZIKV) is predominantly transmitted by mosquitoes (Aedes aegypti) [1,2,3,4,5,6,7,8,9,10,11,12,13,14,15,16,17] and sexual intercourse [18]. ZIKV sexual transmission may occur from a male to a female [1,2,3,4,5,6,7,9,10,11,12,15,16,17] or to a male [8,13]. It has been shown to persist up to 93 days and 11 days after infection in semen and vaginal mucosa, respectively [19,20].
Subcutaneous (sub Q) inoculation of rhesus macaques (RMs) with ZIKV results in widespread systemic infection in multiple organs, including the lymph nodes (LNs), heart, spleen, spinal cord, and the brain [21]. ZIKV infection is associated with fetal brain abnormalities. Besides microcephaly, ZIKV infection may result in other birth defects collectively referred to as congenital Zika syndrome [22]. ZIKV infection may also result in abnormalities in the adult brain such as meningoencephalitis and acute flaccid paralysis [23,24,25]. In both fetal and adult brains, ZIKV infects neural progenitor cells which differentiate into neurons or glia [23]. In the adult ZIKV-infected mouse brain, neural progenitor cells in the subventricular zone and subgranular zone of the hippocampus have decreased proliferation and increased cell death [23].
ZIKV can also be transmitted via the vaginal route in mice and macaques. Viral RNA has been detected in the lower reproductive tract up to 7 days postinfection (dpi) in mice [26,27,28]. Importantly, ZIKV vaginal exposure in pregnant mice also resulted in fetal brain infection and restricted intrauterine growth [28]. Alternatively, Carrol and coworkers found that some RMs were more resistant to ZIKV infection after repeated vaginal exposures to high titers of ZIKV [18]. Resistance to intravaginal (IVAG) transmission was overcome by administrating progesterone (Depo-Provera) to some RMs before and during IVAG inoculation. Depo-Provera facilitated ZIKV IVAG transmission by inhibiting proinflammatory cytokines [18]. In order to understand the immunologic/virologic dynamics following IVAG or sub Q ZIKV transmission and tissue-wide distribution, we conducted preliminary studies utilizing a small number of RMs.

As described in the Figure 1A, macaques were inoculated with ZIKV strain PRVABC59 through IVAG or sub Q routes. Blood samples were collected at various time points. During necropsy, various tissues and organs, including brain sections, were collected.

During the course of both routes of viral infection, all RMs had no significant changes in appetite, dehydration, diarrhea, depression, rash, conjunctivitis, and fever. In addition, all RMs maintained normal body temperatures and weights throughout the study.

Next, we determined changes in immune cell populations in IVAG- and sub-Q-inoculated RMs (Figure 2). We focused on B cells, T cells, NK cells, myeloid dendritic cells (mDC), and monocytes. All RMs had similar frequencies of B cells (Figure 2A) and CD8+ T cells (Figure 2B) throughout the course of viral infection. However, we observed differing trends in changes in certain immune cell populations in RMs inoculated via IVAG or sub Q routes. The frequencies of Ki67+ central memory CD8+ (CD28+/CD95+/CD8+/CD3+) appeared to be higher in IVAG compared to sub Q ZIKV infection beyond 5 dpi (p = 0.03) (Figure 2C). Then, we observed that sub-Q-inoculated RMs appeared to have greater PD-1 expression in NK (CD8α+/NKG2A+ of CD3−) cells compared to IVAG-inoculated RMs during days: 0–5 (P = 0.025), 5–7 (P = 0.0028), and 7–14 (P = 0.0051), respectively (Figure 2D).
Furthermore, we evaluated the changes occurring in myeloid cell populations, especially on CD11C hi mDCs and classical monocyte (CD14++ CD16−) phenotypes. No significant changes in frequencies of CD80+ Ki67+ expression were observed in the classical monocyte (CD14++ CD16−) population following either IVAG or sub Q inoculation (Figure 2E). CD11C hi mDCs were categorized as CD11C hi/HLADR+/CD123−/Lin−/CD3− cells (Supplementary Figure S1). A decrease in frequencies of CD11C hi mDC population was observed during days 7–14 in IVAG as compared to sub-Q-inoculated RMs (P = 0.01) (Figure 2F).

A total of five adult female Indian-origin rhesus monkeys (Macaca mulatta) were utilized in this study. All animals were maintained at the Department of Comparative Medicine at the University of Nebraska Medical Center (UNMC) in accordance with the rules and regulations of the Institutional animal Care and Use Committee and according to the guidelines of the Committee on the Care and Use of Laboratory Animals of the Institute of Laboratory Animal Resources, National Research Council, and the Department of Health and Human Services guidelines titled Guide for the Care and Use of Laboratory Animals. All protocols and procedures were performed under approval of the UNMC Institutional Animal Care and Use Committee according to the National Institute of Health guidelines. The animals were fed a monkey diet (Harlan Teklad #2055) supplemented daily with fresh fruits or vegetables and water ad libitum. Additional social enrichment, including the delivery of appropriate safe toys, was provided and overseen by the UNMC enrichment staff. Animal health was monitored daily and recorded by the animal care staff and veterinary personnel, available 24 h a day and 7 days a week. Monkeys were caged in and individually housed throughout the study. Monkeys showing signs of sustained weight loss, disease, or distress were subject to clinical diagnosis based on symptoms and then provided standard dietary supplementation, analgesics, and/or chemotherapy. The UNMC primate housing facility has been fully accredited by the Association for Assessment and Accreditation of Laboratory Animal Care International.

4.2. ZIKV Inoculation and Collection of Blood

Animals were anesthetized with an intramuscular injection of 10 mg/kg of ketamine before initiating any experimental procedure including blood draw. Animals were inoculated IVAG (n = 3) or sub Q (n = 2) with 2 × 106 PFU/mL of ZIKV strain PRVABC59 (obtained through BEI resources). A needleless 1-mL tuberculin syringe was utilized to inoculate virus (1 mL) into the vaginal canal.
After inoculation, animals were kept in an elevated position for 15 min. RMs were evaluated for evidence of any illnesses, changes in appetite, dehydration, diarrhea, depression, rash, conjunctivitis, fever, and inactivity. Blood was drawn from the femoral vein at 0, 3, 5, 7, 9, 14, 21, 28, 60, and 110 dpi. Animals were sacrificed at 8, 21, 60, or 110 dpi by terminal cardiac perfusion.

At necropsy blood and cerebrospinal fluid (CSF) were collected. Organs were harvested and stored in Optimal Cutting Temperature (OCT) compound for RNAscope or snap frozen for RNA extraction (Figure 1A). Brains were removed from skulls and microdissected. Biopsy punches (HealthLink, Jacksonville, FL, USA) were used to isolate tissue from specific regions of the brain. Surface features of the cerebral cortex were used to identify each of the lobes so that samples could be collected. A brain MacroknifeTM (CellPath, NewTown Powys, UK) was then used to section the brains into slices. Internal structures were then identified and microdissected as samples.

To study differences in cellular phenotypes arising from IVAG versus sub Q routes of infection, we carried out multiple T-tests at different time points. The final values obtained were post-test corrected using Benjamini, Krieger, and Yekutieli’s two-stage linear step up procedure. All P values less than 0.05 were considered statistically significant.

We wish to thank BEI resources for providing several reagents for this study. 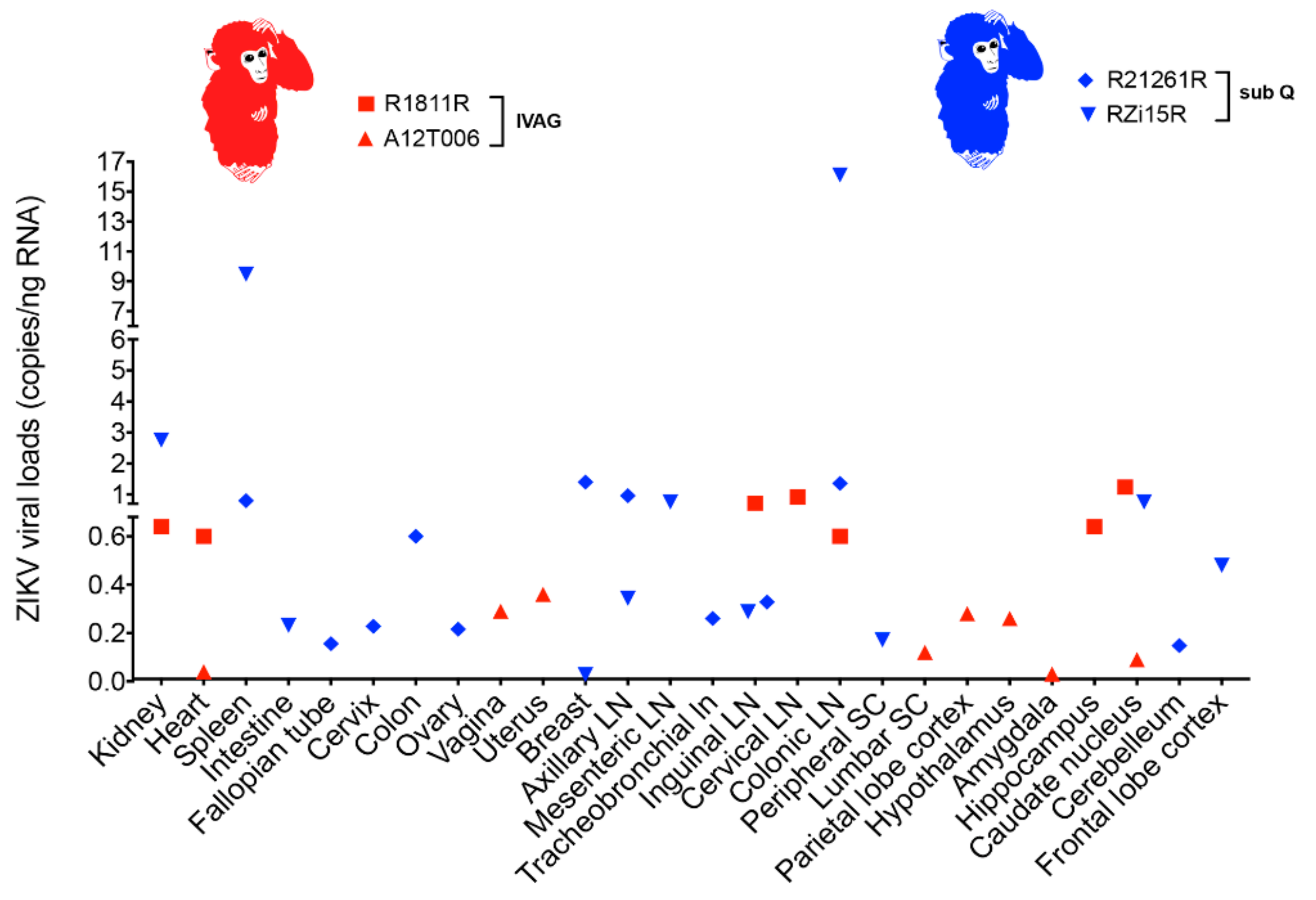