The Structure of PrPSc Prions
Next Article in Special Issue

Bioenergetics of Mycobacterium: An Emerging Landscape for Drug Discovery
Previous Article in Journal

Pathogenesis and Animal Models of Post-Primary (Bronchogenic) Tuberculosis, A Review

Primary and post-primary tuberculosis (TB) are different diseases caused by the same organism. Primary TB produces systemic immunity. Post-primary TB produces cavities to support massive proliferation of organisms for transmission of infection to new hosts from a person with sufficient immunity to prevent systemic infection. Post-primary, also known as bronchogenic, TB begins in humans as asymptomatic bronchial spread of obstructive lobular pneumonia, not as expanding granulomas. Most lesions regress spontaneously. However, some undergo caseation necrosis that is coughed out through the necrotic bronchi to form cavities. Caseous pneumonia that is not expelled through the bronchi is retained to become the focus of fibrocaseous disease. No animal reproduces this entire process. However, it appears that many mammals utilize similar mechanisms, but fail to coordinate them as do humans. Understanding this makes it possible to use human tuberculous lung sections to guide manipulation of animals to produce models of particular human lesions. For example, slowly progressive and reactivation TB in mice resemble developing human bronchogenic TB. Similarly, bronchogenic TB and cavities resembling those in humans can be induced by bronchial infection of sensitized rabbits. Granulomas in guinea pigs have characteristics of both primary and post primary TB. Mice can be induced to produce a spectrum of human like caseating granulomas. There is evidence that primates can develop bronchogenic TB. We are optimistic that such models developed by coordinated study of human and animal tissues can be used with modern technologies to finally address long-standing questions about host/parasite relationships in TB, and support development of targeted therapeutics and vaccines. View Full-Text
Keywords: tuberculosis; pathology; pathogenesis; animal model; post-primary; bronchogenic; human; mouse; rabbit; primate tuberculosis; pathology; pathogenesis; animal model; post-primary; bronchogenic; human; mouse; rabbit; primate
►▼ Show Figures 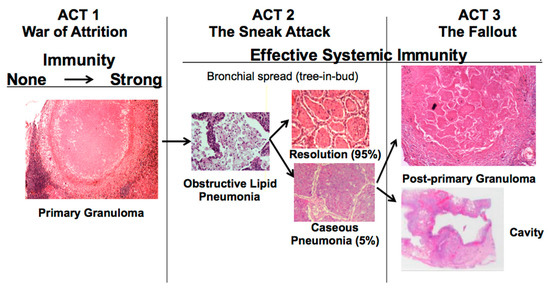