In 1981, a new virus (virus 132) was described for the first time with morphological and biochemical similarities to rotaviruses (RVs), but without antigenic similarity to any of the previously known rotavirus groups. Subsequently, it was re-designated as D/132, and formed a new serogroup among rotaviruses, the group D rotavirus (RVD). Since their identification, RVs are the leading cause of enteritis and diarrhea in humans and various animal species, and are also associated with abridged growth, particularly in avian species. Recently, RVD has been suggested to play a role in the pathogenesis of runting and stunting syndrome (RSS), alongside other viruses such as reovirus, astrovirus, coronavirus, and others, all of which cause colossal economic losses to the poultry industry. RVD has been reported from several countries worldwide, and to date, only one complete genome sequence for RVD is available. Neither an immunodiagnostic nor a vaccine is available for the detection and prevention of RVD infection. Despite our growing understanding about this particular group, questions remain regarding its exact prevalence and pathogenecity, and the disease-associated annual losses for the poultry industry. Here, we describe the current knowledge about the identification, epidemiology, diagnosis, and prevention of RVD in poultry. View Full-Text
Keywords: rotavirus D; poultry; runting and stunting syndrome; diagnosis; epidemiology; control; challenges rotavirus D; poultry; runting and stunting syndrome; diagnosis; epidemiology; control; challenges
►▼ Show Figures 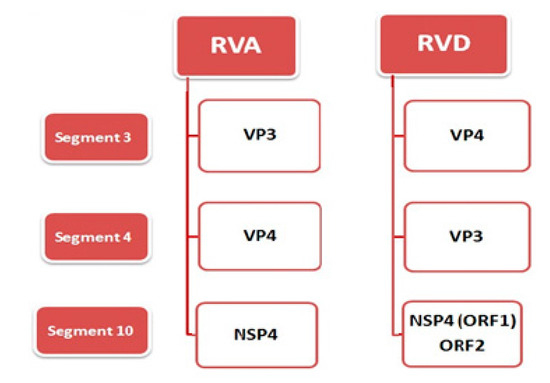