A Review of Salmonella and Squamates (Lizards, Snakes and Amphisbians): Implications for Public Health
Previous Article in Special Issue

:
Lipid rafts are liquid-ordered membrane microdomains that form by preferential association of 3-β-hydroxysterols, sphingolipids and raft-associated proteins often having acyl modifications. We isolated lipid rafts of the protozoan parasite Trypanosoma brucei and determined the protein composition of lipid rafts in the cell. This analysis revealed a striking enrichment of flagellar proteins and several putative signaling proteins in the lipid raft proteome. Calpains and intraflagellar transport proteins, in particular, were found to be abundant in the lipid raft proteome. These findings provide additional evidence supporting the notion that the eukaryotic cilium/flagellum is a lipid raft-enriched specialized structure with high concentrations of sterols, sphingolipids and palmitoylated proteins involved in environmental sensing and cell signaling.
Keywords:
trypanosomes; lipid rafts; flagellum; intraflagellar transport

Cell membranes constitute a large fraction of the biomass of a typical cell and contain 25–40% of all cellular proteins [1]. Because of the hydrophobic environment of the lipid bilayer, membrane proteins require membrane spanning α-helices or β-sheets or hydrophobic lipid modifications to reside in this environment. The lipid modifications include glycosylphosphatidylinositol anchors, N-terminal myristic acid tails, palmitic acid tails acquired through cysteine acylation, and C-terminal prenyl groups. Within cell membranes are microdomains called lipid rafts, which are liquid-ordered (gel-like) regions containing high concentrations of 3-β-hydroxysterols, sphingolipids and proteins having acyl modifications such as myristoylation and palmitoylation [2,3,4,5]. Lipid rafts are present in all eukaryotic cells and provide platforms for the assembly of cell-signaling complexes [2,6,7]. Lipid rafts have the special property of detergent resistance and can be extracted from the membrane using cold non-ionic detergents [6]. Lipid rafts or raft-associated proteins are involved in the pathogenesis of a number of human diseases, including infectious diseases [8].
In kinetoplastids, single-celled organisms containing a unique mitochondrial DNA called kinetoplast DNA, lipid rafts and raft-associated proteins have been characterized in Leishmania spp. [9], Trypanosoma cruzi [10,11] and Trypanosoma brucei [4,12]. The intracellular trypanosomatids T. cruzi and Leishmania exploit lipid rafts for immune evasion and host cell infection [7]. Cholesterol is essential for the pathogenesis of malaria and leishmaniasis both by promoting the attachment of the parasite to the host cell and by catalyzing the internalization of the parasite into the host cell [13]. Leishmania can survive and proliferate inside macrophages by disrupting lipid rafts, causing an alteration in CD40 signaling leading to defective antigen presentation resulting from increased membrane fluidity [14]. Similarly, T. cruzi recruits lysosomes and forms ceramide-enriched endocytic vesicles in a calcium-dependent manner to facilitate its entry into the host cell [13]. Thus, the dynamics of host lipid rafts and parasite lipid rafts has important implications in signaling events leading to parasite infection.
T. brucei, the causative agent of human African trypanosomiasis (sleeping sickness), is an elegant model organism for studies of basic eukaryotic cell biology and biochemistry. Both BSF and PF stages are genetically manipulable by both RNA interference [15] and CRISPR-Cas9 genome editing [16]. The life cycle of this parasite involves several stages in the tsetse fly insect vector and the bloodstream of the mammalian host. Two GPI-anchored proteins, variant surface glycoprotein in the bloodstream form (BSF) and procyclin in the insect mid-gut form, the procyclic (PF), dominate the surface of T. brucei, but are not lipid raft associated due to unique properties of the GPI anchor structure in trypanosomes [17].
Work done by our laboratory and others has revealed the flagellar membrane of T. brucei to be highly enriched in sterols, sphingolipids and dually-acylated proteins [4,11,18]. Phospholipids are also enriched in the flagellar membrane [11,19]. Although there are clear differences in the sterol, sphingolipid and dually acylated protein compositions of T. brucei flagellar and cell body membranes, the set of proteins that are associated with lipid rafts in trypanosomes and other protozoans is not known. In the current study, we determined the lipid raft proteome of T. brucei PF cells and discuss the findings in the context of flagellar proteins.

We isolated lipid rafts from PF T. brucei using a detergent-free method [20] that has been employed previously for similar studies in other organisms [21,22,23]. The lipid raft preparation was applied to a discontinuous Optiprep gradient and gradient fractions were analyzed by SDS-PAGE and western blotting for Calflagin, a well-characterized family of three flagellar calcium binding proteins (Tb44, Tb24 and Tb17) that associate with lipid rafts [4] via dual acylation with myristate and palmitate [12] (Figure 1A). The lipid raft fractions also contain the raft-associated protein CAP5.5 [24] but do not contain mitochondrial Hsp70 (mtHsp70), which is found in the mitochondrial matrix (Figure 1B).

The lipid raft proteome was determined as described in Methods. While known lipid raft-associated proteins such as Calflagin and CAP5.5 were present in this proteome, the GPI-anchored major surface protein procyclin was absent, as expected, since it does not associate with lipid rafts [4]. After filtering out contaminants, 351 proteins remained in the lipid raft protome (Supplementary Table S1). Proteins that are indicated in bold text are of special interest and include positive controls Calflagin and CAP5.5. Eighteen percent of the 351 proteins are of unknown function. Proteins having known or likely functions include several putative flagellar-signaling molecules, including Rab-like GTPases that are part of the intraflagellar transport protein (IFT) complex-B. These include IFT 22 (RabL5) and IFT27 (RabL4), Rab-like small G proteins with possible roles in IFT regulation [25,26]. Arginine kinase, a flagellar protein important for infection in tsetse flies [27] is also present, as is Aquaporin, a plasma membrane-specific surface drug transport protein [28] involved in pentamidine resistance in BSF parasites [29].

2.2. Comparison of the Lipid Raft Proteome with the Flagellar Proteome, GO Terms and Protein Localization

One protein that is particularly abundant in the lipid raft proteome is autoantigen I/6 (Tb927.7.3440), a cytoskeletal protein that is highly immunogenic and possesses a non-functional EF-hand [32,33]. Not much more is known about this protein, but it is one of the high confidence palmitoylated proteins we determined in a previous study [34], and thus an excellent candidate for lipid raft association. We found that autoantigen I/6 is associated with DRMs using a standard assay in which DRM proteins are found in the pellet at 4 °C but become solubilized upon warming to 37 °C (see Methods). Since we did not have an I/6-specific antibody, we employed a cell line expressing autoantigen I/6 fused to e-GFP. A large fraction of autoantigen I/6-eGFP was detected in the pellet fraction at 4 °C and in the soluble fraction upon warming to 37 °C (Figure 3). Positive controls Calflagin and CAP5.5 behaved similarly in this assay. mtHsp70 and paraflagellar rod 2 protein (PFR) were included as the detergent soluble and insoluble controls, respectively, and BIP (GRP78) was included because it is found in all fractions.
We were initially surprised to find so many IFT proteins in the lipid raft proteome and therefore decided to test the DRM association of two Rab-like IFT proteins—TbIFT22 and TbIFT27. TbIFT22 was abundant in an initial BSF lipid raft proteome (data not shown), and also had several peptides each in two biological replicates in the PF lipid raft proteome (Supplementary Table S1). We were able to test the DRM association of TbIFT22 using a specific antibody kindly provided by the Bastin lab. We did not have an TbIFT27-specific serum, so we generated a cell line expressing eGFP-TbIFT27 for this analysis. Both IFT proteins displayed modest DRM association, being found in both the 4 °C pellet and supernatant, but solely in the supernatant upon warming to 37 °C (Figure 3).

Lipid rafts were isolated using a detergent-free method of MacDonald and Pike [20]. 8 × 108 cells of 29-13 PF T. brucei were pelleted by centrifugation at 1000× g. Cells were washed twice with PBS supplemented with 13 mM glucose (PBSG) and suspended at 8 × 108/mL in base buffer (20 mM Tris-HCl, pH 7.8, 250 mM sucrose) supplemented with 1 mM CaCl2, 1 mM MgCl2, and protease inhibitors. All of the following procedures were carried out in a cold room. Cells were lysed by ten passages through 1.5 inch long 22 ga needle and centrifuged at 1000× g. The supernatant was collected and the pellet was lysed again and centrifuged and the second supernatant was collected and combined with the first. The combined supernatant fractions were subjected to Optiprep gradient (0–25%) ultracentrifugation at 52,000× g using an SW41Ti rotor in a Beckman ultracentrifuge for 90 min as described previously [20]. 800 μL fractions, including the buoyant proteins at the upper gradient interface, were run on an SDS-PAGE gel and transferred to nitrocellulose membranes for western blot analysis. Calflagin [55] and CAP5.5 (generously provided by the Gull lab) were used as positive controls and mtHsp70 [56] and PFR2 (generous gift of the Hill lab) as negative controls for the blot. Fractions corresponding to buoyant lipid rafts were frozen at −80 °C until ready for proteomic analysis.

A BCA assay (Thermo Fisher Scientific, Waltham, MA, USA) was used to determine the protein concentration of the raft fractions. Lipid raft fractions equivalent to 30 μg of protein from four different biological replicates were run on 10% SDS-PAGE gel to get rid of contaminants and Optiprep before submitting the full gel lanes for proteomic analysis. The steps that follow were performed at the Northwestern University Proteomics Core. Each gel lane was cut into three parts based on molecular weight before performing bottom-up proteomic using a protocol described previously [57]. Gel slices were washed in 100 mM ammonium bicarbonate/acetonitrile (AmBic/ACN) and reduced with 10 mM dithiothreitol at 50 °C for 30 min. Cysteine was alkylated with 100 mM iodoacetamide in the dark for 30 min, room temperature. The slices were then washed in 100 mM AmBic/ACN prior to digestion with 500 ng trypsin overnight at 37 °C. Supernatants containing peptides were saved into a new tube. Gel slices were washed at room temperature for ten minutes with gentle shaking in 50% ACN/5% formic acid (FA), and supernatant was saved to peptide solution. The washes were repeated each with by 80% ACN/5% FA, and 100% ACN, and all supernatants were saved into peptide solution then dried by speedvac. After lyophilization, peptides were reconstituted with 0.1% FA in water and injected onto a trap column (150 µm ID × 3 cm) coupled with a nanobore analytical column (75 µm ID × 10 cm, both ReproSil C18aq, 1.9 µm). Samples were separated using a linear gradient of solvent A (95% water, 5% acetonitrile, 0.1% formic acid) and solvent B (5% water, 95% acetonitrile, 0.1% formic acid) over 200 min. MS data were obtained on a Velos Orbitrap (Thermo Fisher Scientific) mass spectrometer. Data were searched using Mascot (Matrix Science, Boston, MA, USA) 2.5 against the UniProt database, T. brucei, and results were reported at 1% FDR (false discovery rate) using Proteome Discoverer software 1.4 (Thermo Fisher Scientific). Raw data obtained from the core were refined by removing non-specific hits that did not correspond to the protein size range for the gel piece in question.

The authors have no conflicts of interest. 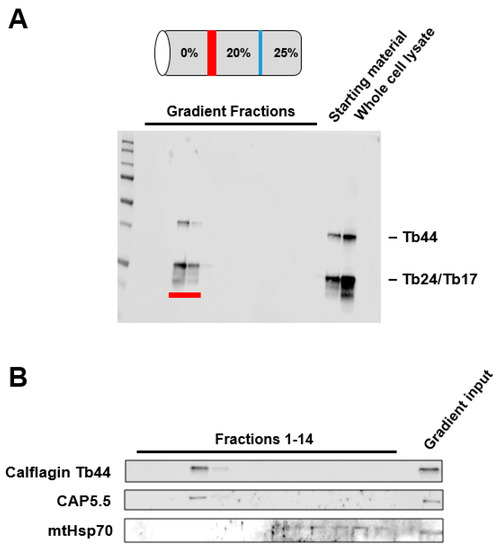 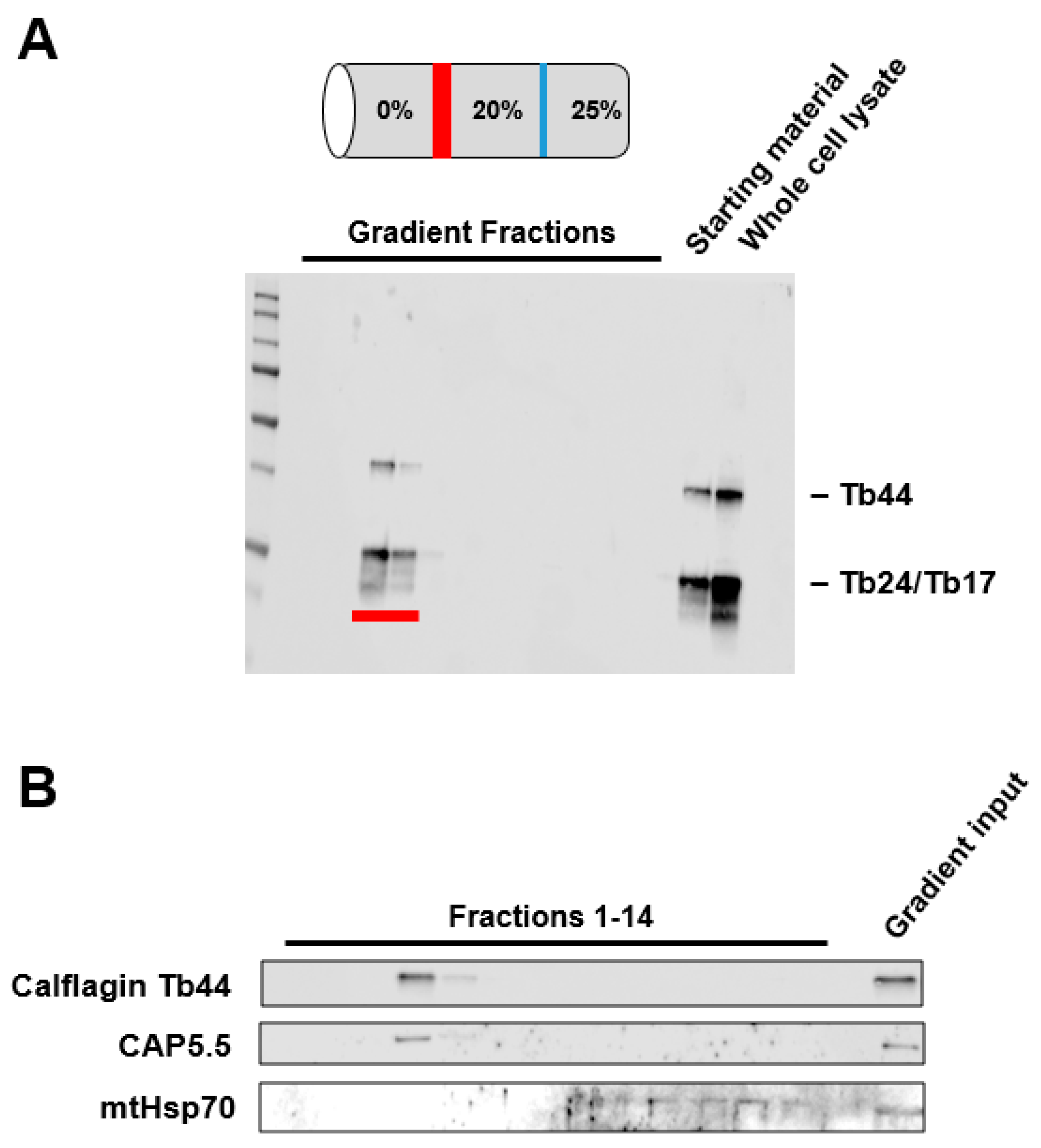 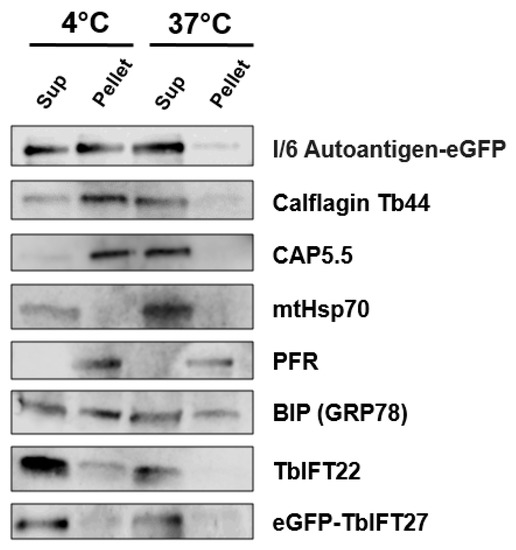