Human papillomavirus (HPV) is suggested to infect trophoblasts in the placenta, and HPV infections are reported to be more prevalent in pregnancies with adverse outcomes. Results are however controversial, and studies investigating the molecular consequences of placental HPV infections are lacking. We studied HPV DNA localization in the placenta in cases of spontaneous abortion/spontaneous preterm delivery as well as in elective abortion/normal full-term delivery. Using in vitro assays, we investigated downstream effects of HPV16 E6 and E7 expression in trophoblast cells at the gene expression level in order to gain increased biological insight into the interaction between HPV and the cellular host. Fluorescent in situ hybridization (FISH), combined with fluorescent immunohistochemistry (FIHC) to target the trophoblast marker CK7 clearly showed, that HPV DNA resides within syncytiotrophoblast cells in the placenta. In vitro HPV16 E6 and E7-transfected trophoblasts were analyzed by RNA sequencing, and results were validated by reverse transcription real time polymerase chain reaction (RT-qPCR) for selected genes in cell lines, as well as in patient material. We show that HPV16 E6 and E7 upregulate interferon-induced antiviral response genes ISG15 and IFIT1 in a human trophoblast cell line two-days post-transfection. This is a response that is not observed when assessing the gene expression levels of the same genes in HPV16-positive placenta samples. Investigations on viral activity find that HPV16 E6 and E7 are not transcribed in patients, possibly suggesting that HPV16 syncytiotrophoblast infection may be latent. We conclude that HPV localizes to syncytiotrophoblast cells of the placenta, and that active expression of HPV16 E6 and E7 induce an immediate interferon-induced antiviral response in trophoblast cells, which is not present in HPV-positive placenta samples, suggesting latent infection. View Full-Text
Keywords: human papillomavirus; trophoblast cell; placenta; interferon; antiviral response human papillomavirus; trophoblast cell; placenta; interferon; antiviral response
►▼ Show Figures 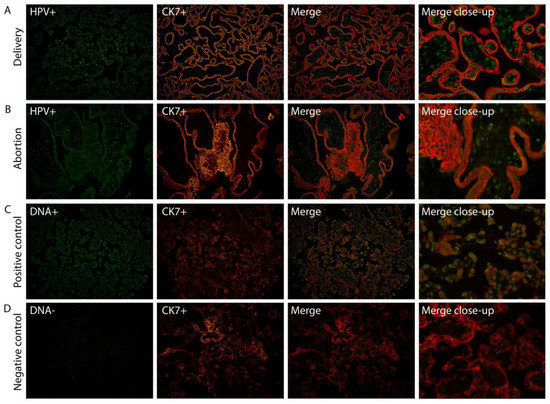