A Comprehensive Review of Common Bacterial, Parasitic and Viral Zoonoses at the Human-Animal Interface in Egypt
Previous Article in Special Issue

KSHV and the Role of Notch Receptor Dysregulation in Disease Progression

Kaposi’s sarcoma-associated herpesvirus (KSHV) is the causative agent of two human cancers, Kaposi’s Sarcoma (KS) and primary effusion lymphoma (PEL), and a lymphoproliferation, Multicentric Castleman’s Disease (MCD). Progression to tumor development in KS is dependent upon the reactivation of the virus from its latent state. We, and others, have shown that the Replication and transcriptional activator (Rta) protein is the only viral gene product that is necessary and sufficient for viral reactivation. To induce the reactivation and transcription of viral genes, Rta forms a complex with the cellular DNA binding component of the canonical Notch signaling pathway, recombination signal binding protein for Jk (RBP-Jk). Formation of this Rta:RBP-Jk complex is necessary for viral reactivation to occur. Expression of activated Notch has been shown to be dysregulated in KSHV infected cells and to be necessary for cell growth and disease progression. Studies into the involvement of activated Notch in viral reactivation have yielded varied results. In this paper, we review the current literature regarding Notch dysregulation by KSHV and its role in viral infection and cellular pathogenesis. View Full-Text
Keywords: KSHV; HHV8; Rta; multicentric castleman’s disease; primary effusion lymphoma; kaposi’s sarcoma; notch; RBP-Jk KSHV; HHV8; Rta; multicentric castleman’s disease; primary effusion lymphoma; kaposi’s sarcoma; notch; RBP-Jk
►▼ Show Figures 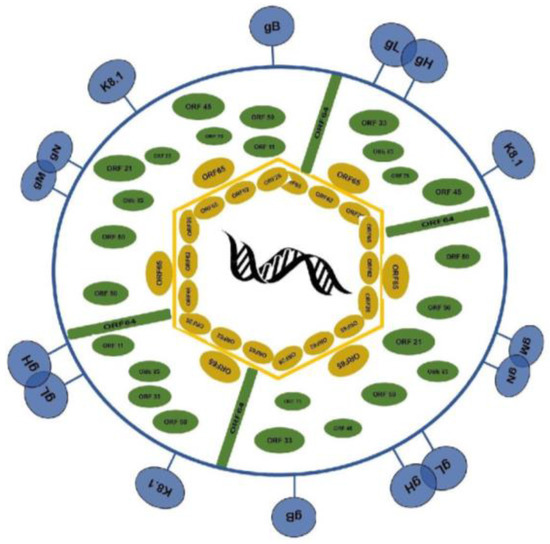