Occurrence and Control of Legionella in Recycled Water Systems

Bacteriophages are regarded as enteric viral indicators in faecally contaminated water systems and may indicate the presence of human viral pollution. They are relatively resistant to inactivation by natural and treatment processes. In this study, the presence of somatic coliphages and F-RNA coliphages was investigated in potable water from rural areas in the North West province. Water samples were aseptically collected from boreholes and tap water from some rural communities in the North West Province. Physical parameters of the water, such as the temperature, pH and turbidity, were measured before sample collection. Double-agar layer assay was performed using ISO, (1995, 2000) standard methods. Bottled water was used as a negative control and the strains фX174 and MS2 as positive controls. Of the 16 water samples collected, 15 were positive for somatic bacteriophages while F-RNA coliphages were detected in only two samples. Amongst the positive samples 189 and three plaque forming units were obtained for both somatic and F-RNA coliphages, respectively. No coliphage was detected in water from Masamane tap 1. The rest of the samples obtained from various rural areas were positive and did not comply with national and international standards for potable water. This was a cause for concern and should be further investigated.
Keywords: somatic phage; F-RNA phage; rural water supply; groundwater; potable water contamination somatic phage; F-RNA phage; rural water supply; groundwater; potable water contamination

In South Africa, the availability of safe and clean water is a serious problem particularly in rural areas in the North West Province. Individuals who live in areas use water directly from available sources without any treatment and, therefore, are exposed to a variety of water-related diseases [1,2,3,4,5,6,7].
The faecal coliform group of bacteria has been used as a water quality parameter and indicator of faecal pollution [8,9,10]. The presence of bacteria of faecal origin in water indicates that other intestinal pathogens could also be present in water. However, the absence of faecal indicator bacteria does not necessarily imply that pathogens are absent [11]. Furthermore, resistance of various pathogenic microorganisms to the water purification process is wide ranging and dependent on many factors. Some pathogenic organisms may survive the disinfection process and land into distribution systems. Moreover, some viruses and parasites are usually more resistant to the water treatment processes than the currently utilized bacterial indicators and therefore may be more reliable for applications that are involved in assessing water quality [12,13,14]. Against this backdrops, somatic coliphages [15,16,17], F-specific bacteriophages [18,19] and bacteriophages infecting Bacteroides fragilis [12,19,20] are currently used as suitable indicators of faecal pollution particularly in drinking water systems. These organisms also provide possible indications of the presence of human enteric viruses in water. Monitoring of all pathogenic viruses in water is very important for routine water quality assessment purposes [21]. For this reason, bacteriophages had been included as a valuable parameter for drinking water globally as well as in South Africa [22].
The purpose of this study was therefore, to determine the presence of two types of bacteriophages (somatic coliphages and F-RNA bacteriophages) in potable water sourced from the rural areas of the North West Province. F-RNA bacteriophages (ss RNA linear genome) are similar to Hepatitis A virus (HAV) and enterovirus but very different to rotaviruses (ds RNA fragmented genome) and are considered to be good indicators of the presence of enteric viruses in water that are not specific to humans. Somatic coliphages when compared to F-RNA bacteriophages have been found to multiply in the environment, which limits their use to a large extent [23,24,25].

2.2. Enumeration of Bacteriophages from Water Samples

The isolation of somatic bacteriophages was performed using the double-layer agar plaque assay [26]. Briefly the following approach was used: Top agar consisting of 2.5 mL sterile liquefied tryptone yeast glucose-extract agar (TYGA) containing 1 mL nalidixic acid (Sigma, St. Louis, MO, USA) and 600 µL of calcium chloride (CaCl2; Sigma, St. Louis, MO, USA) was held at 50 °C in a water bath. This was added to a test tube containing 1 mL of the host (E. coli WG5) and 1 mL of the water sample. The absorbance of the host culture was measured at 600 nm at time 0 and after 2 h using a spectrophotometer (Merck Chemicals (Pty) Ltd., Modderfontein, South Africa). Competent cells with an OD of 0.4 to 0.5 were used in the bacteriophage isolation procedure. The liquified agar mixture was poured onto the bottom agar layer (TYGA) that had been pre-dispensed and allowed to set in a 90 mm Petri dish. This procedure was carried out in duplicate. The phage фX174 was used as a positive control strain. The top agar was allowed to solidify before the plates were inverted and incubated overnight at 37 °C. During analysis, one vial of E. coli WG5 host culture was thawed at room temperature and boosted by adding approximately 25 mL of sterile nutrient broth and incubated for 2 h, while shaking at 37 °C. A 5 mL of nutrient broth taken at time 0 was used as a blank reference.

The isolation of F-RNA bacteriophages was also performed using the double- layer agar plaque assay [27]. However, in this case Salmonella typhimurium 3 Nalr (F′ 42 lac:Tn5)] WG49 (ATCC 700730) and bacteriophage MS2 were used as the host culture and control F-RNA phage respectively. Top agar (TYGA) contained 1 mL of calcium glucose, 400 µL nalidixic acid held at 50 °C in a water bath was added to the test tubes containing 1mL of the host culture (WG49) and 1mL of water sample. The rest of the procedure was carried out as previously described in Section 2.2.1.

Table 1 shows the results of the physical properties that was obtained for the various potable water samples analysed while data for both somatic and F-RNA bacteriophages (pfu/100 mL) are shown in the Figure 1. The values obtained for physical parameters were compared to standard reference values on the SANS 241 (Table 1) drinking water quality guidelines [22] that were used by South African authorities to ascertain if the quality of water is in compliance with the appropriate drinking water standards. 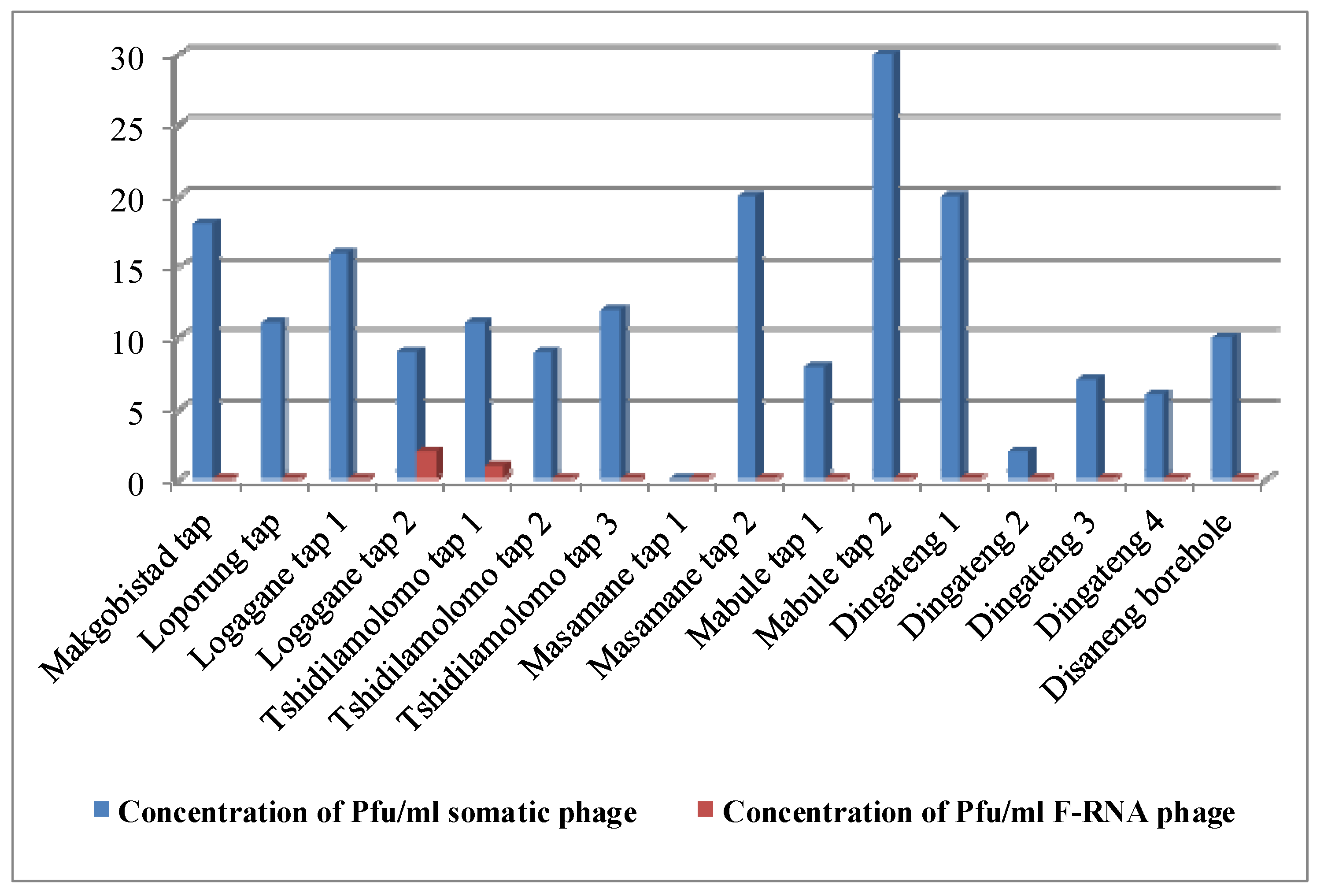 The authors would like to thank the Department of Biological Sciences-North West University, National Research Foundation (NRF), Water Research Commission (WRC-K5/1966) and Medical Research Council (MRC) for funding this project. Juan Jofre for supplying with the host strains, Maureen Taylor and Raquel Casas for assisting with the methods in the laboratory, Johannes Morapedi for assisting with the collection of samples and Faheem Ahmad for reviewing the manuscript.