Metabolism of Cholesterol and Bile Acids by the Gut Microbiota

The human gastro-intestinal tract hosts a complex and diverse microbial community, whose collective genetic coding capacity vastly exceeds that of the human genome. As a consequence, the gut microbiota produces metabolites from a large range of molecules that host’s enzymes are not able to convert. Among these molecules, two main classes of steroids, cholesterol and bile acids, denote two different examples of bacterial metabolism in the gut. Therefore, cholesterol is mainly converted into coprostanol, a non absorbable sterol which is excreted in the feces. Moreover, this conversion occurs in a part of the human population only. Conversely, the primary bile acids (cholic and chenodeoxycholic acids) are converted to over twenty different secondary bile acid metabolites by the gut microbiota. The main bile salt conversions, which appear in the gut of the whole human population, include deconjugation, oxidation and epimerization of hydroxyl groups at C3, C7 and C12, 7-dehydroxylation, esterification and desulfatation. If the metabolisms of cholesterol and bile acids by the gut microbiota are known for decades, their consequences on human health and disease are poorly understood and only start to be considered. View Full-Text
Keywords: coprostanol; secondary bile acids; deconjugation; epimerization coprostanol; secondary bile acids; deconjugation; epimerization
►▼ Show Figures 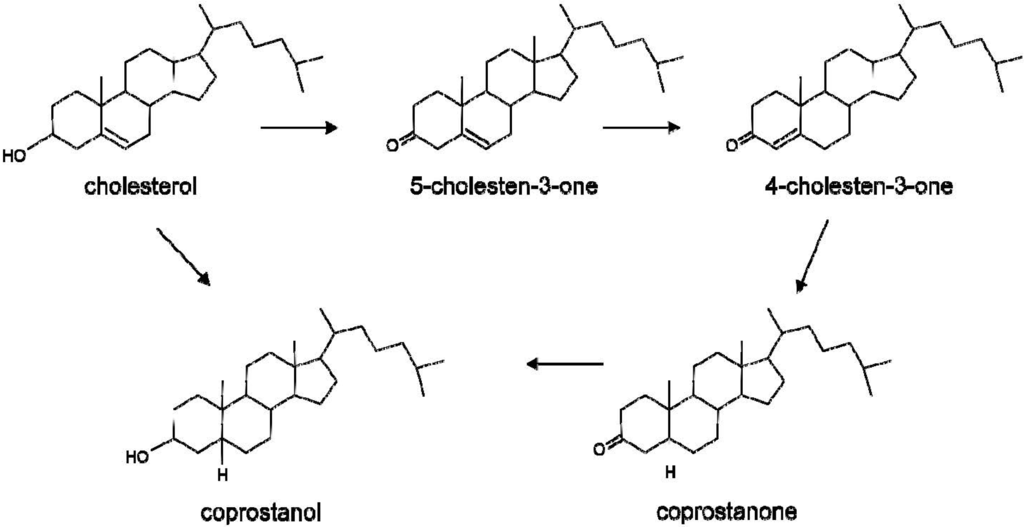